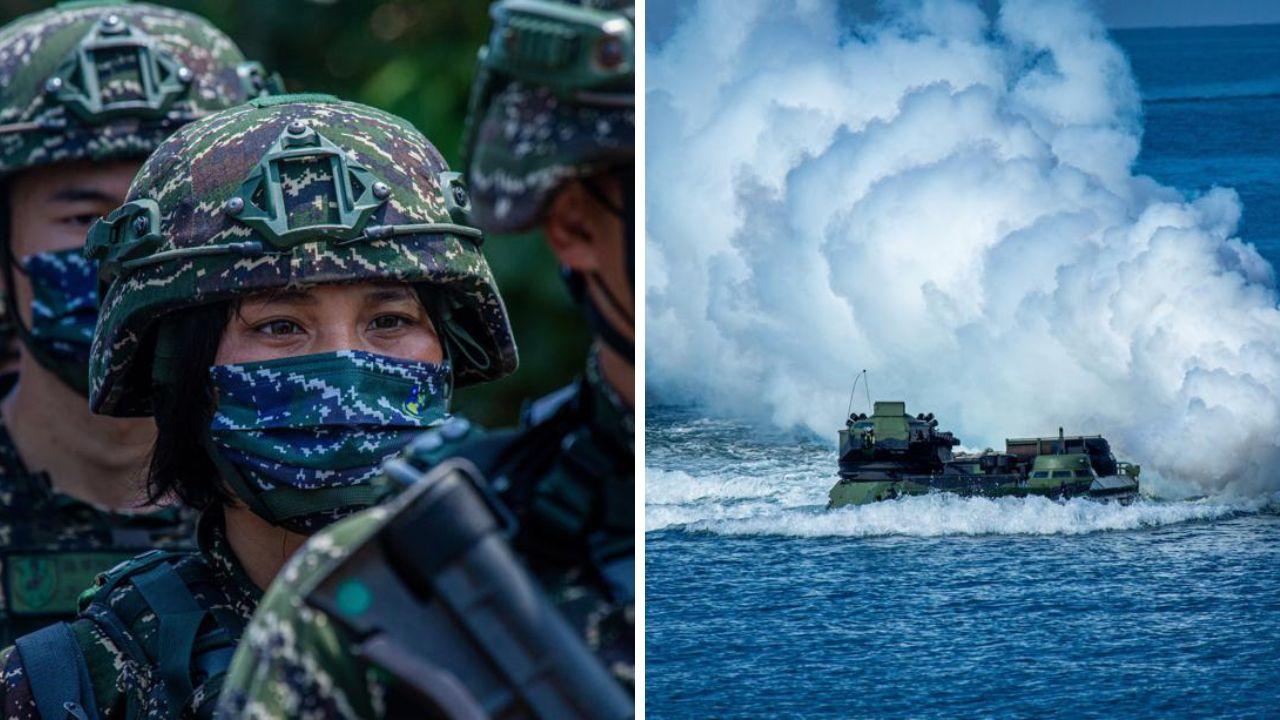 It’s increasingly obvious China is thinking the unthinkable – taking on the United States military, and winning. But is it possible?

The Centre for Strategic and International Studies (CSIS) is running war games in Washington. They’re trying to figure out what chance the West has of defending Taiwan.

On the surface, things look good.

“The results are showing that under most – though not all – scenarios, Taiwan can repel an invasion,” CSIS senior adviser Mark Cancian says. “However, the cost will be very high to the Taiwanese infrastructure and economy and US forces in the Pacific.”

Beneath that “however” lies a vast realm of uncertainty.

The war games do not take into account every factor needed to fight for the beleaguered young democracy. Such as having the capacity to put military forces in place and sustain them.

“The outcome of a Chinese maritime blockade of Taiwan scenario, in which a US-led coalition aids Taiwan’s military to break the blockade and keep the island viable, may be too close to call,” defence and strategy researcher Michael O’Hanlon says.

“It is conducting large-scale military exercises and missile launches, as well as cyber attacks, disinformation, and economic coercion, in an attempt to weaken public morale in Taiwan.”

The US Pentagon, however, reasserted its assessment that China is unlikely to make such a move – within the next two years.

But, in a new study for the Brookings Institution, Dr O’Hanlon argues the strategic, economic and military balance has become so complex that neither side can be sure of anything.

“Many thousands of personnel would likely die, and escalation risks would be huge given the stakes at hand,” he concludes. “This is a war that needs to be deterred and averted. It would not end in some notional great finish that somehow resolves the Taiwan issue once and for all.

The dogs of war

The message is loud, clear – and frequent: China rejects the current world order.

And it’s willing to use its enormous military to impose its will wherever it feels necessary.

“In the 15 years I’ve been watching the Chinese military, 13 of those they have said that they couldn’t beat the United States. So it’s only recently that we see Chinese discourse saying that they can possibly win,” Stanford University international studies expert Dr Oriana Skylar Mastro says.

When Beijing ended its live-fire exercises surrounding Taiwan this week, it issued a policy white paper emphasising “peaceful reunification”. But it reserved the right to use force if judged necessary.

And it’s increasingly looking as though that will be the case.

Just 2 per cent of Taiwanese identify solely as Chinese – down from 25 per cent just a decade ago. And that’s largely thanks to Beijing’s brutal crackdown on the former democracy of Hong Kong.

On Wednesday, China’s ambassador to Australia told the National Press Club that such polls were misleading. And the Communist Party regularly expresses the conviction that Taipei can be coerced into capitulating – especially with the impending “inevitable” collapse of the US.

But the risks of war are high. Victory is not yet guaranteed.

It would take an invasion force of extraordinary scale to cross the Taiwan Strait successfully – and breach Taiwan’s long-prepared defences.

And the last thing the Chinese Communist Party – especially Chairman Xi Xinping – needs is to suffer a humiliating defeat.

“For China, an attempted amphibious assault would be a huge risk, with no going back if the effort failed,” Dr O’Hanlon says. “Xi Jinping or any Chinese leader would have to assume that if they authorised the attempt and it failed, they would be driven from power.”

The Brookings Institution analysis focuses on an attempt to blockade Taiwan within the next seven years, using weapons systems already in use or entering service.

“Many Americans still seem to think that the United States could prevail in defending its faraway friend,” Dr O’Hanlon says. “In contrast, Chinese thinkers seem increasingly confident that the US-China military balance is shifting in their favour.”

Xi now has the world’s most numerous navy – if not the most powerful. His air force is extensive and capable. And his army has largely been re-equipped and retrained.

“As with Putin’s claim that Ukraine is ‘not a real country’, perhaps we should take President Xi at face value and plan accordingly. That means anticipating a looming invasion of Taiwan,” warns Centre for European Policy Analysis (CEPA) deputy director Joel Hickman.

Victory would give Beijing a stranglehold on Taiwan’s main export product – computer chips. And the recent Covid pandemic demonstrated China is already the sole source of a multitude of critical products.

“It doesn’t take Nostradamus to conceive a nightmare scenario where China blackmails the West by using its grip on critical industries and global supply chains in much the same way Russia has with energy supplies across Europe,” Mr Hickman adds.

Xi appears to be echoing many of President Putin’s ambitions of empire.

“Chinese President Xi Jinping appears to be on a mission to reunify Taiwan with China on his watch and to do so sooner rather than later,” Dr O’Hanlon says.

And Xi’s not likely to tinker around the edges by invading tiny islands in the South or East China Seas, he adds. “Indeed, seizing small islands could cost China greatly in international opprobrium [condemnation] and possible retaliation, without addressing the matter of central concern [Taiwan].”

The irrelevance of capability

In a shooting war with China, the United States and whatever allies commit to the fight will start with a significant handicap.

The Taiwan Strait is just 160m wide at its narrowest point. That puts much of the island within quick reach of China’s combat aircraft and missiles.

Any attempt to support Taiwan will therefore have to run an immense gauntlet of submarines, ballistic missiles and air attacks. And warships such as Australia’s air warfare frigates – after firing their 48 missiles – will have to travel thousands of kilometres to re-arm.

“So the problem is that China knows how we fight wars,” Dr Mastro says. “And so their view is just don’t let the United States bring all that stuff in. Don’t give them time to do it.

A recent study predicted US fighters could shoot down 13 Chinese aircraft for every one of their own losses. “So what China learned from that is just put holes in their runways so they can’t take off,” she says.

That is evident in the CSIS war games.

“To get a sense of the scale of the losses, in our last game iteration, the United States lost over 900 fighter/attack aircraft in a four-week conflict. That’s about half the [US] navy and air force inventory,” he says.

Mr Hickman goes one step further and says there’s an inherent weakness in the West’s military strategy of technological superiority.

“The F-35 may host impressive capabilities, but its complexity has meant the program is running years late and well over budget,” he says. “Our competitors (namely China) have a rather different strategy of mass producing much cheaper platforms which can simply overwhelm more sophisticated systems.”

It’s the same strategy that the US successfully used against Nazi Germany and Imperialist Japan in World War II. Now, in a war over Taiwan, Communist China may find itself in a similar position to modern Ukraine.

Moscow has advanced equipment. But Kyiv controls the battlefield.

“[China has] what we call anti-access area denial capabilities. They need one missile that costs, you know, a few million dollars to take out billions of dollars of aircraft carriers,” Dr Mastro warns. “So even though the US military is more capable, it’s somewhat irrelevant.”