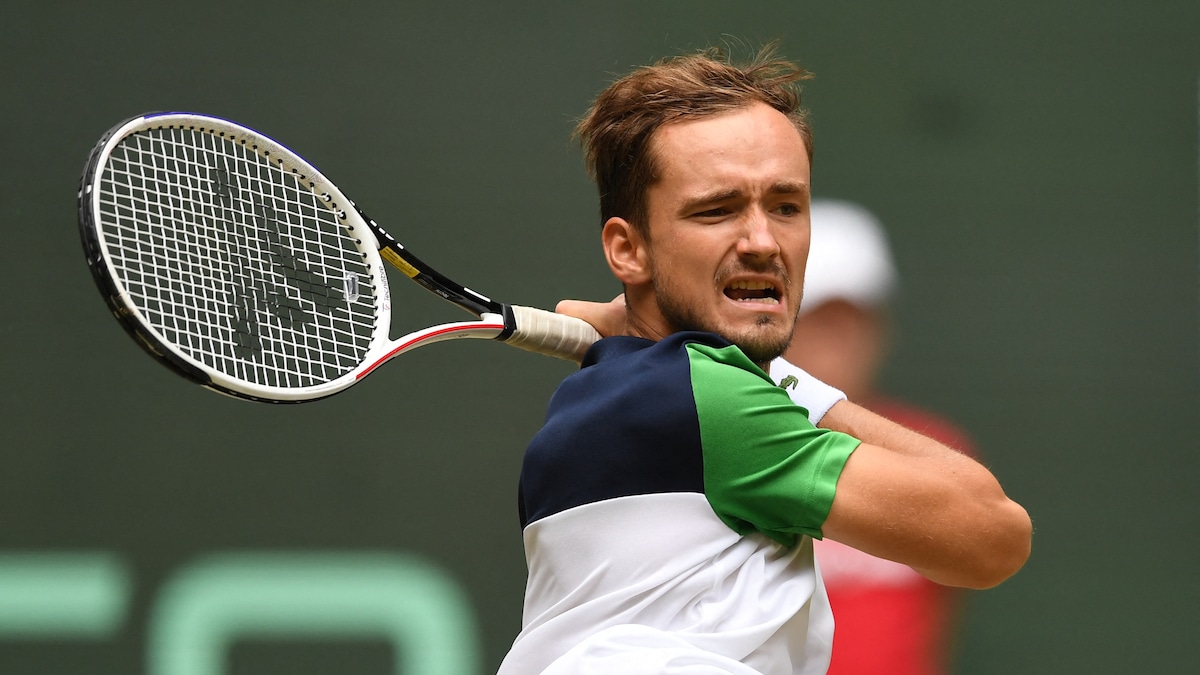 It’s been nine years since Sergiy Stakhovksy stunned Roger Federer at Wimbledon in a Centre Court seismic shock. This weekend Stakhovksy is 2,500km away from London, dressed in fatigues rather than tennis whites. The 36-year-old is armed, desperately fighting to hold back Russia’s invasion of Ukraine. “This used to be us…. Now this is our @Wimbledon…Last night 62 rockets were launched to attack different cities in Ukraine.. #stoprussia #boycottrussia #helpukraine @TheDolgo,” tweeted Stakhovsky.

In his tweeted photographs, Stakhovksy is seen shaking hands with Federer after his 2013 victory.

Also pictured is Ukrainian compatriot Alexandr Dolgopolov after his match against Federer at Wimbledon in 2017.

Both men are retired from tennis; both are now in the military.

Wimbledon, which starts on Monday, has banned all Russian and Belarusian players from this year’s tournament.

That ruled out men’s world number one Daniil Medvedev and eighth-ranked Andrey Rublev.

On the women’s side, three of the top 20 are missing — Aryna Sabalenka, Daria Kastakina and two-time major winner and former number one Victoria Azarenka.

However, six-time Wimbledon champion Novak Djokovic believes that would be a step too far.

“I just don’t see how they have contributed to anything that is really happening. I don’t feel it’s fair,” said Djokovic, adding that Russian and Belarusians be allowed to play under neutral flags.

That’s what happens in the week-in, week-out ATP and WTA tours.

When Wimbledon announced its ban, the two tours retaliated by stripping the tournament of ranking points.

“In terms of the response from the ATP, I didn’t really agree with it. I just don’t see who it helps,” said two-time Wimbledon champion Andy Murray.

“All the players have still showed up to play here, so I don’t see how it puts the ATP in a stronger position moving forwards.”

In a further move, Wimbledon said it will provide tournament tickets to Ukrainian refugees living in the local areas of south-west London.

That humanitarian gesture, however, hasn’t softened Nick Kyrgios’ belief that the ban was ill-advised.

“I don’t think it was a good idea to ban the Russian players. Medvedev is the best we have in our sport right now,” said the Australian player.

“Whenever we have cameras on and a lot of people tuning in, you want our best players to be on showcase for the sport to grow.

US superstar Serena Williams opted to sidestep the controversy.

“Another heavy subject that involves a tremendous amount of politics, from what I understand, and government. I’m going to step away from that,” said the seven-time Wimbledon champion.

Despite the official ban, there are still plenty of Russian-born players taking part at Wimbledon.

Alexander Bublik was born in Gatchina and Mikhail Kukushkin hails from Volgograd but they represent Kazakhstan.

Yulia Putintseva and Elena Rybakina also play for Kazakhstan despite being born in Moscow.

One player has got round the Russia-Belarus ban with a last-minute switch.

Moscow-born Natela Dzalamidze, a 29-year-old doubles player, last week changed her nationality from Russian to Georgian and will compete in the women’s doubles at Wimbledon with Serbia’s Aleksandra Krunic.