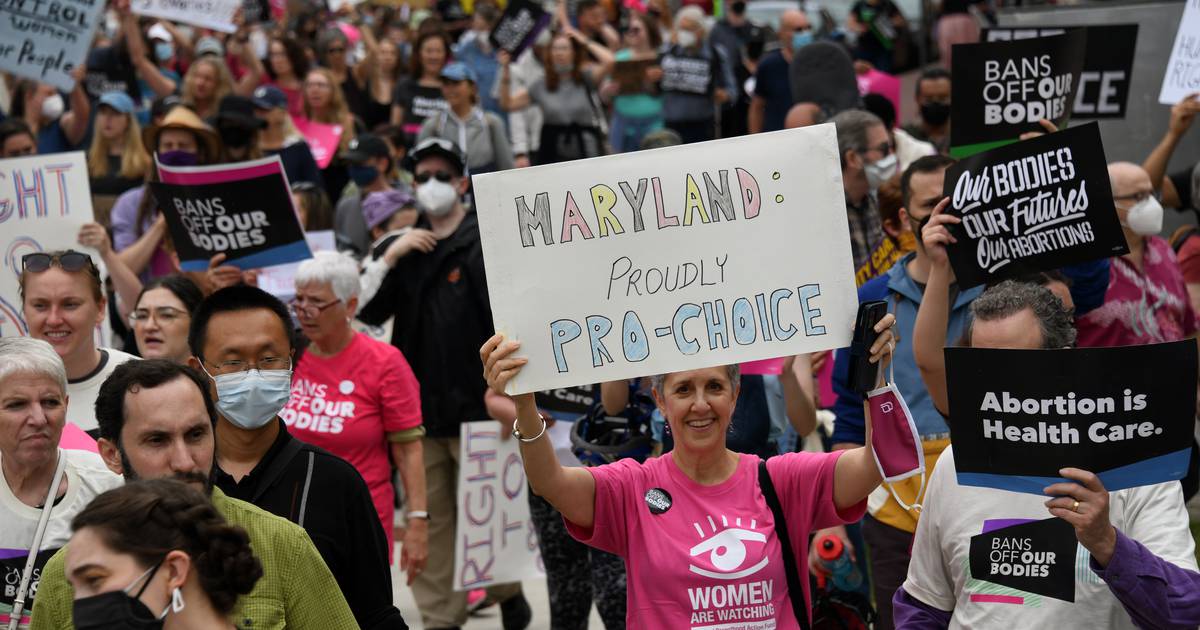 The Supreme Court upended a half century of precedent Friday when it overturned the landmark Roe v. Wade decision that made abortion a constitutional right, shifting the onus to states such as Maryland to provide services.

An estimated half the states are expected to ban or significantly curtail the abortion procedure, and some clinics have already shuttered in anticipation of the court ruling, sending women from places as far away as Texas to Maryland.

Buoyed by public support, lawmakers in the state’s General Assembly already moved this year to bolster Maryland’s system, adding to the workers who would be allowed to provide abortions, setting up training and preparing to accept and fund a greater influx of women from outside its borders.

“From a practical and strategic planning standpoint, we are concerned about the volumes of patients who could potentially come to the state of Maryland, and that’s why we worked hard to shore up our own operations and why we worked with the General Assembly to ensure access,” said Karen Nelson, president and CEO of Planned Parenthood of Maryland.

“There are 36 million women of reproductive health age in the 26 states that could ban or put limits on abortion care, big numbers,” she said. “We have been looking to determine how far patients will travel and from what states. … In the meantime, we are prepared in our health centers to continue to operate.”

Montgomery County Del. Ariana B. Kelly teamed with Senate Finance Committee Chair Delores G. Kelley to shepherd the Abortion Care Access Act through the legislature to expand the abortion workforce, as well as require public and private insurers to pay for the procedure.

But Kelly expressed concern about how the Supreme Court’s move would burden the system in the state and said if surrounding states enact abortion bans more will need to be done.

“We have codified the protections of Roe v. Wade in Maryland,” Kelly said. “However, Maryland is going to be under a lot of pressure. We are the southernmost safe state.”

The national abortion precedent was set in 1973 and held that the due process clause of the 14th Amendment to the U.S. Constitution provided a fundamental right to privacy that protects the right to an abortion. The court further ruled in a 1992 case that states can’t put an undue burden on the right and again in 2016 that states couldn’t allow strict requirements on abortion clinics and doctors.

But the new conservative majority on the Supreme Court used a Mississippi case Friday to overturn Roe entirely though the state law had sought only to ban abortion at 15 weeks of pregnancy. It had been blocked by lower courts for violating the Roe decision. The decision was widely anticipated after a draft decision was leaked in early May.

Friday’s ruling allows states to set their own laws. In Maryland, a person is permitted to have an abortion up until the fetus is viable outside the womb, considered at about 24 weeks, and later to protect the health or life of the pregnant person or for a fetal anomaly. Women already had long traveled to Maryland for more complicated procedures that take place later in pregnancy.

Marylanders on both sides of the political aisle are interested in keeping abortion legal in some form, an early June Baltimore Sun Media and University of Baltimore poll showed. Among Democrats surveyed, 62% support legalizing abortion under any circumstance and 27% under certain circumstances. And while only 18% of Republican respondents said they support complete legalization, 62% were in favor of having abortion remain an option in certain situations. Only 15% of Republicans and 5% of Democrats said they would like to see abortion banned.

Maryland’s standard was adopted by the state in 1991, and a year later a ballot referendum codified the policy, ensuring access to abortions even if the Supreme Court were to overturn Roe v. Wade. Further efforts to enshrine access to abortions in the state constitution as recently as 2022 have failed.

But this year, the Abortion Care Access Act passed and requires the state’s Medicaid system for low-income residents to cover abortions. Private insurers must also cover the services unless they have a religious or legal exemption.

The legislation also allows nurse practitioners, nurse midwives and physicians assistants to perform abortions and provides $3.5 million to train clinicians. The money will become available next year after Gov. Larry Hogan refused to release it early because he opposes non-doctors performing abortions.

Hogan, a Republican, vetoed the legislation but was overridden and the law will go into effect July 1.

The nurses and physicians assistants already are allowed to prescribe medication abortions, responsible for an estimated half abortions now. They will need to train with doctors to become competent to perform traditional abortions but no certification is necessary.

Groups opposing abortion have been working toward the court decision for years on moral or religious grounds.

Del. Nino Mangione, a Baltimore County Republican, called himself “a proud legislator” and praised the decision on Facebook. He called for the legislature to do more to help mothers who proceed with pregnancies.

“They decided to return the power to the people in each state and their elected representatives,” he said. “In all likelihood this will not change things in Maryland. However, I do believe if people were aware of how radical this state and others have become, even some proudly allowing the evil practice of late-term abortion up until pregnancy, more people may change their perspective and more children’s lives would be saved.”

Sen. Jason Gallion, Republican of Harford and Cecil counties, also said on Feacbook, “I applaud today’s decision by the SCOTUS to overturn Roe v. Wade and let individual states make policy decisions. Life is absolutely precious and must be defended. While laws in Maryland are unlikely to change I will always advocate for life because every life is a gift from God.”

U.S. Rep, Andy Harris, a Maryland Republican, tweeted that the Supreme Court “got it right in overturning the incorrectly decided decades-old Roe opinion that treated young human life as not worthy of protection under our Constitution.”

In 2021, Harris, whose district includes Harford County and the Eastern Shore, voted against legislation that would guarantee abortion protections nationally. The measure passed the House 218-211 without any Republican votes, but could not overcome a GOP filibuster in the Senate. Harris, the only Republican member of the state’s congressional delegation, did not return messages on Friday left with his staff.

But many lawmakers, medical groups and activists widely criticized the court ruling for taking away rights of women, potentially harming women who were raped or develop grave health conditions. Medical groups note that some women who miscarry their pregnancies need abortion procedures.

Many also cited the likely impact on low-income people, primarily Black women and other minority groups who will have the hardest accessing services. Nelson at Planned Parenthood said disparities will grow as clinics in some states close altogether, reducing women’s access to health services generally.

Mary Fissell, professor of history of medicine at the Johns Hopkins University School of Medicine, said the court decision, formally Dobbs v. Jackson Women’s Health Organization, is part of a historical “cycle of tolerance and repression” when it comes to abortion.

There’s evidence that the procedure, while illegal, was tolerated in Baltimore from the 1920s to the mid-1940s, then came a national “crackdown” in the 1950s as backlash against women who worked during World War II. Then birth defects from viral infections led the medical and faith community to seek a return to the procedures in the 1950s in Maryland, which then liberalized abortion law in the 1960s. Roe v Wade in the 1970s enshrined the right until Friday.

When there are crackdowns against abortion, the most vulnerable people stand to lose the most, Fissell said.

“It’s the women with fewer resources who are gonna get really hurt,” she said. “And women will die, because what we see over the long haul is women will always terminate. Always. It’s always an option. There’s always pregnancies they can’t carry through. And they’ll go back to the unsafe methods. And that’s just heartbreaking.”

Margaret Johnson, law professor and co-director of the Center on Applied Feminism at the University of Baltimore School of Law, said other rights also are now at stake.

She called Friday a “demolition day” for privacy rights protecting intimate relationships, especially given Justice Clarence Thomas called for a reevaluation of previous court rulings that enshrined the right to contraceptives and gay marriage in the United States.

”This is the beginning of tearing down this entire line of cases and law that has protected people’s ability to form families and have intimate relationships and deal with their bodies in the way that they choose to,” she said.

Federal and local lawmakers are now looking at options to counter the abortion decision, including U.S. Sen. Chris Van Hollen, the Maryland Democrat.

“Today’s outrageous ruling from the far-right packed Supreme Court jeopardizes the health of millions of women around our nation,” he said.

He and other abortion rights supporters have unsuccessfully pushed Congress to approve the Women’s Health Protection Act, the bill opposed by Harris that would lock in abortion rights. They fear if Republicans gain a majority in Congress they will pass a national law banning abortions, which would override Maryland’s law.

“History will show this to be one of the worst decisions ever by the Supreme Court of the United States,” said Democratic U.S. Sen. Ben Cardin of Maryland, who is also a co-sponsor of the federal act.

Van Hollen said abortion would be “a big issue in the upcoming elections around the country.” In the meantime, he said he and others have urged President Joe Biden to use his authority to make it easier for women “trapped” in states where abortion is banned to access the procedure.

Two weeks ago, Van Hollen joined two-dozen other senators in a letter urging Biden to “immediately issue an executive order directing the federal government to develop a national plan to defend Americans’ fundamental reproductive rights, including their right to an abortion.” The senators’ proposals included providing travel vouchers for women seeking abortions outside of their home states, and increasing access to medication abortions.

In Maryland, Senate Judicial Proceedings Committee Chair Will Smith unsuccessfully sponsored a bill to give legal protections to clinicians and patients and said he’d reintroduce the legislation next year. He said he also favors enshrining the right to abortion care in the state constitution.

Del. Sandy Rosenberg, a Baltimore City Democrat, said the legislature will also need to consider who to protect residents who run afoul of other state laws.

House Speaker Adrienne A. Jones sponsored legislation during the 2022 session to allow Marylanders to decide if access to abortion should be enshrined in the state constitution when they hit the polls in 2022. The bill passed out of the House chamber but made little headway in the Senate.

Asked why the bill stagnated, Senate President Bill Ferguson told reporters in late March that his chamber would not be taking up the referendum bill because the right to abortion services “is not something that is contested here in the state of Maryland.”

”The big issue that we have is access,” he said.

Jones announced on Twitter Friday that she will reintroduce the ballot referendum bill.

“One of the issues we’re looking at for next session is how to prevent people from suing anyone in Maryland who assisted in providing an abortion for a resident of Texas,” he said.

In Baltimore, Mayor Brandon Scott said the future will come down to who votes.

“This election cycle couldn’t be more important,” he said. “If, like me, you support women’s rights, make sure your voice is heard on the ballot.”