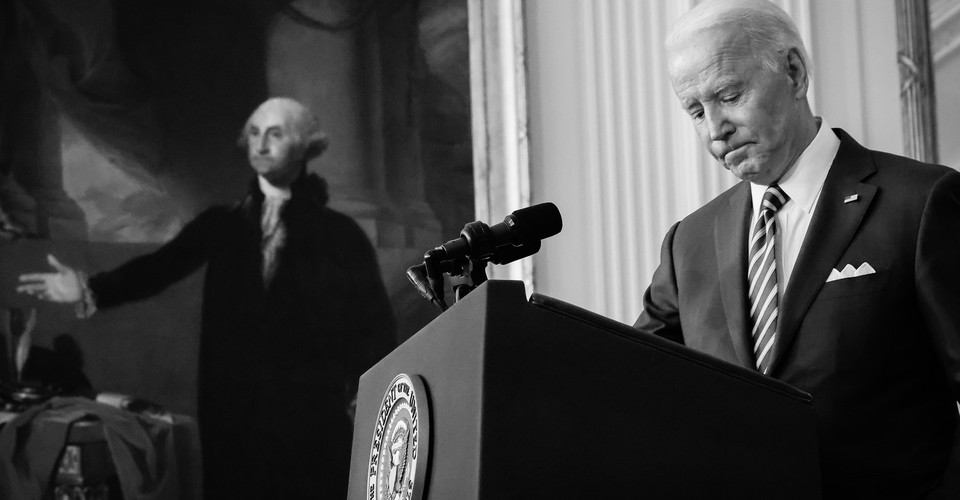 On the eve of the January 6 insurrection, the twin special-election victories by Raphael Warnock and Jon Ossoff of Georgia gave Democrats the Senate majority they desperately wanted, and simultaneously burdened incoming President Joe Biden with something far more fickle: hope and expectations.

Tonight, the possibilities opened up by that winning night in Georgia closed shut in a pair of Senate votes that revealed, more starkly than at any point in the past year, just how limited the Democrats’ power really is. First, after a year of new voting restrictions in red states, Republicans blocked a vote on a landmark elections bill, the Freedom to Vote: John R. Lewis Act. Then two Democratic holdouts, Senators Joe Manchin of West Virginia and Kyrsten Sinema of Arizona, thwarted their party’s bid to change Senate procedure to circumvent the GOP filibuster.

True to the Senate’s rituals of anticlimax, the failed votes proceeded as everyone expected, and the recriminations against Biden had begun well before the roll was called. Why had the president leaned so hard into a doomed fight? If passage of a voting-rights bill was so vital to the future of American democracy, why didn’t Biden prioritize it earlier, before his approval rating tanked and when he might have been popular enough to muscle it through? How could the president submit to yet another public humiliation, especially so soon after Manchin killed off his other top legislative priority, the Build Back Better Act? Is Joe Biden some sort of masochist?

The answers go back to January 5, 2021. The narrow majority-making wins conferred on Democrats just enough power to set an ambitious congressional agenda and all but forced Biden to pursue it. Yet they did not actually give the party enough votes to make it law. Sinema and Manchin staked out their positions firmly in support of the filibuster’s 60-vote threshold within weeks of Biden’s inauguration, and despite months of public debate and pressure from progressive activists, neither senator offered Democrats any real opening. Democrats may have had the Senate majority by virtue of their 50 seats and a tiebreaking vote from Vice President Kamala Harris, but not once in the past year did they have more than 48 votes for changing the filibuster.

A similar dynamic has unfolded with the Build Back Better bill. Biden’s embrace of a transformative progressive vision for social and climate policy obscured the fact that his $3.5 trillion proposal had never won an endorsement from the two most moderate members of the Senate Democratic caucus. Even as the party seemed to have won over Sinema for a more modest bill and appeared to be on the verge of nailing down Manchin’s support, the West Virginia senator’s consistent public critique of the legislation made clear how far apart the two sides remained.

A few hours before the Senate voted, Biden was asked, during a rare formal press conference to mark his first year in office, whether he had overpromised.

“I don’t think I’ve overpromised,” the president replied, adding that he believed he had actually outperformed expectations. “I’m not asking for castles in the sky. I’m asking for practical things that the American people have been asking for for a long, long time. And I think we can get it done.”

Predictably, Biden’s struggles at the one-year mark of his presidency have spawned an endless stream of second-guessing about the priorities he pursued. Yet none of the alternate paths were likely to be any easier, or more successful. Why didn’t he push voting rights in the spring, long before he had drained some of his political capital? For starters, that probably would have required him to put voting rights ahead of the $1.9 trillion American Rescue Plan—the sole major legislative proposal of Biden’s that Democrats adopted nearly in its entirety, and that few if any in the party regret. The president secured Manchin’s support for the legislation, but it came at a cost: Manchin demanded that Democrats return to a Senate process that included Republicans, essentially ruling out an immediate partisan move such as gutting the filibuster to pass voting rights.

Manchin’s posture last spring deflated another popular what-if from progressives, who believe Biden wasted precious time negotiating a $1 trillion infrastructure package with Republicans. They wanted him to ditch the GOP and put all of his energy into passing an even bigger Build Back Better plan (that would have included an infrastructure component) using the Senate reconciliation process that skirts the filibuster. Yet that, too, assumes that Manchin and Sinema—both negotiators of the bipartisan bill—would have gone along with that approach. Perhaps a more likely outcome is that instead of winning the passage of one out of two major proposals, Biden would have wound up with nothing. The same logic applies to the suggestion that Democrats should have prioritized the passage of a climate-only bill. It’s possible that strategy would have yielded more success, but far from guaranteed.

Read: What Joe Manchin’s ‘no’ means for Biden’s agenda

Another Biden alternative would have taken him to the center rather than the left from the outset of his presidency. He could have tempered progressive dreams at the start, explaining that the ultrathin Democratic majorities in the House and Senate offered the party no mandate for transforming the social-safety net and required bipartisan cooperation. His proposals would have been more modest; his outreach to the Republicans, more robust. This approach could have won him the same bipartisan infrastructure bill he passed anyway, and possibly some other smaller legislative wins. Perhaps his standing with independent voters would not have cratered so dramatically.

But few Senate Republicans are eager to partner with the president, willing to give him victories that would boost his standing. Barack Obama learned that the hard way. Moreover, the howls from liberals would have started immediately, and by now, a year later, they’d be deafening. How could Biden squander the one, two-year window Democrats might have to govern in the next decade?, they’d ask. How could he not even try to counter Republicans who are passing state laws making it easier to suppress voting and subvert elections? What is the point of having a majority at all?

A more centrist legislative agenda also would not have stopped the Delta and Omicron variants from dashing Biden’s promise to “crush” the coronavirus pandemic and restore normalcy and prosperity to the American economy—factors that are likely the biggest contributors to his unpopularity. Nor would centrism have reversed the historical patterns that typically lay waste to a president’s party during his first midterm election. The alternate history most likely to have lifted Biden’s standing at this point in his presidency is one that no Democrat would welcome—a history that gave Republicans one or two victories last January 5 in Georgia, and with them a share of power and responsibility in Washington. That outcome, however, would certainly have watered down if not destroyed the Democrats’ $1.9 trillion COVID relief package from last spring, potentially leaving the economy in even worse shape. And it would have squelched entirely both the Build Back Better Act and their voting-rights overhaul.

Although Biden’s economic plan as a whole appears dead, the president today signaled that he would make a new push for the passage of “big chunks” of the package. Any legislation Biden can enact on a party-line vote would be possible only because of the Democratic advantage. Finally, the party’s relative unanimity on nominations has allowed Biden to win confirmation of dozens of federal judges—the most for a president since the Reagan era—that a GOP majority would have been much less likely to approve.

Biden’s lowly standing at the moment—his approval rating has been hovering in the low 40s, but a recent Quinnipiac University poll put it at an astonishing 33 percent—has left him without much strength to twist arms and vulnerable to the embarrassments he has suffered in the past month. This evening’s defeat allows the president to prove to progressives his commitment to voting rights, and leave them with an issue to campaign on this fall. The Senate majority that the Democrats won last year has helped Biden substantively, but not politically. It has proved no match for the scale of the party’s ambitions, and heading into tonight’s votes on voting rights and the filibuster, defeat was inevitable. Given the alternatives, however, Biden had no choice but to try.