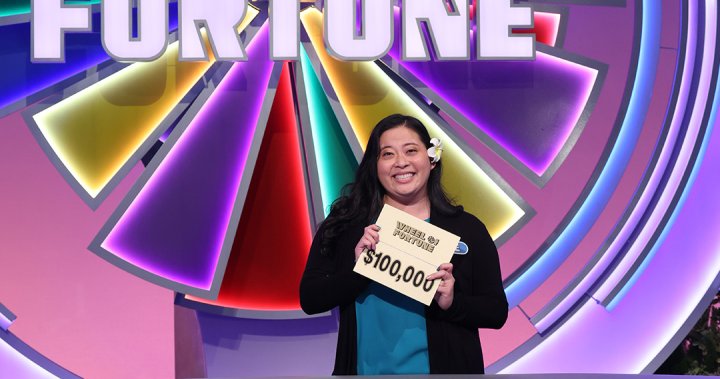 Wheel of Fortune had a new record set on Wednesday after a contestant became the third this week to cash in on the $100,000 grand prize.

Bree Yokouchi, an elementary school teacher from Portland, Ore., pulled the $100,000 grand prize envelope from the Bonus Wheel and completed her puzzle to claim the prize.

“I was just excited to be here this morning,” Yokouchi said in a statement. “But to be the third $100,000 winner in a row is just amazing!”

Host Pat Sajak joked that he was going to leave the show, tossing the winning card behind him and briefly walking off the set. “I’m out of here. That’s it, I’m through,” he said.

“How are they doing this?” he also asked, clearly shocked.

Lisa Kramer and Mark Baer were the other two contestants that struck the $100,000 payday this week.

After Wednesday’s win, the gameshow joked on Twitter that it was “running out of confetti.”

WHAT?! 🤯 Another historic night! Bree is our 🎉🎉🎉 THIRD $100,000 WINNER IN A ROW! Breaking News: Wheel of Fortune is running out of confetti! 🎉🎉🎉 @KATUNews pic.twitter.com/WSAoBmhi8r

The show also confirmed that the wins set a record – never in the show’s 40-year history have $100,000 wins happened on consecutive nights, let alone in the same week.

Where were you when you experienced Wheel history … again?! Watch Bree, Mark and Lisa win $100,000 back to back to BACK! https://t.co/J6KkFGYVed pic.twitter.com/QRTSDqyeLv

In a FaceTime call with his daughter Maggie on Wednesday evening, Sajak again expressed his surprise.

“I’m running out of words to describe my reaction. Stunned, surprised, I don’t know. It’s all inadequate,” he can be heard saying in the video, which Maggie shared to Twitter.

When Maggie asked her dad if it could happen again he said: “You mean four in a row, Maggie? That would be ridiculous. That would be virtually impossible.”

“You mean like three in a row was virtually impossible?” Maggie asked.

Can lightning strike in the same place four times?