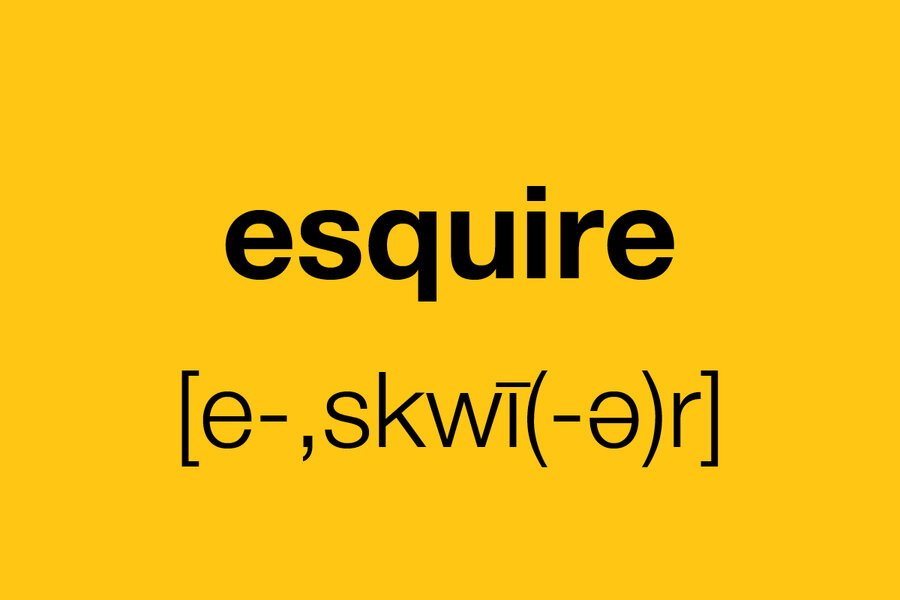 In formal correspondence and in court opinions, attorneys are given the title esq., short for esquire. This seems like an odd honorific, as historically esquires or squires were either young men who helped knights with their armor or low-ranking nobles. How did American attorneys come to adopt this title?

The word squire derives from scūtum, Latin for “shield” – squires were “shield-bearers” for medieval knights who hoped to become knights themselves. These men were called squires for most of the Middle Ages, but esquire began to appear in the 15th century.

Confusion arose at this point because another group of people were also “shield-bearers” – the British aristocracy, who had been granted coats of arms that they could wear on an escutcheon (a fancy French heraldic word for “shield”). Men near the bottom rank of the British nobility, who had such arms but lacked a title such as “baronet” or “gentleman,” were called esquires.

While status was clear among the dukes and earls at the top of the hierarchy, things got fuzzy among the low-ranking nobles. Even the Oxford English Dictionary throws up its hands when faced with the difficulties of defining, exactly, who is “officially” an esquire: “it would be impossible here to state the divergent views on the subject.” In the 18th century it thus became de rigueur to hedge one’s bets and use the title for everyone who might conceivably be important, whether by birth, education, or professional achievement.

The U.S. Constitution prevents the government from issuing titles of nobility, and its officeholders from accepting them, but the not-quite-a-title esquire slipped through. Its use declined in the second half of the 19th century in the United States and Britain, until the only people still interested in being esquires were lawyers. Perhaps it makes sense to want one’s own title in the U.S. legal system, where judges are referred to as “the honorable so and so.”

While there are no official rules about who gets to be called esquire today, the term is conventionally limited to lawyers who have passed their state’s bar exam and are thus licensed to practice law. A lawyer who has graduated from law school but not yet passed the bar should be called “so and so, J.D.” (juris doctor, “doctor of law”) instead.

According to lawyer and language maven Bryan Garner, it’s infra dig to refer to oneself as “esquire” or print “My name, Esq.” on one’s business cards – you just have to hope that other people will give you your due. And finally, he notes that it is correct to use the title for both male and female attorneys. Esquire is a strange remnant of an archaic class system, but at least it’s gender neutral!