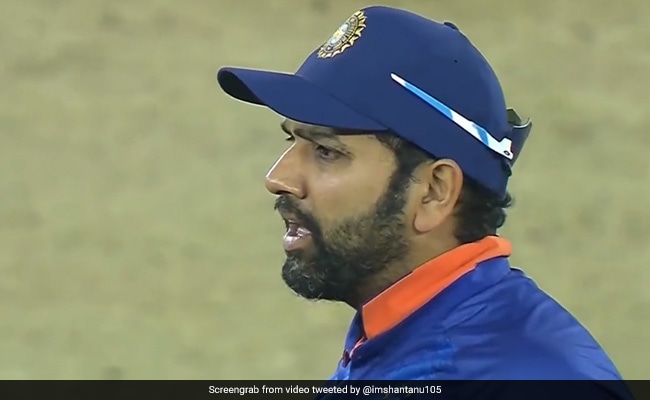 Rohit Sharma the batter faced a rare failure but Rohit Sharma the captain was at his best in the second ODI against West Indies at the Narendra Modi Stadium in Ahmedabad on Wednesday. Rohit’s attacking field placements, his proactive bowling changes, especially the move to bring back pacers Prasidh Krishna and Shardul Thakur when West Indies stand-in captain Nicholas Pooran was just looking to cut loose against the spinners, paid rich dividends for India in the second ODI, which they won by 44 runs to seal the three-match series 2-0. But there was another side of Rohit’s captaincy, which is not often seen, that was visible on the field during the second match. Rohit did not seem too pleased with Yuzvendra Chahal when Washington Sundar was on his mark to start the 45th over of West Indies’ chase.

A video of Rohit showing his displeasure started doing the rounds on social media towards the end of the match. In the video, Rohit was heard saying: “Ek kaam kar, peeche jaa… Kya hua tereko bhaag kyu nahi raha theek se?” (Go backwards… What happened to you, why aren’t you running properly?).

Me to my buddies in Gully Cricket when they get tired after 2 overs of Fielding ???????????? pic.twitter.com/NDIuNWRPY4

Rohit, rarely the one to lose his cool, is closer to the MS Dhoni mould when it comes to leading his troops on the field but his rebuke to Chahal on Wednesday even when India were just inches away from another easy win spoke volumes about the high standards he expects from his teammates.

Rohit, however, was mighty pleased with India’s series victory.

“Winning the series is a good feeling without a doubt,” said Rohit in the post-match presentation.

Rohit said they faced some challenges but the partnership between KL Rahul and Suryakumar Yadav was crucial. India lost their top-order early and it was the 64-run knock from Yadav and a fluent 49 from Rahul that steadied the Indian innings.

“There were some challenges that we had to face today. That partnership between KL and Surya. That is the maturity we need. We got to a respectable total, which was important. With the ball we were outstanding. The entire unit came together and performed together as a unit. It is important for these guys to bat in those kind of situations. That is when you can judge them. Today’s knock with give Surya a lot of confidence. The pitch was not easy. So he batted and did what the team wanted and not what he wants to do. KL too, and that little innings from Hooda in the end,” Rohit added.

India, after putting 237 for 9 on the board, bowled the visitors out for 193 powered by a brilliant spell of fast bowling from Prasidh Krishna, who was adjudged Player of the Match for his 4 for 12.