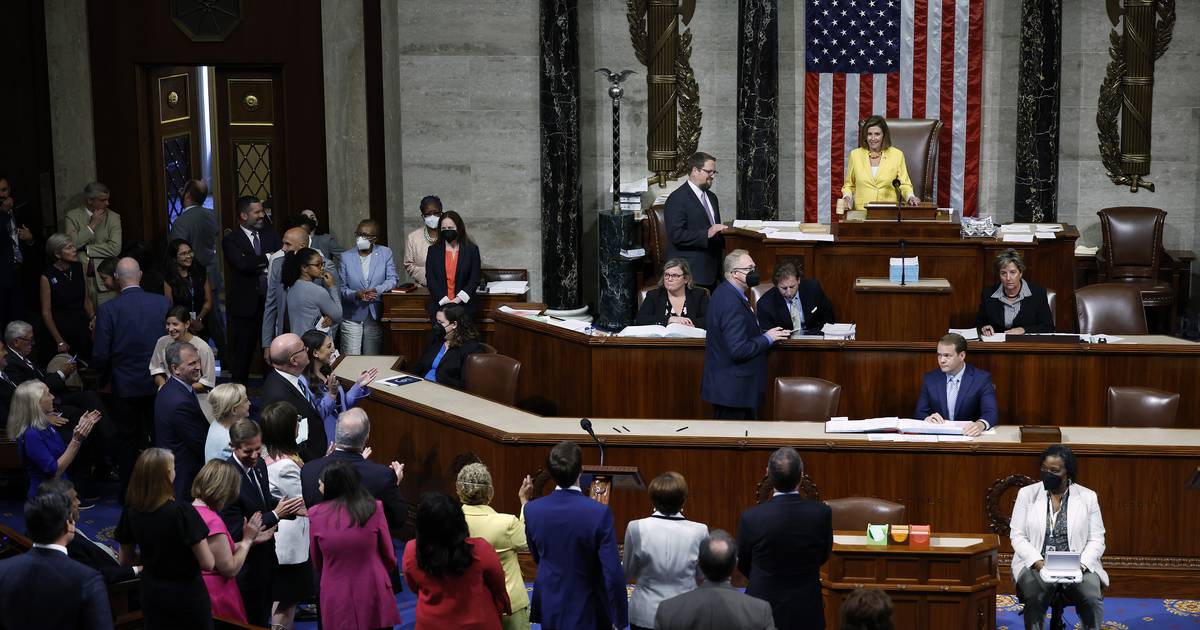 The House passed Democrats’ healthcare and climate spending package on Friday, sending the landmark piece of legislation to US president Joe Biden’s desk and delivering a much-needed political victory for the party ahead of the midterm elections this November.

The Bill passed the House in a party-line vote of 220 to 207, and Democratic members broke into raucous applause as the proposal crossed the finish line.

“Today is really a glorious day for us. We send to the president’s desk a monumental Bill that will be truly for the people,” the House speaker, Nancy Pelosi, said before the final vote. “If you are sitting at your kitchen table and wonder how you’re going to pay the bills – your healthcare bills, your prescription drug bills – this Bill is for you.”

Mr Biden is expected to quickly sign the legislation, which he has celebrated as a significant step toward combatting the climate crisis and reducing Americans’ healthcare costs.

The final House vote capped off a lively debate among members in the chamber, as Republicans attacked the Bill as a reckless spending spree that would fail to address Americans’ financial needs. A number of Republicans sharply criticised the Bill’s provision to increase funding for the Internal Revenue Service, which far-right congresswoman Lauren Boebert compared to “armed robbery on the taxpayers”.

That comment prompted a rebuke from John Yarmuth, the Democratic chairman of the House budget committee. “I would implore my Republican colleagues to cut out the scare tactics, quit making things up and debate the substance of this Bill,” Mr Yarmuth said.

The House’s passage of the Bill came five days after the Senate approved the package in a vote of 51 to 50, following a marathon session that lasted overnight and stretched into Sunday afternoon.

The Bill, formally known as the Inflation Reduction Act, is the culmination of more than a year of negotiations among Democratic lawmakers. The proposal was negotiated behind closed doors by the Senate majority leader, Chuck Schumer, and centrist Democratic senator Joe Manchin, who singlehandedly quashed the Bill’s predecessor, the Build Back Better Act, last year.

House progressives complained that the new Bill is much narrower in scope than the Build Back Better Act, but they ultimately supported the spending package, largely because of its climate provisions. The legislation includes $369bn in funds aimed at expanding renewable energy sources and lowering plant-heating emissions. Experts have estimated the Bill could reduce America’s emissions by about 40 per cent by 2030, compared with 2005 levels.

“This landmark legislation marks the largest ever federal investment in climate action,” Pramila Jayapal, the chair of the Congressional Progressive Caucus, said on Friday. She added: “We think we crafted the best Bill in the world with Build Back Better … So as soon as we get a couple more Democrats, we’ve made the case for the rest of the Bill.”

The Bill also fell short of expectations for some of the centrist members of the House Democratic caucus. Lawmakers from high-tax states such as New Jersey and California had pushed for changes to the limit on federal deductions for state and local taxes (Salt), but they failed to get that policy added to the spending package.

Instead, the Bill includes a number of tax changes to cover the cost of the rest of the proposal. Those policies, including a new corporate minimum tax and a 1 per cent excise tax on stock buybacks, are expected to bring in more than $700bn in revenue for the government.

The Bill previously attracted criticism from progressive Senator Bernie Sanders, who said the spending package did little to help working Americans who are struggling under the weight of record-high inflation. Sanders attempted to expand the healthcare and financial assistance provisions in the Bill during the Senate’s 16-hour vote-a-rama session last weekend, but those efforts were unsuccessful.

Sanders has taken particular issue with the Bill’s provisions aimed at lowering the cost of prescription drugs, which he has said are too limited. The Bill will allow Medicare to start negotiating the price of certain expensive drugs and will cap Medicare recipients’ out-of-pocket prescription drug costs at $2,000 a year, but key provisions meant to help Americans who receive health insurance coverage through the private market were stripped out of the legislation.

Democratic leaders have downplayed criticism of the Bill, instead championing the legislation as America’s most significant effort yet to address the climate crisis. – Guardian