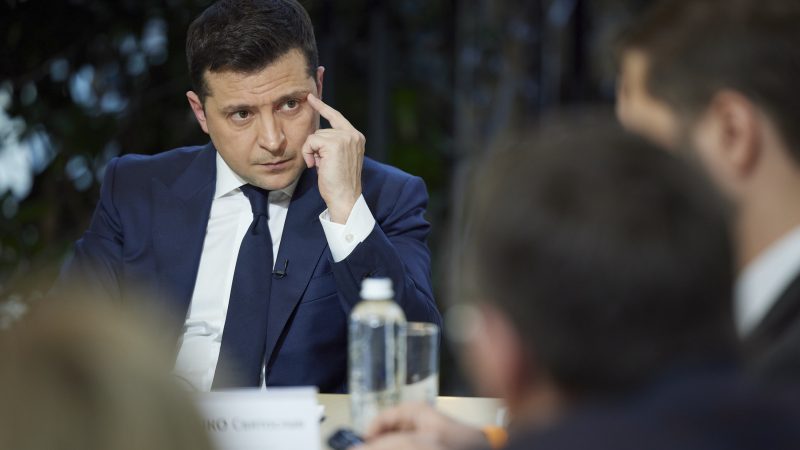 Ukraine has uncovered a plot for an attempted coup with the involvement of Russians, due to have taken place next week, President Volodymyr Zelenskiy said on Friday (26 November) at a press conference.

Zelenskiy did not give full details of the coup plot and did not accuse the Russian state of involvement, though he also spoke at length at the press conference of a threat of Russian military escalation, and said Ukraine would be ready for it.

The Kremlin swiftly denied any role in any coup plot, saying it had no plans to take part in such acts.

Russia has been building up forces near its border with Ukraine. Kyiv, the United States and NATO have voiced concerns in recent days about a possible Russian attack — a suggestion the Kremlin has dismissed as false and alarmist.

“We have challenges not only from the Russian Federation and possible escalation – we have big internal challenges. I received information that a coup d’etat will take place in our country on Dec. 1-2,” Zelenskiy said.

Ukraine had audio recordings as evidence of the coup plot, Zelenskiy added.

Moscow and Kyiv have traded blame for rising tensions in recent weeks, raising fears that a long-running conflict between Ukraine and Russian-backed separatists could erupt into renewed open warfare.

“We are in full control of our borders and are fully prepared for any escalation,” Zelenskiy said.

The head of Ukraine’s military intelligence told the Military Times outlet last week that Russia had more than 92,000 troops massed around Ukraine’s borders and was preparing for an attack by the end of January or beginning of February.

Ukraine, which wants to join the NATO military alliance, received a large consignment of U.S. ammunition and Javelin missiles earlier this year, prompting criticism from Moscow.

Zelenskiy also said his chief of staff Andriy Yermak would soon be contacting representatives of Russia about the standoff between the two countries. Separately, Yermak said he would be contacting senior Kremlin official Dmitry Kozak.