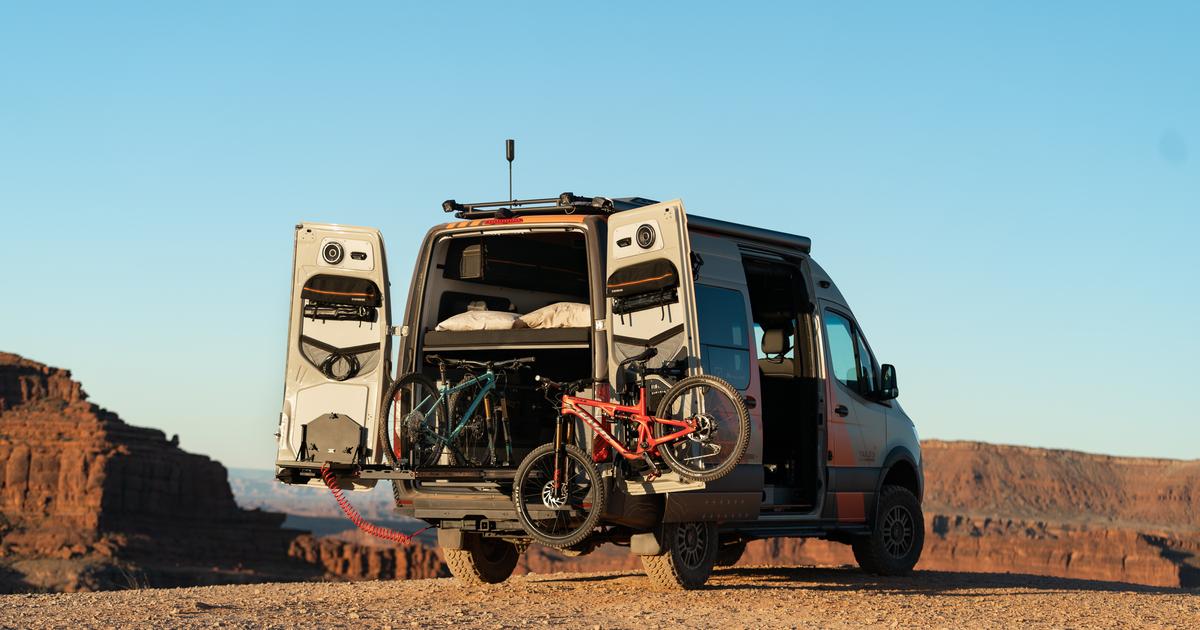 Designed to seek out remote, forgotten trailheads and bushwhackable cross-country routes where trails don’t run, the all-new Tails camper van from Outside Van is a venture-anywhere mountain bike support vehicle and complete base camp. More than just a camper with a couple bike racks, this van comes fully optimized to work as a mobile mechanic’s station, off-grid power plant and cozy mountain cabin. Base-camp and explore like skiers do from backcountry yurts or team up with a few buddy van lifers to shuttle huge descents or string together epic bikepacking expeditions. Whatever the mission, Tails will keep man and machine performing their best.

We’ve seen many camper vans built around carrying bicycles, often in unexpected and clever ways, and a few include a rear-door bike stand or helmet hanger. Outside Van looks to multiply bike carry and in-field repair capabilities with Tails, designing what it envisions to be the “ultimate biking van.”

The Tails van makes its mission known immediately at the rear, where each of the door ladders is equipped with dual-bike carriers. The insides of the two doors are equally bike-friendly, carrying custom-designed tool rolls that drop down for convenient bike tool access. The passenger-side door includes a removable Park Tool repair stand to pull bike repair up to comfortable working level.

To prevent small parts and tools from rolling away and getting eaten by mud or sand, Outside hangs a drop-down workbench with integrated tray compartments on the driver-side door. The bench even includes a built-in leveling system that lets the user fine-tune positioning on uneven ground using a bubble level and tool-free knob screws.

An access point just under the bumper hooks to the ARB air compressor for inflating bike tires. The compression system also includes a four-tire pressure adjustment system for simultaneously adjusting all the van tires for different terrain conditions.

Outside attaches full-length tie-down tracks to the over-wheel-well electrical and water boxes on the load area sidewalls, good for strapping gear down or mounting accessories. The driver-side water box includes an exterior hookup to support a hot/cold outdoor shower for man, dog and gear. Between the power and water boxes, the slide-out gear tray can hold another two bikes or general gear like luggage, body armor and helmets.

With so much time spent sculpting the back of the van into a mobile workshop, you might expect less thought put into the RV amenities. However, Outside does not skimp on innovation up front.

With the bed and garage area extending nearly to the rear edge of the central kitchen, Outside gets creative in squeezing in a rear sofa for dining and relaxing. The front panel of the three-panel over-garage bed drops down and works seamlessly as the cushioned seat back for the sofa bench. A portable toilet stows away in a compartment at the base of the bench.

The kitchen block includes a flush-mounted induction cooktop, stainless steel Isotherm under-counter fridge, sink with countertop cover and flip-up counter extension. A microwave is installed up in the overhead cabinetry.

The kitchen also benefits from storage pockets on the insulated soft wall that separates the driver’s compartment from the camper. This wall helps keep heat from the furnace or cooling from the A/C in the living area where it’s needed. The wall has a roll-up door for easy movement between cab and camper.

Tails is based on America’s favorite adventure van, the Mercedes-Benz Sprinter 144 4×4, and Outside specs it into a more capable explorer able to navigate over every type of dirt and rock short of the singletrack for which the mountain bikes are waiting. Outside adds an Agile RIP suspension upgrade with Fox 2.0 front and rear shocks and heavy-duty leaf springs, a 50-in front LED light bar, a 360-degree area lighting package and a custom roof rack.

The van’s beefy off-grid electrical system powers base camp for days on end via a 945-Ah lithium battery bank and 140-W Zamp Solar panel. When outside of cellular range, a midland radio system with in-cab and portable units picks up the slack in delivering off-grid communications between individual riders and base camp.

One thing we really like about the Tails design is that, while it’s clearly made for bikers first and foremost, many of the solutions are universal or removable, meaning it can readily convert to a surf van, powder-chaser or good ol’ weekend camper. For example, the driver can remove the tool rolls or stock them with alternative tools, use the drop-down bench for non-bike-related work, and store skis or boards in place of bikes on the slide-out tray and through the central pass-through.

We had some serious apprehension about making it down to the pricing section for this flagship-level build, but we never had to encounter that figure. The van is a prototype, and while many of the solutions are available in Outside Van’s regular customization program, some of the newest ones, such as the drop-down workbench, tool rolls and newly designed soft storage sacks, are prototypes that the company will be putting through rigorous testing before deciding whether to add them to its line. Outside explains that it uses such project vans to develop its rapid prototyping capabilities, a process we last peeked in on a few years ago, in order to keep itself at the leading edge of the ever-growing custom camper van market.

Those looking for a more immediate camper van solution can browse Outside’s selection of currently available Sprinter vans, which range between $195,000 and $290,000 as of publishing. Or they can take a look at the scroll of Tails features linked below and start imagining which ones they’d add to an individualized build.

The full video breakdown below takes a look at Outside’s every last thoughtful detail against a stunning backdrop. We did not at all mind spending the 11.5 minutes watching.