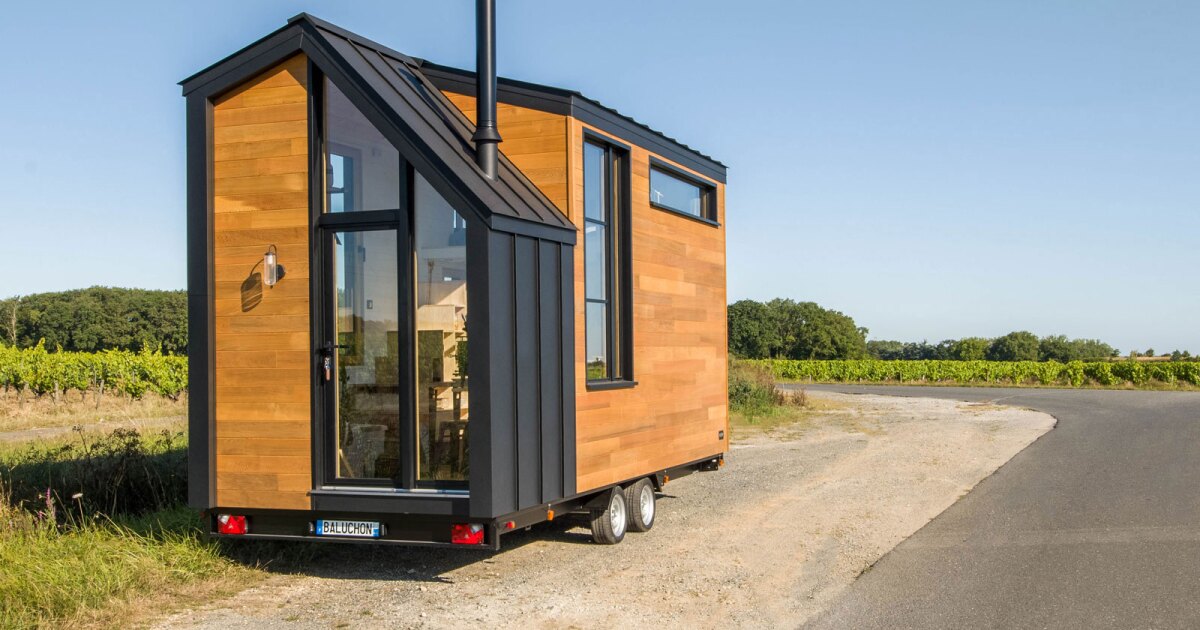 One common complaint concerning tiny houses is that they can all have a very similar look to them. However, Baluchon offers a break from the norm with its Tiny House Sauvage, which eschews the stereotypical cutesy cottage-like appearance in favor of a contemporary light-filled tiny house inspired by Scandinavian design.

The Tiny House Sauvage (or Wild) is based on a double-axle trailer and measures 6 m (20 ft) in length, so is on the small side compared to most North American tiny houses nowadays, but still larger than the recent Freeland Tiny House, for example. It’s finished in red cedar, with black aluminum accenting. Power comes from a standard RV-style hookup and the insulation is a mixture of cotton, linen, and hemp.

Inside, the Scandinavian influence is expressed with light hues and an open layout, as well as simple wooden furniture, resulting in a home that’s quite airy considering its compact dimensions. Visitors enter into the living room, which has a high ceiling and contains seating and a dining table, as well as a very small wood-burning stove. Nearby is a long storage unit that will host the owner’s vinyl and turntable/speaker setup.

The kitchen is simple, as we’ve come to expect with these French tiny houses. It has an oven, fridge, and a two-burner propane-powered stove, plus a sink and some shelving. A small door opens into the bathroom, which has a composting toilet, a sink, shower, and a wardrobe.

There’s just one bedroom in the Tiny House Sauvage and it’s reached using a slightly awkward staircase that was obviously arranged so as to not overly dominate the living room. It also has built-in storage space.

The bedroom itself is a standard tiny house loft-style bedroom with a low ceiling, though does have one small addition: Baluchon has taken a leaf from Build Tiny‘s book and installed a home office area with a desk and a lowered platform to make sitting at a desk easier. It’s still not ergonomic by any means, but will be comfier than sitting awkwardly cross-legged at a desk.

The Tiny House Sauvage serves as full time home for its owner on their land in Mayenne, northwestern France. We’ve no word on its price but Baluchon’s homes usually start at €80,000 (roughly US$80,500).