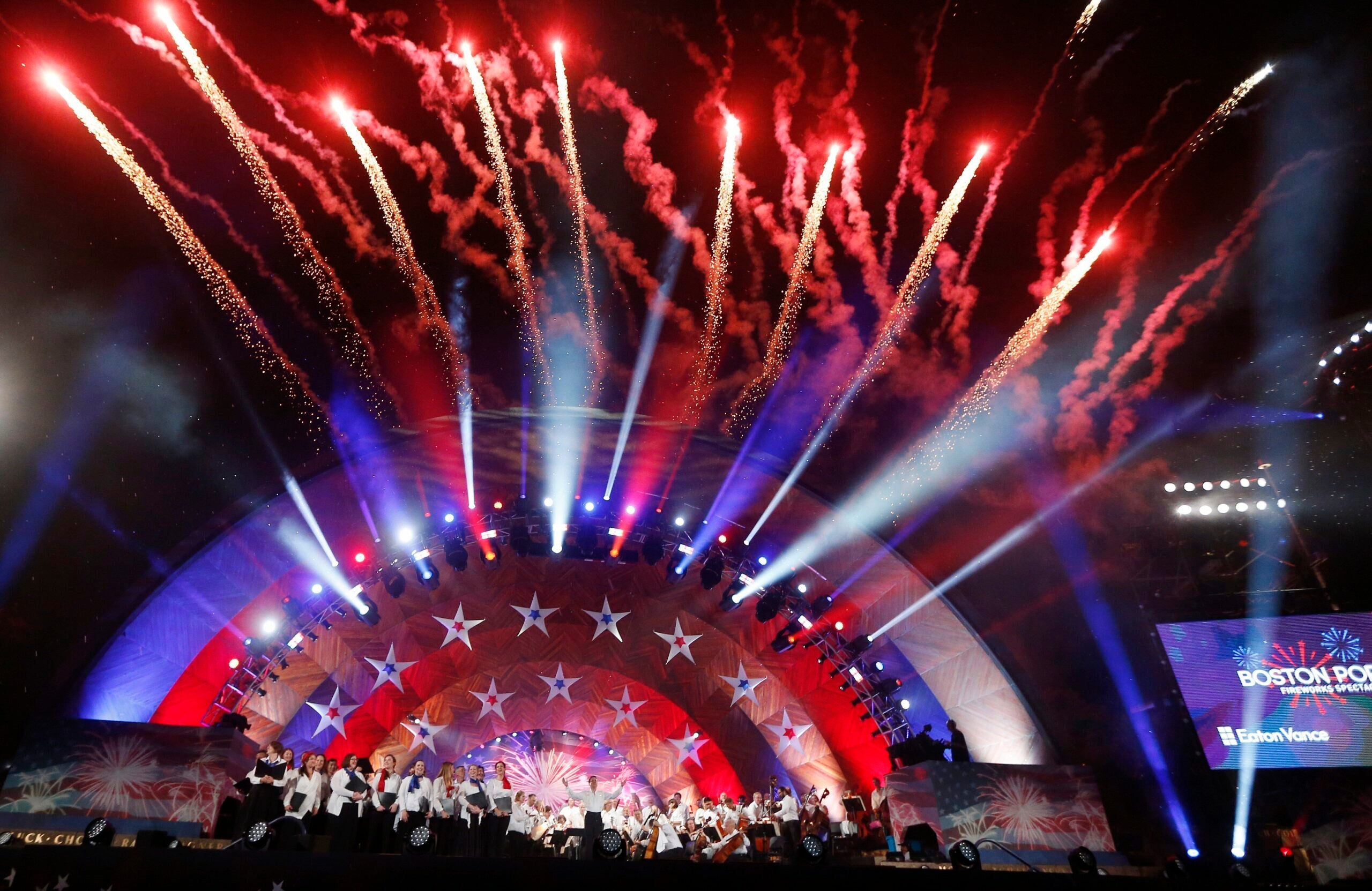 For the first time in three years, The 2022 Boston Pops Fireworks Spectacular will once again bring the sounds of the Boston Pops to the Esplanade on July 4.

As is typically the case, the 2022 Boston Pops Fireworks Spectacular will feature a number of musical guests accompanying conductor Keith Lockhart and the Boston Pops Orchestra. Among the highlights of this year’s event are a performance from 10-time Grammy winner Chaka Khan, a tribute to the country of Ukraine, and a tribute to philanthropist David Mugar, who transformed the modern fireworks spectacular into a nationwide TV event. Mugar passed away earlier this year.

“We are incredibly excited to be returning to the Charles River Esplanade to present the Boston Pops Fireworks Spectacular and to play a unifying role in this great city and country by giving the people of Boston and beyond a wonderful reason to celebrate Independence Day with us,” Lockhart said in a press release. “There is nothing more powerful than music to bring us together as a community in celebration, so we are thrilled to bring you a fantastic lineup of July 4 guest artists — capped by an extraordinary fireworks display.”

After an unprecedented three-year gap between performances, you can bet on interest in the 2022 Boston Pops Fireworks Spectacular being sky-high. Whether you’re heading out to see the show in person or watching them from your home, here’s what you need to know about the iconic Independence Day event.

What time does the 2022 Boston Pops Fireworks Spectacular start, and where will it be held?

The 2022 Boston Pops Fireworks Spectacular will return to the DCR Hatch Shell on the Esplanade in Boston after a three-year absence. The concert kicks off at 8 p.m., and the 30-minute fireworks show starts at 10:30 p.m.

Unlike previous years, the July 3 rehearsal will not be open to the public.

Also of note: In previous years, many pedestrians who didn’t want to brave the Esplanade crowds chose to view the fireworks from the Mass. Ave. bridge. In its lengthy list of road closures and parking restrictions, the BSO notes that viewing from both the Longfellow Bridge and Mass. Ave. bridge is not allowed.

Who is performing at the 2022 Boston Pops Fireworks Spectacular?

As mentioned above, 10-time Grammy winner Chaka Khan will headline the lengthy list of performers at the 2022 Boston Pops Spectacular. Also scheduled to perform are “The Voice” winner Javier Colon, Tony and Grammy winner Heather Headley, the Tanglewood Festival Chorus, the Middlesex County Volunteers Fifes & Drums, and the Honor Guard of the Massachusetts 54th Volunteer Regiment.

The evening’s lineup also includes a performance of the Ukrainian national anthem, which, according to a statement from Lockhart, “will be dedicated to the people of Ukraine and the courage and perseverance they have consistently shown in their struggle for their country’s continuing independence.”

Among the Boston Pops Orchestra’s selections will be a number of pieces performed in tribute to legendary composer Stephen Sondheim, who passed away in November 2021. The Pops will perform an orchestral arrangement of “Comedy Tonight” from “A Funny Thing Happened on the Way to the Forum,” and a Sondheim medley featuring “Our Time” from “Merrily We Roll Along” and “Children Will Listen” from “Into the Woods.”

The event will also include a tribute to the memory of Mugar. The late philanthropist’s support for the Fireworks Spectacular began in 1974, transforming a previously small show into a nationally-recognized Independence Day celebration with the addition of elements including a performance of Tchaikovsky’s 1812 Overture and a massive fireworks display over the Charles River.

What you can and can’t bring to the 2022 Boston Pops Fireworks Spectacular:

There, security personnel will ensure you are not bringing any of the following:

Bicycles will not be allowed through checkpoints in order to facilitate a timely evacuation in case of emergency. Bikes are allowed in other parts of the Esplanade, but must not be left unattended. Bikes locked to security fences, poles, or other structures may be subject to removal.

With all that out of the way, here are common items that will be allowed at the Fireworks Spectacular:

Parking and transportation details for the 2022 Boston Pops Fireworks Spectacular:

Due to the number of street closures and parking restrictions put into place on July 4, the BSO advises those able to utilize public transportation to do so. The two closest stops to the Hatch Shell are Charles-MGH on the Red Line and Arlington Street on the Green Line. While the MBTA has recently implemented a reduced schedule on most days due to staffing challenges, it will return to its normal weekday schedule on July 4 due to the expected ridership increase.

If you plan to drive to the 2022 Boston Pops Fireworks Spectacular, you can search for a number of garages near the Hatch Shell. If you’re looking for nearby options on Google Maps, the address to use for the Hatch Shell is 47 David G. Mugar Way, Boston, MA 02108.

One garage that the BSO highlights in particular on its website is the Motor Mart Garage at 201 Stuart Street, which is an easy walk to the Esplanade.

That said, drivers should be careful to note the extensive number of road closures, which begin as early as July 1 and grow in number on July 4. Most travel on the river roads (Storrow Drive and Memorial Drive) near the Hatch Shell will be significantly reduced or closed completely, and more than a dozen roads in Boston and Cambridge have restrictions on travel or parking. To see a full list, visit the BSO website.

How to watch the 2022 Boston Fireworks Spectacular on TV or listen streaming online, on the radio, or on your phone:

If you’re not attending the 2022 Boston Pops Spectacular, you can still catch the concert and fireworks display on TV or listen to the concert on the radio, on your smartphone, or online.

Pay TV customers in the greater Boston area can view the Boston Pops Fireworks Spectacular on the following channels:

You can listen to musical performances at at bloombergradio.com and on the Bloomberg Radio and iHeartRadio apps.

On the topic of audio, you can hear the concert through Bloomberg’s Boston and Newburyport stations at 106.1 FM, 1330 AM, 1450 AM, and 92.9-HD2. Plymouth’s 99.1 WPLM will also broadcast the event to listeners on the South Shore and Cape Cod and in southeastern Massachusetts and parts of Rhode Island. National listeners can find the concert on SiriusXM channel 119.

The best things to do around the city, delivered to your inbox.