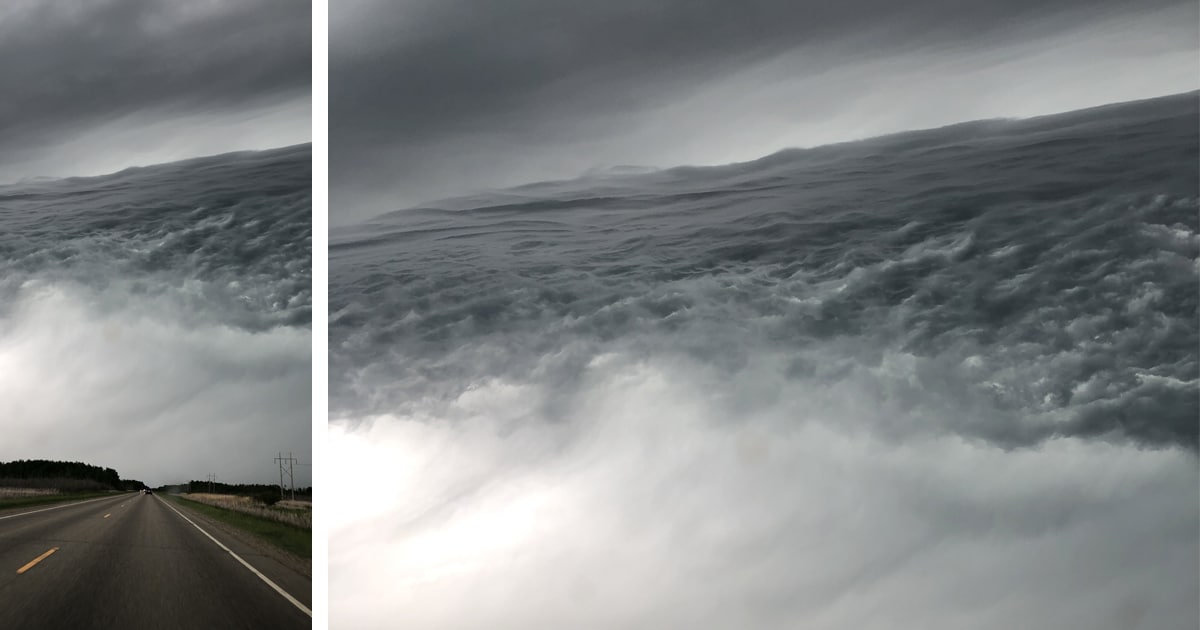 A seascape in the sky.

Did anyone else in the Northland take a picture of these roiling clouds? pic.twitter.com/WqUEMhwItd

We’ve seen some incredible storm clouds, but nothing quite like this. Theresa Lucas was driving toward the town of Bemidji in Minnesota when she snapped a photo to show her daughter how far away she was. Little could she have known that her quick picture would cause a sensation. That’s because she didn’t just record her location, but also some incredible storm clouds that create a mind-bending illusion.

The dramatic storm system actually looks like ocean waves crashing down into the sky. In fact, when first scrolling down, you may think that you are looking at a photo of the ocean, only to discover that there is a highway below. So what type of clouds are we looking at? It appears that they are a cloud formation called asperitus, which was actually only recognized by the World Meteorological Organization in 2017.

According to the International Cloud Atlas, asperitus clouds are “well-defined, wave-like structures in the underside of the cloud; more chaotic and with less horizontal organization than the variety undulatus. Asperitas is characterized by localized waves in the cloud base, either smooth or dappled with smaller features, sometimes descending into sharp points, as if viewing a roughened sea surface from below. Varying levels of illumination and thickness of the cloud can lead to dramatic visual effects.”

The photograph gained traction online when it was posted by local television station WCCO-TV on both Facebook and Twitter, where people couldn’t stop commenting about what they were seeing.

Perhaps, best of all, the photograph got everyone talking about how beautiful the sky is in Minnesota. People began posting their own cloud photos from the area, showing how they can appear as mountains, valleys, and much more. For Lucas, all the attention has been a pleasant surprise. What started out as a way to tell her daughter when she’d been home has turned into much more. She’s now entered the image into the Minnesota State Fair, where hopefully it will get the prize that it deserves.

Theresa Lucas was driving in Minnesota when she happened to take a photo of an incredible cloud formation.

Some people couldn’t get over how much the clouds looked like waves crashing down.

That is just CRAZY ! ! !
It looks like the road is just headed straight into the ocean !
That is a really COOL PICTURE !

This is such a crazy photo. When I was scrolling on my phone, I only saw the top half and thought it was Lake Superior.

Others shared their own incredible photos of Minnestoa’s cloud formations.

Stormy Clouds Roll Like Ocean Waves Across the Sky