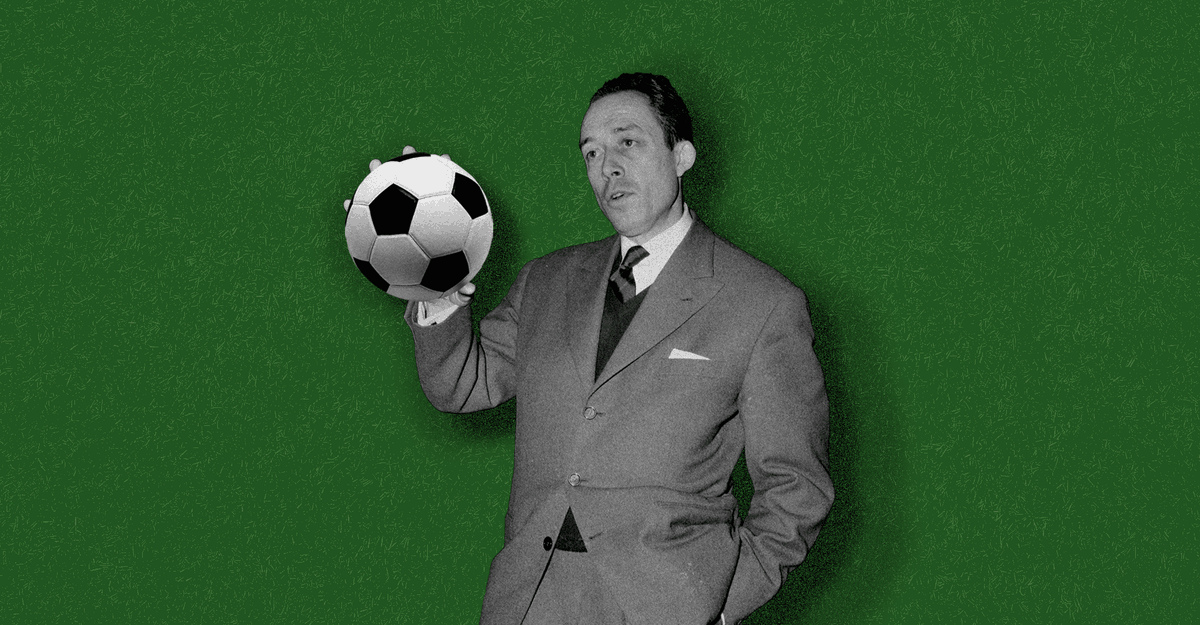 On a bright spring afternoon in Glasgow, the blood ran picturesquely down our goalkeeper’s neck. He’d accidentally snagged one of his earrings in the net and torn open his left earlobe. Really he should have gone straight to the hospital, but such was the level of commitment inspired by this football match—Scotland’s Writers versus England’s Writers—that he stayed standing tall between the sticks. We were on Astroturf in a sports complex, being watched by tens and tens of fans or, as they preferred to be known, family members. And though later in the evening both teams would gather together for good-natured readings of Gaelic and Ukrainian poetry and crime fiction and candid essays about our mental health, in this moment nothing mattered more than seeing each other lose.

The original idea of the Writers’ League—as conceived in 2005 by the Italian novelist Alessandro Baricco—was to prove that athletes could be intellectuals, and intellectuals athletes. We saw ourselves in a direct line from Albert Camus, who had been a semiprofessional goalkeeper for Racing Universitaire d’Alger. We even put his name on the front of our jerseys. But despite our intention to find a graceful unity between movement and thought, we soon came up against the problem of our bodies. We consistently got beaten or injured, often both. During one defeat, our spindly left-winger—the Oxford professor Marcus du Sautoy—had his writing hand broken by an enormous German author of plays for children. Was it possible that we were, in fact, just confirming negative stereotypes? And now that we reflected on it, even Camus, our mascot, started reading philosophy only because he contracted tuberculosis—which meant that he could never play football again.

Read: The ugly truth about the beautiful game

There was another purpose to the Writers’ League, though. Baricco also saw it as an opportunity to create friendships among writers from different countries—and, in that sense, it worked. There are now writers’ football teams from Austria, Denmark, England, Germany, Hungary, Israel, Italy, Northern Cyprus, Norway, Scotland, Sweden, Switzerland, and Turkey. (I should confirm that by football I mean soccer and not American football—much as I would like to see groups of literary novelists slamming against each other in shoulder pads.) Every few years, a handful of teams come together for a World Cup. In what may turn out to be a highlight of my career, I once helped defeat a Norwegian team that included a novelist-defender called Karl Ove Knausgård who, at that time, was known to us only for his powerful headers. At the most recent World Cup in Northern Cyprus, the injury, exhaustion, and sunstroke rates were so high that, after two days, most countries were unable to field a full squad and so the organizers arranged a friendly—The World versus The World—that joined in international cooperation all the players who could still walk.

It was with this kind of diplomacy in mind that the writers’ teams from England and Scotland established our semiannual fixture. We hoped to be an antidote to the national game, with its history of spitefulness and thuggery, of drunk fans booing one another’s anthems. But if writers’ football has taught me anything, it’s that writers should never be relied on for moral guidance. The night before our most recent match in Glasgow, we were welcomed to the city by one of the Scottish players, Simon Weir, a screenwriter and an actor specializing in gangsters, psychos, and hooligans. (He’s been in two film adaptations of Irvine Welsh novels.) He’s tall, broad, and baldish, and the first thing he said to us—with an unreadable amount of irony—was: “We’re gonna give youse a pastin’.” That evening in the pub, he repeated it again and again. It was hard to know if this was just theater or if it went deeper than that. But he was still saying it the next morning when we gathered in an echoey changing room on Glasgow Green, the smell of Deep Heat rising from our kit bags. His actor’s voice boomed impressively off the tiles: “We’re gonna give youse a pastin’.”

Then, as we ran onto the field, an 8-year-old girl who had been practicing free kicks on a nearby pitch spotted our England jerseys and immediately turned to us and belted out “Flower of Scotland” with frightening intensity. This is the folk song that recounts the famous day in 1314, the Battle of Bannockburn, when Robert the Bruce and his men defeated Edward II of England and “sent him homeward tae think again.” The message was clear: No match between Scotland and England—not even one played by writers—is immune to history.

As our two teams faced off, the battle that came to my mind was not Bannockburn but its contemporary analogue: Brexit. In 2016, England voted for it and Scotland against it. England won. And because Scotland has now been dragged unwillingly out of the European Union, the Scottish National Party has promised a new referendum on Scottish independence. In my lifetime, at least, our two countries had never felt more estranged. And it was with these tensions hanging in the air that the referee blew his whistle and we charged toward each other.

Within a few minutes I realized—with a sense of relief—that it would be difficult to even describe a game of this quality, let alone attribute sociopolitical meaning to it. A 58-year-old English central defender and author of witty books about dog grooming tore his hamstring and had to be helped off the field—and what did this signify? And what was the true message behind Doug Johnstone—noted Scottish crime writer whose previous career was in military ballistics—repelling my diving header with his knees? And when Scotland took the lead, how should we interpret the fact that the goal was scored by a short-story writer known to actively avoid all publicity and social media and who asked that I not include his name in this article? The match ended 1–1, a draw, which I appreciated for its ambiguity. But I was in a clear minority. It was agreed that we needed an outright winner and, perhaps more important, an outright loser.

This is what led us to the penalty shoot-out, during which Tomasz Mortimer, our English Hungarian goalkeeper-journalist, tore out his earring while retrieving the ball from the net. Despite his injury, he still volunteered to be our final penalty taker. We had the idea that the impressive bloodstain on his shirt would give him a psychological edge against Andrew Blair, the Scottish goalkeeper-poet.

We watched Tomasz step back and breathe, his shoulders rising and falling. The big question was whether pride in his nation would help him rise above his injury, if the wider historical and political significance of this game would allow him to transcend the merely physical. He stepped forward and kicked the ball both gently and at an appealingly saveable height. As he later told me, it went badly because he was “not thinking about much apart from my ear.” Andrew palmed the ball away and was immediately swamped by his fellow countrymen, who roared and lifted him aloft, laughing and chanting “Easy! Easy!”

The Scots had taken their vengeance. They had crushed us, the Auld Enemy. And for the next three to four minutes, they would never let us forget it. But then the chanting died down. Andrew admitted that he had felt a bit strange about celebrating their victory, on account of his mother being English. I agreed that I didn’t feel as sad as I should have, on account that mine was Scottish—and also I was Welsh. Then members of both teams took to their hands and knees in the fading light, and scoured the artificial grass for Tomasz’s lost earring.