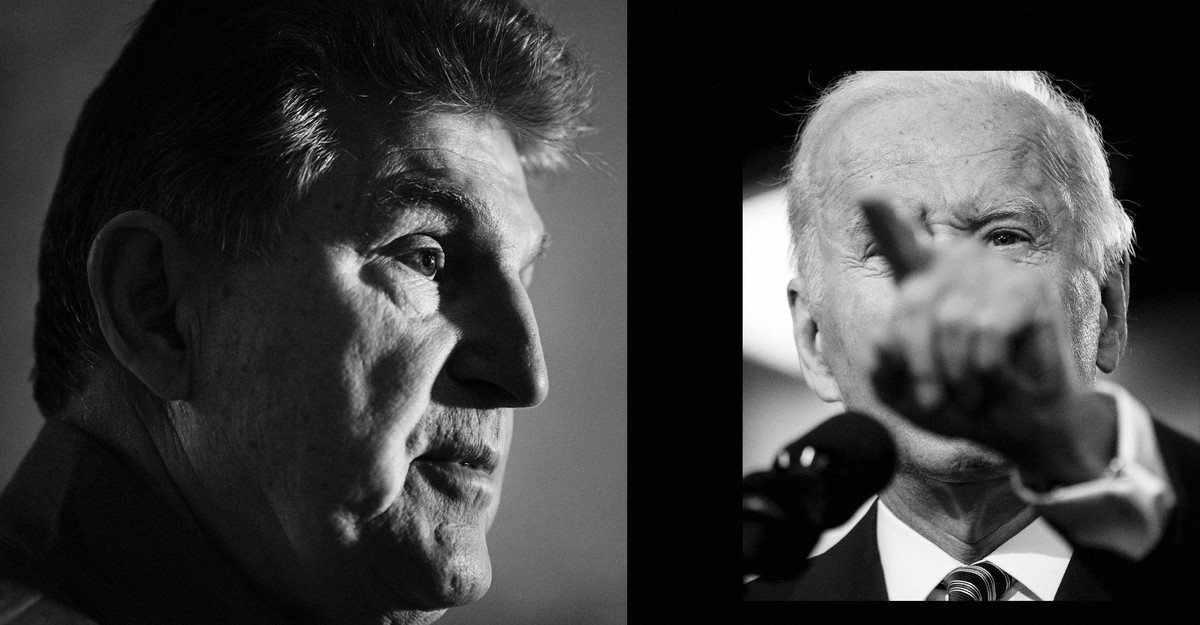 Tonight, at his State of the Union address, Joe Biden plans to pivot to deficit reduction. The move seems designed to persuade just one guy—Senator Joe Manchin of West Virginia—to sign on to parts of the president’s Build Back Better proposal.

This new emphasis might give wonks and Hill staffers flashbacks. Not so long ago, a new progressive president, struggling to hold his coalition together, pivoted to austerity soon after a once-in-a-generation recession, and mired working families in a lost half decade.

Annie Lowrey: Good luck convincing anyone that the economy is strong

Thankfully, the economic situation is far different now than it was a decade ago. Congress has provided ample stimulus to combat the coronavirus recession; economists seem to have a better grip on how much the country can borrow; and Democrats are focusing on revenue increases, not indiscriminate spending cuts. The Biden administration might not be able to do much to tamp down inflation, as Manchin wants. But it has plenty of options for sopping up some red ink without putting families at undue risk.

A year ago, Biden asked Congress to “build back better,” pushing for a new New Deal and positing Big, Big Government as the urgent solution to any number of societal problems, from the high cost of child care to the climate crisis. His proposed social-policy legislation ended up containing a number of provisions intended to ensure that it did not add to the country’s deficits. Democrats suggested bumping up IRS enforcement, closing tax loopholes, and making several of the bill’s spending provisions—including funding for universal pre-K and subsidies for private-insurance coverage—temporary.

If the bill’s social spending had become permanent, it would have added to the debt, absent other changes. That fact, along with concerns about the bill’s complexity, the economy overheating, and changes to energy policy, led Manchin to pull his support. (Much of the legislation’s infrastructure spending passed in a separate bill, with bipartisan votes.) “We’re not going in the right direction with our debt, with inflation, with any of our monetary policy,” Manchin told reporters last month. “The most important thing we have to deal with is our fiscal responsibilities.”

Read: What Joe Manchin’s ‘no’ means for Biden’s agenda

Biden seems to have gotten the message. This time, it seems likely that Democrats will ask for more money for kids and seniors, but also more money for Uncle Sam, with a slimmer set of proposals (Build Back a Bit, I guess). Biden does not seem to be suggesting—nor is anyone in Washington demanding—Obama-era austerity, whereby Democrats contemplated slashing Social Security and means-testing Medicare, and forged deals with Republicans that cut spending on an array of federal programs by 5 to 8 percent.

This kinder, gentler form of deficit reduction is less likely to choke off economic expansion than the Obama-era cuts were. Already, the recovery from the coronavirus recession has been far stronger, far broader-based, and far faster than the recovery from the Great Recession, thanks to the trillions and trillions of dollars that Congress spent on stimulus checks, small-business support, cash for parents, and an expansion of the unemployment-insurance system. Plus, economists are far less worried about the country’s debt load.

If Congress were to start to reduce the country’s deficits, which are already falling on their own, progressive tax increases would be a safe way to do so. Tax cuts for the 1 percent do not do much to amplify growth, as we found out during the George W. Bush and Donald Trump administrations. But taking them away would not do too much to slow it either.

Inflation is a thornier issue. The Fed is expected to raise interest rates, perhaps sharply, this year, to cool off the economy and hold down prices. Biden has a series of supply-side proposals that he argues will bring down the cost of energy, child care, and transportation, as well as prescription-drug prices. Maybe, but perhaps not quickly. Rising inflation is in part due to factors largely outside the administration’s control, such as coronavirus-related supply-chain issues. But Manchin wants inflation and the debt to be the focus, and for now, Biden seems to be taking the senator’s view of the state of the union as his own.