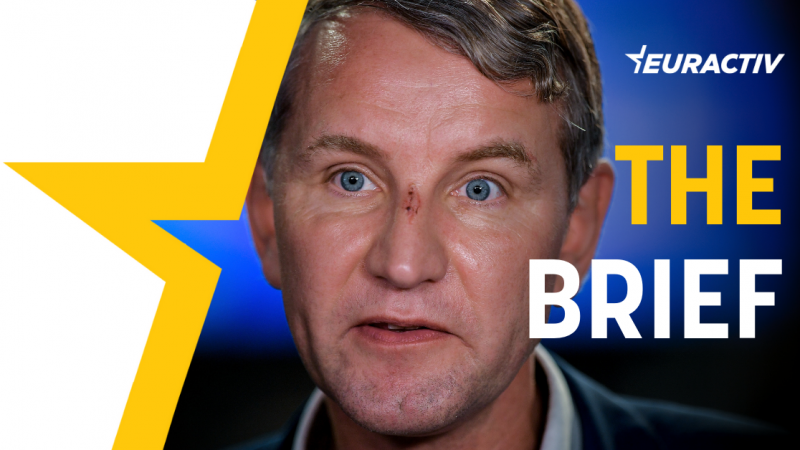 While Marine Le Pen managed a record result in France’s parliamentary elections with her “wolf in sheep’s clothing” approach, Germany’s far-right Alternative for Germany (AfD) has been tearing itself apart over the question of how unapologetically extremist it should be.

“I request an end to this party convention – this is undignified, and we are dismantling ourselves here!”

Shortly after one of the AfD delegates shouted these words on Sunday, the party congress originally meant to showcase unity abruptly broke up.

Most delegates voted in favour of pulling the emergency brake on the convention after Björn Höcke tabled a motion in which he consistently called Russia’s invasion of Ukraine a “conflict” and called for the EU to be dismantled in favour of a union that should orient itself more towards Russia.

After more than two hours of back and forth, the motion was finally taken off the agenda, and the convention terminated.

Even though Sunday’s fight ignited over particular issues, it is a symptom of a deep split between the party’s wings, which we might dub the “wolf” camp and the “sheep” camp.

The “wolves,” led by Höcke, call for the AfD to show its teeth and be unabatedly, blatantly extremist, or even fascist.

Höcke, a history teacher by profession, known for downplaying the Holocaust and who, according to a court ruling, can legally be called a fascist, is the AfD leader in Eastern Germany’s Thuringia and the most influential figure of the party’s extreme right-wing

Politically, the wolves are located at the rightmost border of what is still constitutional or even beyond.

Geographically, they are located primarily in Eastern Germany, where voters are disappointed by elites, feel left behind, and are hungry for the self-esteem a feeling of ethnic or national superiority can give them.

Here, several state divisions of the party are officially under supervision from Germany’s secret service, which classes them as “extreme right”.

Meanwhile, the more moderate party wing wants to keep up a respectable, socially acceptable outward image – to wrap the wolf in sheep’s clothing.

This “sheep” faction knows that their voters, usually in Western Germany, have an appetite for some thinly veiled xenophobia and hardcore conservatism but will mostly draw the line at things like Holocaust denial and anti-vax propaganda or, in this case, unmediated pro-Russianism.

Most importantly, these voters want to save face. They want to keep up the illusion that they are not actually far-right but just conservative. Therefore, they will not support motions like Höcke’s, specifically meant to cause an uproar.

Despite this weekend’s clash, the party convention clearly showed that Höcke and his “wolves” are climbing to the top in the AfD.

In several critical internal votes, more moderate voices, including the party leadership, significantly lost ground, and it became clear that, in the background, Höcke was successfully organising majorities for his camp among the delegates.

Of course, this turn towards blatant right-wing extremism is very worrying, especially considering Germany’s past. At the same time, however – at the risk of jinxing it – this development might well contribute to the party’s downfall.

Two arguments point in this direction. Firstly, the party has already started seeing election slumps in several regional votes during the past months, sometimes barely making it into parliament.

Secondly, the success of Marine Le Pen’s far-right Rassemblement National in France’s recent presidential and parliamentary elections, which came after she toned down much of her xenophobic and anti-EU rhetoric, shows that sugarcoating right-wing politics seems to work well.

Therefore, let us hope that the AfD’s turn to full-on, wolfish extremism means it will bite itself in the tail.

Today’s edition is powered by NESTE.

We need to reduce transport emissions and we need to reduce the amount of waste that cannot be recycled. What if each of these problems was actually the solution to the other? We call it Waste-to-Wheels.

Serbian President Aleksander Vučić has said that he and his Albanian and North Macedonian counterparts will announce on Wednesday (22 June) whether they will take part in the upcoming EU summit on 23 to 24 June.

Czechia wants to make climate and the environment the drivers of its EU Council presidency starting 1 July, with emphasis on energy security and breaking the EU’s dependence on Russian fossil fuels.

Slovenia has urged member states to send a strong political signal to the Western Balkans, while EU leaders are likely to fall short of firm commitments at the 23 and 24 June summit.

A radical change, particularly in public policy, is needed to address climate change and the social inequalities it comes with, former green minister and current director of Oxfam France Cécile Duflot told EURACTIV France in an exclusive interview.

Lithuania has partly closed rail transit of Russian goods to and from its exclave of Kaliningrad, saying it was enacting EU sanctions, angering Moscow and igniting fears over the so-called Suwałki Gap.

Meanwhile, as one of 100 European cities that pledged to be climate neutral by 2030, Sønderborg, Denmark is a living example of a possible future for decarbonised towns.

In other news, five young people who count themselves as victims of climate change filed lawsuits on Tuesday against European states for letting the Energy Charter Treaty (ECT) delay the green transition.

Last but not least, check out our Transport Brief.