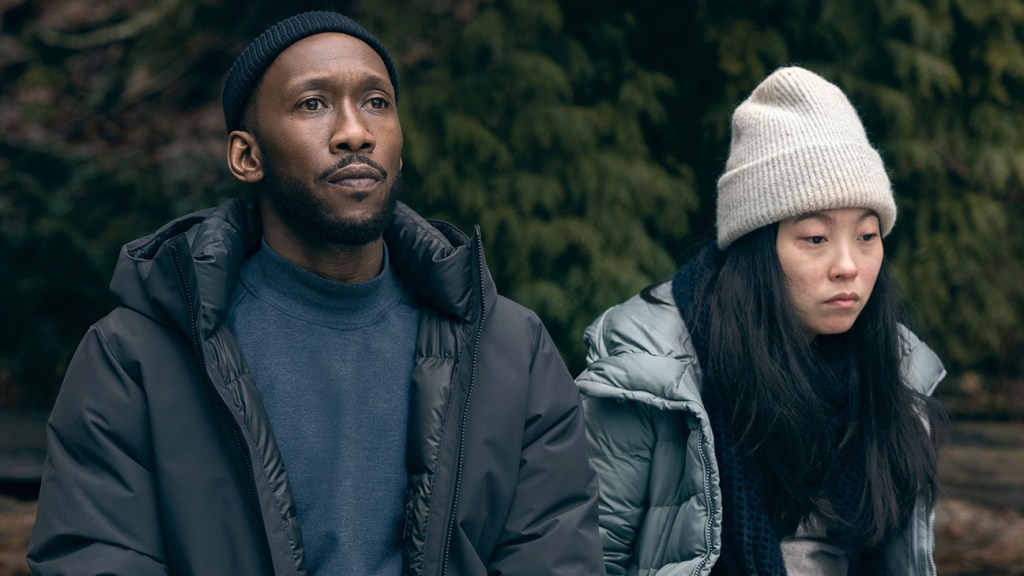 There’s been no shortage of near-future sci-fi that bucks the trend of technological menace to explore instead the high-concept ways that scientific advancement can fill an emotional void in human lives. Spike Jonze’s Her and Michael Almereyda’s Marjorie Prime are superior examples; this year has seen two fine entries in Maria Schrader’s I’m Your Man and Kogonada’s After Yang. Irish writer-director Benjamin Cleary, who won a 2016 Oscar for his short film Stutterer, mines that territory with his first feature, a soulful drama acted with great sensitivity by a strong cast, which unfolds to considerable atmospheric effect in the soft, somber light of the Pacific Northwest.

Despite all that, Swan Song becomes increasingly earnest and dull, spending such an inordinate amount of time lingering over tearfully contemplative gazes that it’s too maudlin to exert much of a genuine pull on the heartstrings. That’s no fault of Mahershala Ali, who digs deep in a dual-role performance as advertising artist Cameron, whose health is rapidly declining from a terminal illness, and — spoiler alert — the molecularly regenerated duplicate created in a lab to take his place and spare his family from grief.

The fact that no one in Cameron’s family is in on the plan and even the clone himself — named Jack in the fine-tuning phase — will have all knowledge of the switch erased from his memory makes the literally life-changing experience an uncommonly solitary one. Ali is too fine an actor not to bring rich shadings — lacerating sorrow, surges of anger, battered dignity — to the painful process of letting go, surrendering his loved ones to a stranger as he waits to die. But the movie’s hushed intensity is too one-note, and Cameron’s agony too protracted to be affecting.

Cameron and his future wife, Poppy (Naomie Harris), are first seen meeting cute over a chocolate bar purchased from an AI commuter train snack vendor. The action then jumps ahead seamlessly to find them a few years into their marriage, with a sweet young son (Dax Rey) and another baby on the way. Cameron has kept his headaches and seizures from Poppy, mindful of the fact that she has barely emerged from the crushing depression that followed the death of her adored twin brother, Andre (Nyashi Hatendi), in a motorcycle accident.

But Cameron has been quietly consulting with Dr. Scott (Glenn Close), who works with a small team of human and android collaborators at a luxuriously minimalist lab facility deep in the forest that doubles as a hospice for clients to live out their final days. Cameron is only the third person to participate in the still-experimental procedure. In an attempt to quell his anxieties, Dr. Scott allows him to meet a successful predecessor, real estate broker Kate (Awkwafina). He first encounters her blissfully unaware duplicate and then the troubled biological original, slowly fading away at Dr. Scott’s compound.

Of course the real test comes when Cameron meets Jack, distinguishable only by a tiny freckle on one hand. Once his memories are transferred, going all the way back to birth and probing even into Cameron’s subconscious, Jack is awakened and Cameron becomes threatened by the idea of this creation being absorbed into his wife and son’s lives. There are moments of tension as he attempts to pull out of the contract, and the entire plan is almost upended when Cameron insists on a final visit that coincides with a health crisis. But the melancholy melodrama proceeds with an increasingly heavy tread toward an inevitable conclusion, and the philosophical and ethical questions raised by Cameron’s solo decision are left hanging.

Part of the issue with Cleary’s script and direction is the saccharine lengths to which he goes to establish Cameron’s family as a perfect unit. Sure, Poppy shut down emotionally after losing her brother, and Cameron has been a tad distant while privately coping with his illness. But husband, wife and son are constantly beaming at each other with such beatific rapture that they become a bit tiresome. We get it, the stakes are high for Cameron. But they’re more like a family in a syrupy TV commercial than interesting three-dimensional dramatic characters. Poppy teaches music therapy to kids with learning disabilities, so she’s practically a saint.

That said, the luminous Harris brings appealing naturalness to the role, while Close and Awkwafina invest their characters with integrity and gentle humor, respectively. The film is certainly a classy endeavor. Some of the vocal tracks layered in feel intrusive, but Jay Wadley’s melodic score is lovely, and Masanobu Takayanagi’s cinematography captures the serenity of the woodsy landscapes, in contrast to the personal turmoil being processed there. The depiction of the future has some nifty touches, like the driverless electric car in which Cameron travels back and forth from Dr. Scott’s, and the device-free digital technology at everyone’s fingertips. It’s just too bad that all the cool science gives way to sudsy sentiment.