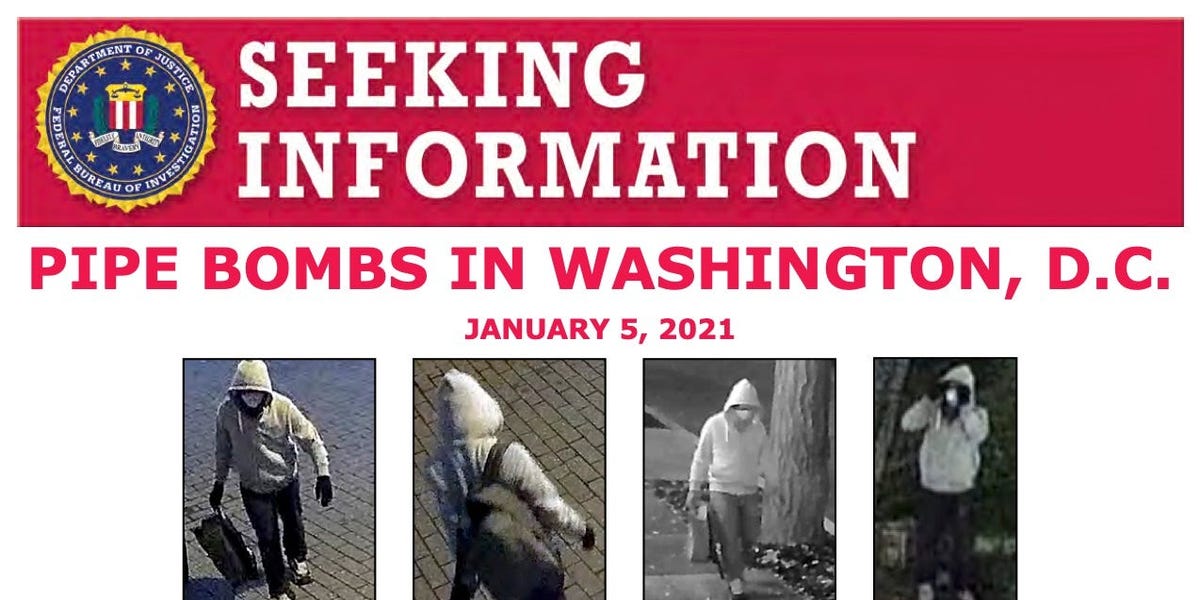 In the year since the January 6 insurrection, over 700 defendants have been prosecuted for breaching the US Capitol as part of a violent attempt to halt Congress from affirming the results of the 2020 election.

A year later, no one has been arrested for placing the bombs. In March, the FBI released security camera footage that captured the suspect walking to and from the DNC and RNC.

The suspect was seen walking down South Capitol Street while carrying a backpack believed to contain the bombs at 7:40 p.m., sitting on a bench outside the DNC at 7:52 p.m., carrying the backpack down an alley between the RNC and the Capitol Hill Club at 8:14 p.m., and then finally exiting the alley to First Street SE. At one point in the clip, the suspect can be seen waving to a passing police car.

The suspect was wearing dark-colored pants, a gray hoodie, and a white face mask. The FBI said the suspect’s shoes were identified as gray Nike Air Max Speed Turf sneakers, with the Nike logo in yellow.

The Bureau additionally released close-up photos of the suspect’s clothing, shoes, and the bombs, asking Americans to look closely at the items and the video clips to see if they notice familiar “gait, body language, or mannerisms.”

The FBI released additional footage in September 2021 showing the suspect walking up to and sitting on a park bench after they are believed to have placed the bombs.

Capitol Hill resident Karlin Younger discovered the bomb left outside the RNC on the afternoon of January 6. She previously told Insider that at first glance, she believed that the bomb was a piece of recycling — until she saw caps on each end and the timers.

“You don’t think you’re under attack,” Younger said of living in her neighborhood. “I’m not in Iraq. This is Capitol Hill. And I just see this, and it was the fact it was capped on both ends that made me start to worry that this wasn’t just a part from a car or a bike or something, and it was that timer that really got me to be like, ‘Wait a minute.'”

Younger told Insider that she ran first to the Capitol Hill Club and then to the RNC, where she was able to flag down a security guard.

Younger said that law enforcement quickly descended on the scene, and evacuated her apartment building. Her discovery led law enforcement to discover another pipe bomb left outside the DNC, and she later spoke to the FBI about it.

The FBI and the Bureau of Alcohol, Tobacco, and Firearms are still offering a $100,000 reward for information leading to the arrest of the suspect.