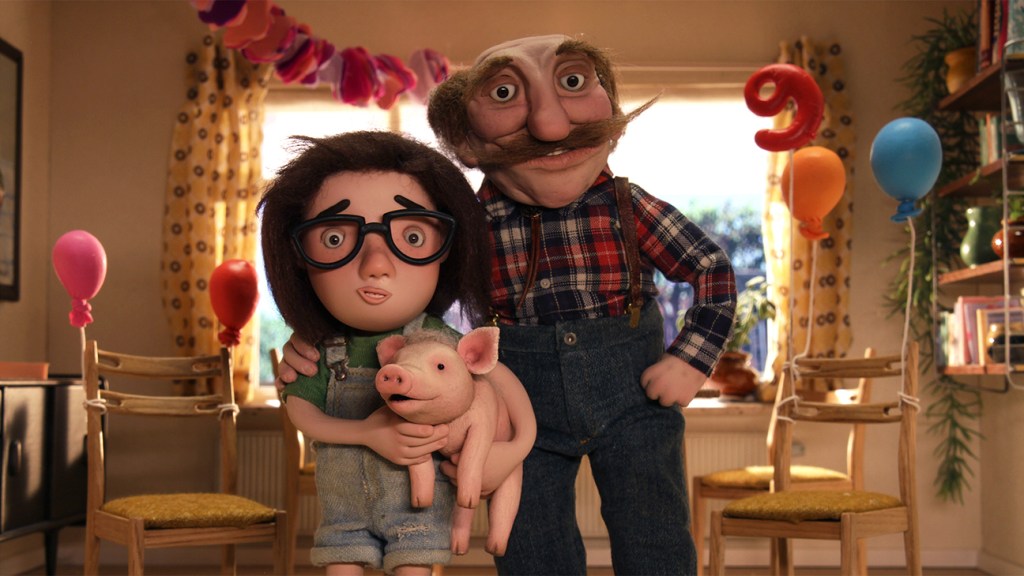 Premiering at the Berlinale in 2020, Viktor Kossakovsky’s black-and-white documentary Gunda — following a mother pig and her adorable newborn piglets on a Norwegian farm — probably did more damage to the pork industry (Big Pork?) than any other film since Babe. Just two years on, however, and Berlin — perhaps the most unlikely festival on the circuit — seems once again determined to push anti-sausage sentiment.

Opening the kid-focused Generation Kplus competition this year is Oink, a Dutch stop-motion animation film likely to encourage a generation of young viewers to stay firmly away from Germany’s most famous dish.

“I’m honestly not a vegetarian myself,” admits director Mascha Halberstad, whose feature debut (entitled Knor in Dutch) follows Babs, a nine-year-old meat-hating girl given a piglet by her grandfather, a former master butcher and disgraced contestant of a local “King Sausage” contest whom she believes has put his “wurst” years behind him (spoiler alert: he hasn’t). Raising the little pig like a puppy (even taking it to dog obedience classes), she eventually discovers the dastardly — and some might suggest delicious — plans in store for her new pet.

Having directed various animated short films and even the video for The Prodigy’s track “Wild Frontier,” it was following the festival success of her 2013 short Munya in Me that Halberstad was urged to make the leap to features (not an inconsiderable one given the time stop-motion animation takes). So, inspired by a love of Roald Dahl (particularly his book The Twits) she went into a children’s bookshop near her home in Arnhem in East Holland and said “I want to make a feature film, but it has to be a Roald Dahl kind of book.” Of the four she was given, Oink’s Revenge, written by Tosca Menten, immediately stood out.

Two years in the making, Oink — much like Dahl’s stories — is awash in color, with outlandish characters sporting quirky outfits and offbeat hairdos (the sausage-loving grandpa has a particular impressive mustache), and exists in an utterly charming small town world inspired by the Holland Halberstad grew up in.

Having made Munya in Me in her home studio (funnily enough in an old butcher’s shop), for this, much-larger, project requiring numerous sets she teamed with her producer and business partner Marleen Slot to buy an old garage 500 meters away. “It was really crappy, but we completely transformed it into a 600 square meter studio,” she says. “But we did this also while starting the production, so that was pretty crazy.”

While Oink is clearly aimed at children, there are plenty of elements for grown-ups to enjoy, some subtle, some less so. Among the less subtle additions: pig poo. Oink the pink defecates, somewhat spectacularly, in Babs’ living room, down a slide, pretty much everywhere. Pig poo even plays a central role in several of the film’s climactic scenes.

Halberstad readily admits that there may be “too much poop” for the palettes of some kids film or TV producers, but says her and Slot made the decision that they weren’t going to “make any concessions and would just do what we wanted to do — if it’s not going to be commercial, we don’t care!”

Creating the poop required some careful thought, with the substance needing to fix to surfaces. Eventually, Halberstad and her team settled on a type of sticky silicon, with her keen to note that no poop — or anything for that matter — was added in post-production. “It was important that everything was done on camera — I didn’t want to use green screen,” she explains.

Sadly, for anyone hoping that the King Sausage contest was real and had already begun planning holidays in Arnhem, Halberstad points out that it’s actually a work of fiction. However, she’s using the competition for a short prequel to Oink, due to go into production soon, that will tell the love story of Babs’ parents, dating back to the very first King Sausage contest 25 years earlier.

“The whole world is just so nice to work with,” she says of returning to her miniature sets. “And we’re also trying to develop a series just with the pig.”

As for her favorite Dahl book, The Twits, Halberstad accepts that the rights have been scooped up by Netflix when it bought the Roald Dahl Story Company last year. But she’s not giving up hope. “I’m writing a job application!” she says.