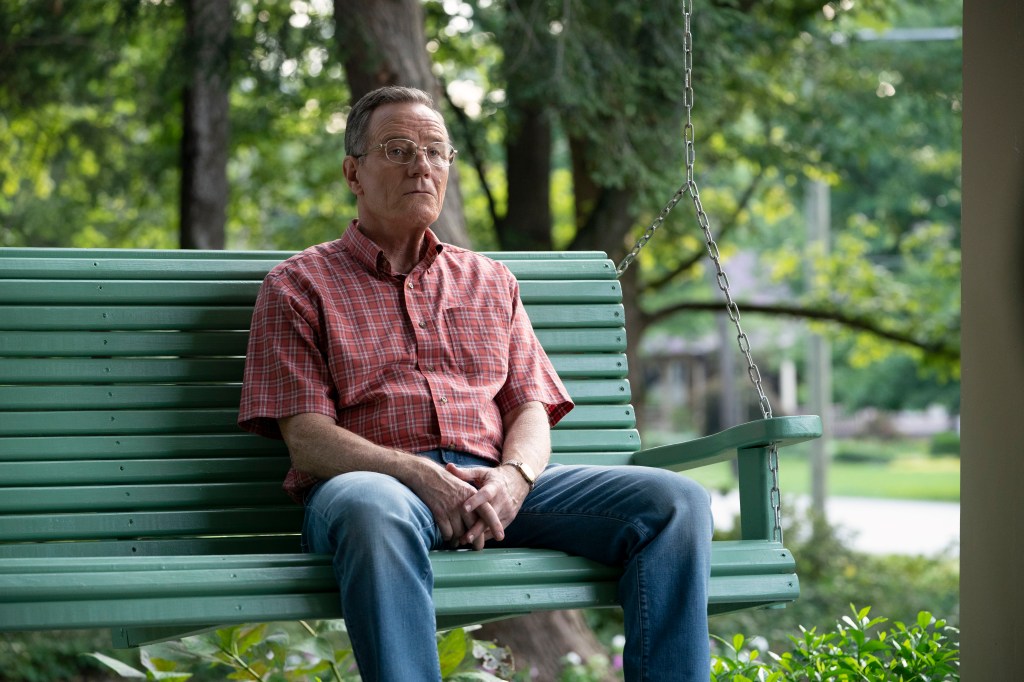 Bryan Cranston teams with Annette Bening for the true-life adventure “Jerry & Marge Go Large,” the inspiring story of a retired Michigan couple who over the course of 9 years beat the Massachusetts Lottery Winfall to win $27 million.  It’s an incredible story that might have been scripted by Frank Capra during the Depression but it really happened due to a mathematical error that Jerry Selbee, a retired accountant, immediately recognized.  The Tony and Emmy winning Cranston, in an interview with The Boston Herald, spoke of how, coming out of COVID, he wanted to make something light and inspiring.  These are excerpts from that conversation:

Q: IMDb has you in 2 movies coming up, one directed by Matthew Vaughn, the other Wes Anderson. Both are famous auteurs. What is the thing that you look for before you say yes to something? Is it the film director? The character?

BRYAN CRANSTON: I have a formula for determining whether or not I should do a role. First and foremost is always the story. What’s the story? Did the story resonate with me? Was it important? Did it move me? Those are the factors because I trust that if I feel moved, if I feel something is important, then I trust that an audience will too. That’s the leap of faith you take.
From there I go to the character.  Is this a character that is new to me or is this a derivation of something I’ve already done? Am I challenged by that? Am I a little afraid of it (which is a good sign)? Do I have to learn a new skill (which is also a good sign)? You know, is it going to keep you out of a comfort zone? Because a comfort zone for an actor could push you into laziness.
Then I go to the director. Do the director and I have the same approach for this. What about the tone? Is it slapstick? Is it farcical? Is it straight down the chute? It’s all those things.

Q: Are Jerry and Marge alive?

BC: They’re still alive and well. I went with Annette Bening a year ago to Michigan and visited with them. They’re very much alive and healthy.

BC: I actually slipped a little bit. Jerry himself is gregarious, outgoing and talkative. He’s a very sociable guy. Marge is quieter and more observant. A lovely woman but she doesn’t talk a lot. It’s more of the behind the scenes kind of thing. So I talked about it with Annette. I just felt that if I made Jerry, because he’s a mathematician, a brain, made him a little quieter and have all the characters around him be more loquacious and fun. And this [notion of having fun] is something that he learns over the course of our version of this story. He learns more about people and socializing and opening up and being connected. That sort of thing. So it’s not just himself with his mechanical pencil on a piece of paper.

Q:  You have the very smarmy unctuous villains — this brainy Harvard brat and his condescending minions. Is he a straw dog put in the movie for dramatic purposes? Were these students really as creepy and horrible as we see?

BC: No. There wasn’t really a villain in it. For some reason they changed it. It was a group of MIT students. I’m not sure if MIT said, ‘Please don’t use us’ or what. But there was a group of students who figured it out and were playing as well.

Q: I was wondering if you’ve ever thought in terms of Walter White [from ‘Breaking Bad’], of taking that character and reviving him as a personal venture for yourself with a stage version that you could do on and off for years?

BC: No! That’s never crossed my mind. That’s a curious thought. But no, I don’t have an interest in doing that. There’s so many other things that come up that I’d like to take advantage of. I’m not as interested in reviving something [I’ve already done].

Q: Do you have maybe a wish list of something that you’d like to revive? A play or a musical from 30 or 40 years ago?

BC: Yes, there is a specific musical that I want to do. I can’t reveal the name of it right now because there’s a rights issue and options and all that sort of thing. But yes, there is something specifically that I want to do — and I might be able to do that within the next two or three years.

LARRY DAVID’S 11                                       ‘Curb Your Enthusiasm: The Complete Eleventh Season’ (DVD, HBO, Not Rated) returned after a one year pandemic break with a convoluted tale of blackmail, casting, Netflix and lawbreaking that begins when a burglar flees Larry David’s house, trips, hits his head and drowns in the swimming pool.  Problem?  Pools are to be surrounded by a safety fence which this is not. How this leads to Netflix and a miserable casting choice is what makes ‘Curb’ so addictively funny.  Along with the regulars (Jeff Garlin, Susie Essman, Cheryl Hines, JB Smoove, Tracey Ullman  is here. Season 12 is promised.

MIGHTY & AMONG THE GREATEST                            David Lean’s 1962 epic ‘Lawrence of Arabia’ (4K Ultra HD + Blu-ray + Digital, Limited Edition SteelBook, Sony, PG) is truly the kind of movie no one makes anymore.  Lean, who began as an editor before becoming a heralded filmmaker (‘Great Expectations,’ ‘Summertime,’ ‘The Bridge on the River Kwai’), spent literally years in the desert filming.  Albert Finney, his first choice, abandoned the role after 2 days, reportedly because he wasn’t ready to commit to two years in the desert filming.  Peter O’Toole as Lawrence and Omar Sharif as Sherif Ali became stars. ‘Lawrence’ won 7 Oscars including Best Picture and Best Director and today is considered one of the most influential films ever made.  Special Features with this 60th anniversary edition:  Making of from the ’63 and ’70 version, an unused international prologue, O’Toole revisits ‘Lawrence,’ a conversation with Steven Spielberg, a deleted balcony scene, Martin Scorsese on the film. There is also ‘Lawrence at 50 – a classic restored,’ Directors William Friedkin, Spielberg and Sydney Pollack in archival interviews on ‘Lawrence.’

A LEGEND’S FIRST                                     As an obsessive Stanley Kubrick would not be pleased that his feature directing debut now has the chance to be widely seen. Well-known as a perfectionist, the celebrated filmmaker of ‘2001,’ ‘Dr. Strangelove’ and the classic crime caper ‘The Killing,’ made what is now known as ‘Stanley Kubrick’s Killer’s Kiss’ (4K Ultra HD, KL Studio Classics, Not Rated) on a no-bones budget while acting as co-writer, co-producer, cinematographer, editor and director. It’s a nasty noir with a celebrated boxing match. This new 67-minute version is spectacularly restored in a brand new Dolby Vision HDR Master from a 4K scan of the original camera negative.  Bonus: Film historian Imogen Sara Smith’s audio commentary.

HOLOCAUST ARTIST                            A remarkable story that serves as both introduction and biography of German artist Charlotte Salomon, ‘Charlotte’ (Blu-ray, GDE, Not Rated) tells its story in mostly pastel animation.  Kiera Knightley voices Charlotte, a painter who because she was Jewish was persecuted, arrested and murdered at Auschwitz the day she arrived at the notorious death camp. She was 5 months pregnant and had just completed her masterpiece.  Bonus: Deleted and behind the scenes.

POPCORN ANYONE?                              What happens if you make a major popcorn movie, as happened with ‘Michael Bay’s Ambulance’ (Blu-ray + DVD + Digital Code, Universal, R), and the popcorn crowd stayed home?  This elaborate, big-budget thriller practically defines Bay’s trademark excesses and there is nothing wrong with the first-rate cast led by Jake Gyllenhaal.  Bonus: “Pedal to the Metal,’ ‘Chase Capital of the World,’ ‘Bayhen’ and ‘A Tribute to First Responders.’

EFRON DOWN UNDER                                Zac Efron’s in a helluva mess in the Australian-made ‘Gold’ (Blu-ray, Screen Media, R).  With his partner, Efron has discovered a mighty chunk of gold. They hatch a plan, Efron will stay, the other go fetch excavation tools.  But what if his buddy never returns? He faces ravenous dogs, brutal weather, mysterious intruders – and his own increasing paranoia. Co-star Anthony Hayes co-wrote the screenplay.

TWO FU MANCHU        Today, Fu Manchu is considered a racist stereotype but from his introduction by English author Sax Rohmer in 1913, the ‘supervillain’ has been featured in novels, movies, television, comic strips and comic books as the archetype of the mad scientist or criminal mastermind.  This Double Feature: ‘The Mysterious Dr. Fu Manchu’ and ‘The Return of Dr. Fu Manchu’ (Blu-ray, KL Studio Classics, Not Rated) offers Fu Manchu’s 1929 talkie debut with a surprising co-star, future iconic Frank Capra leading lady Jean Arthur (‘Mr. Deeds Goes to Town,’ ‘Mr. Smith Goes to Washington,’ ‘You Can’t Take It With You’) who was then a Paramount contract player. Warner Oland, a Swede, played not only the Asian Fu Manchu, he was the Chinese warlord opposite Marlene Dietrich in ‘Shanghai Express’ and, in 16 films, the very wise Holmesian-style detective Charlie Chan.  ‘Return of Fu Manchu’ in 1930 is a sequel that continues the story of its predecessor, again with Arthur. This remarkably enough is the first-ever time these films have not just been released on DVD, they were so rare that there have been decades-long gaps when no one had seen them. Bonus: Film critic Tim Lucas’ highly informed and encyclopedic audio commentary.

BIX BEIDERBECKE BIO                                          A legendary jazz figure who died way too young  at 28 (1903-1931) ‘Bix: ‘Ain’t none of them play like him yet’ (DVD, Kino Lorber, Not Rated) has been given a digital restoration.  A superlative cornet and piano player as well as composer, he influenced generations.  Brigitte Berman’s documentary boasts Bix’s only 3 moments on film and interviews with, among many, Hoagy Carmichael, Artie Shaw and Doc Cheatham.  The title refers to what Louis Armstrong said about the only cornetist he ever considered an equal.  The soundtrack has also been fully remastered.

FIERCE PROTECTOR                                       Lena Headey is a commanding presence – and the reason to see — ‘9 Bullets’ (Blu-ray, Screen Media, Not Rated).  Her wise and wary stripper becomes the caretaker of a young boy who witnessed his parents’ murder.  Sam Worthington’s local crime boss knows the kid must be silenced and only Headey can prevent that happening.  If this sounds like a lowbrow version of Gena Rowland’s Oscar nominated work as ‘Gloria,’ it pretty much is.