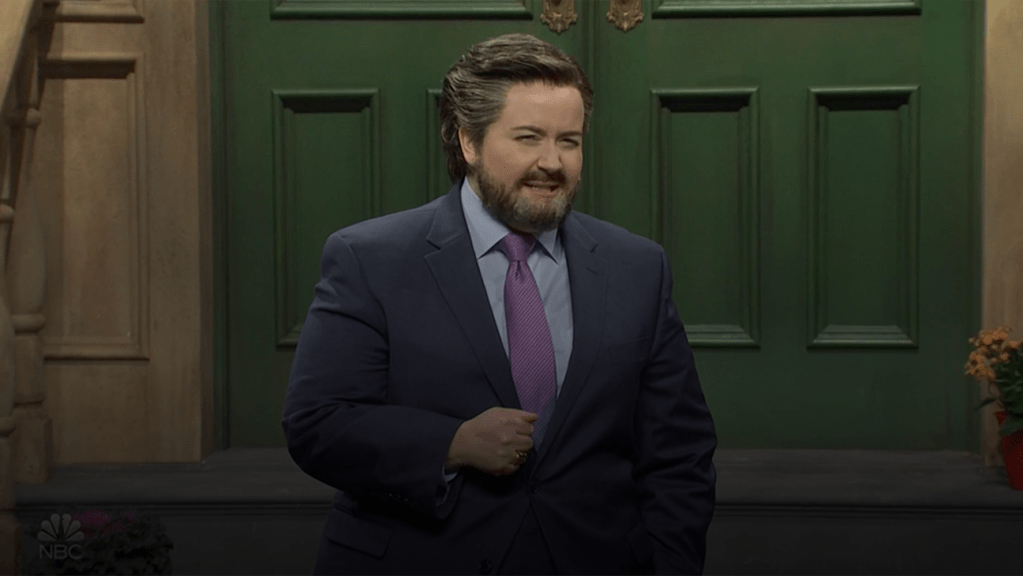 Saturday Night Live kicked off its cold open on Nov. 13 by welcoming back Aidy Bryant as Ted Cruz, who offered an alternate version of Sesame Street titled Cruz Street. The sketch was in reference to the children’s television character having recently encouraged kids to get vaccinated against COVID-19.

“I’m Ted Cruz,” Bryant’s Cruz began. “The last one invited to Thanksgiving.” Throughout the 7-minute opening, Bryant’s Cruz welcomed guest like Marjorie Taylor Greene, played by Cecily Strong. “I’m taking a break from releasing the numbers of Republicans who voted for the infrastructure bill so they get death threats,” Strong’s Greene declared.

The cold open poked fun at Andrew Dismukes’ Big Bird’s reaction to the COVID-19 vaccine. “My feathers fell out, my nuts got huge,” he said. It also made jokes about Borax being used to “cleanse you” from COVID-19, which Bryant’s Cruz used as a segue to introduce “medical expert” Joe Rogan, played by Pete Davidson.

Bryant’s Cruz then went on to explain “CRT,” which is supposed to mean critical race theory, but actually means “critical rights trampled,” he said. To discuss it, Bryant invited “Proud Boys” Bert and Ernie, who are engaged, though Bryant’s Cruz said their respective girlfriends were very happy with them.

And of course, it wouldn’t be a Sesame Street parody without Oscar the Slouch, a play on the show’s iconic character Oscar the Grouch. Bryant’s Cruz introduced Chris Redd’s Oscar by saying he’s “trained by the Democrats to suck the tete of the government,” to which Redd’s Oscar responded, “I use your tax money on drugs and pornography.”

The cold open ended with Cruz Street‘s word of the day “Freedom,” which welcomed back Chloe Fineman’s Britney Spears, with her hot pink dress and host of dance moves. “Oh my god, you guys, we did it!” she exclaimed. The moment referenced the pop singer’s thirteen year conservatorship being ended by a Los Angeles judge this week.

And now, Britney Spears with Cruz Street’s word of the week! pic.twitter.com/71vuJHuWDg

Lovecraft Country star Jonathan Majors kicked off the show as host, sharing in his monologue that he was once homeless, living in his car at 17 years old while working at Olive Garden and Red Lobster.

“It’s crazy how many people got their start at Red Lobster, both Nicki Minaj and Chris Rock worked there. I don’t know what they’re putting in them cheddar baked biscuits, but it’s workin,’” he said.

Musical guest Taylor Swift performed the 10-minute version of “All Too Well,” which appears on her re-recorded Red album. Behind her, the new short film based on the song, starring Sadie Sink and Dylan O’Brien, played as fake autumn leaves fell when she sang the lyric: “Autumn leaves falling like pieces into place.”

Colin Jost referenced the performance at the start of Weekend Update. “The lesson tonight is never break up with Taylor Swift or she will sing about you for 10 minutes on live TV,” Jost said. “At least return the scarf.”