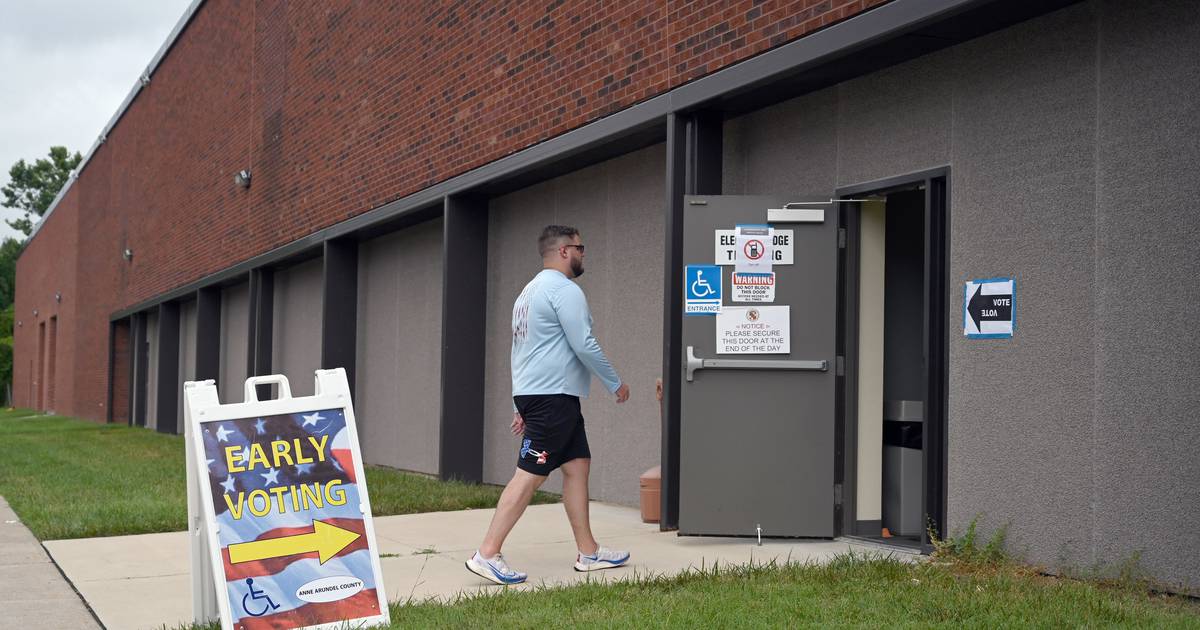 Significantly fewer Anne Arundel County voters cast ballots early in this year’s primary election compared to 2018, according to preliminary data from the State Board of Elections.

Maryland is a closed primary state, which means only Republicans or Democrats are eligible to vote. There are roughly 105,000 Anne Arundel County residents registered as third-party or unaffiliated voters.

Voter turnout is typically low during primary elections, but one held in the summer will practically guarantee low turnout, said David Garreis, the Anne Arundel County board of elections director. Garreis attributed this trend to several factors, such as vacations, lack of child care or residual health concerns related to the COVID-19 pandemic.

“Also, maybe the vote by mail is having an impact on the in-person turnout,” Garreis said. “We’ll see.”

Voting by mail has become much more popular since 2018, especially during the 2020 presidential election when the pandemic caused more voters to return ballots by mail than in any prior election and ballot drop boxes were introduced.

As of Thursday, unofficial data from the county’s board of elections showed about 12,000 people have voted by mail or returned a ballot to a drop box so far. A few dozen of those were ballots returned from nursing homes. Nearly 80% of mailed ballots, or 9,572, have been from Democrats, and 2,395 from Republicans.

That’s compared to about 2,000 people who voted by mail in the 2018 primary, according to an official tally from the State Board of Elections.

One group hoping to amp up turnout is the candidates, particularly those in contested races such as District 4 and District 7 on the Anne Arundel County Council and the Republican primary for county executive.

“I’ll be out knocking [on] doors, making phone calls, reaching out to voters every minute,” said Julie Hummer, a Democratic candidate for the District 4 seat on the County Council.

Hummer, a former Anne Arundel County school board member, is among four Democrats and two Republicans hoping to fill the seat left vacant by Democrat Andrew Pruski, who is term-limited. Pruski is running for the District 33A seat in the Maryland House of Delegates.

“There are still lots of people who haven’t voted or mailed in their ballots yet and still people to reach,” Hummer said.

Her opponents, medical device operator John Dove and business expert James Estepp said they also plan to campaign during the weekend, unlike Ash Khan, a program manager, who has been out of town for the past month due to a family emergency.

In the District 4 Republican primary, Tom Wieland, a pharmacist, is hoping to defeat Cheryl Renshaw, a real estate agent.

Renshaw is planning to visit residents in Arden-on-the-Severn, a neighborhood across the Severn River from Severna Park, an area she feels she hasn’t campaigned in enough, she said.

“I’m fine if I win or lose,” Renshaw said. “I just wanted to run to talk to the community and hopefully we just get a really great person in office.”

The council’s other contested primary is in District 7, a seat currently held by Edgewater Republican Jessica Haire. Haire is among five Republican candidates running for county executive.

Three Republicans, salesperson Shannon Leadbetter, Cailey Locklair, president of the Maryland Retailers Association, and Dawn Pulliam, who works in the defense sector, are all hoping to pull in the most votes during the District 7 primary.

Locklair said she’s content with the organizing she’s done and is ready for the voters to decide.

“I’ve knocked on over 2,800 doors over the course of my campaign,” Leadbetter said. “My plans for this weekend are to continue doing that.”

Pulliam said she’ll start campaigning in the northern part of the district this weekend and plans to finish in the Edgewater area.

“I’m going to be canvassing, out there sign waving,” Pulliam said. “Just getting out to last-minute voters. I’m feeling confident.”

The winner of the District 7 primary will face Democratic candidate and tech support specialist Shawn Livingston in the Nov. 8 general election.

Districts 1, 2, 5 and 6 on the council have only one member of each party running for the seat and therefore won’t be on the primary ballot. District 3 has only one candidate running, incumbent Republican council member Nathan Volke, who will not face a primary either.