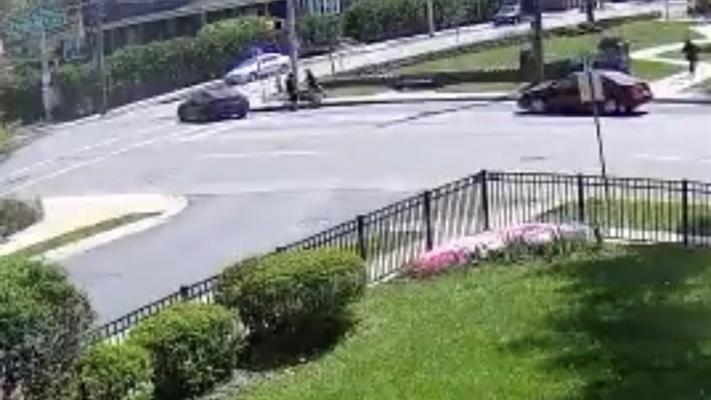 A safety digicam outdoors a synagogue in west Baltimore on Sunday captured the tried theft of a mud bike adopted by gunshots.

The incident occurred Sunday afternoon on the intersection of Park Heights Avenue and Pinkney Road. A suspect tried to steal a mud bike whereas somebody was driving it. Shots have been then fired on the sufferer and his father.

“When the father saw his son had just been robbed, he drove up the street trying to recover the bike and that’s when the suspect, and the suspect vehicle that dropped him off, made a U-turn and opened fire on the victim’s father, thankfully missing him and the bystanders who were walking by,” Baltimore City Councilman Isaac “Yitzy” Schleifer stated.

*Graphic video and sound warning*
No matter what number of violent crimes Baltimore City experiences annually, we will by no means settle for it as routine. Multiple photographs ringing out on a busy road in broad daylight, instantly in entrance of two homes of worship, and displaying no regard for pic.twitter.com/RCevl4c2Wd

“We have detectives working on it, pursuing leads,” Harrison stated. “It does speak to the brazenness for someone to attempt to steal a dirt bike while riding on it and do this in broad daylight in the middle of busy streets, it does speak to the brazenness of it. But that speaks to the culture of violence and the lack of perceived or real consequences that people would do that.”

City police reported 50 robberies came about in Baltimore over the weekend.

WBAL-TV 11 contributed to this report.