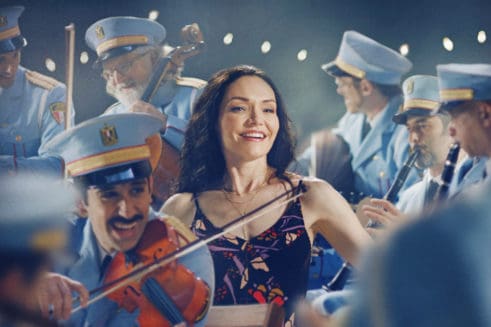 Paula Plum has added a brand new title to her spectacular resume of acclaimed actor, director, instructor and drama coach.

She’s now interim inventive director at Gloucester Stage Company. And she embraces her new place enthusiastically, as she’s achieved every time in her lengthy profession in Boston theater, which incorporates a number of reveals at MRT and a educating gig for a number of years at UMass Lowell.

“I’m loving it — it’s lots of fun,” she stated just lately by telephone. “But it’s a huge responsibility — and since I am a right-brained person, I have many spreadsheets to help me out.”

Plum, with 30 years performing expertise at GSC, was the logical candidate to exchange Bob Walsh when he stepped all the way down to return to directing after seven years as AD.

She was performing inventive director at Actors Shakespeare Project and has held an analogous publish for 17 years with WGBH’s “Celtic Christmas Sojourn” touring vacation present.

She and Walsh labored collectively in selecting the present summer season season, searching for an eclectic combine to attraction to the GSC summer season viewers.

“We read over 20 plays and came up with the season,” Plum stated. “This summer Gloucester Stage is taking you on a roller-coaster ride through a kaleidoscope of theatrical but very human experiences.”

The season contains “Gloria,” now by way of June 26, a satirical play about bold twenty-somethings at an esteemed New York cultural journal.

Next up is “Mr. Fullerton, Between the Sheets,” July 1-24, a turn-of-the-century story of unbridled ardour, impressed by Edith Wharton’s love letters and sexual awakening at age 46.

The ultimate performs are “Paradise Blue,” Aug. 26-Sept. 18, a robust, noir-inspired drama set in a sultry, jazz-filled membership, and the haunting “The Thin Place,” Sept. 30-Oct. 23, half ghost story and half dissection of the reality.

GSC can even do “A Midsummer Night’s Dream” in an outdoor area and Plum is already taking a look at performs for subsequent season.

But Paula Plum is as much as the problem.

AT MRT: Hootenanny! Bring your guitars and prepare for 3 casual hootenannies, or people music jam periods, following the upcoming Sunday matinees of Merrimack Repertory Theatre’s manufacturing of “Woody Sez: The Life and Music of Woody Guthrie.” The enjoyable takes place at 4:45 p.m. on Sundays, June 12, 19 and 26 at Merrimack Ales, 92 Bolt St., Lowell, which is 1.8 miles from the MRT. Local musicians and viewers members will probably be invited to carry out together with the forged. No payment to attend the Hootenanny whether or not you’ve seen the present or not. If you want to see it, tickets begin at $21 at mrt.org/woody. The present runs by way of June 26. … In different MRT information, Broadway performer Christina Acosta Robinson (“Summer: The Donna Summer Musical”) will substitute Tina Fabrique in acting at MRT’s forty third Anniversary Gala on June 17. She will carry out together with David M. Lutkin (“Ring of Fire”) and instrumentalist Rob Witmer (MRT’s “Best Summer Ever”). The festive night begins at 6 p.m. with cocktails, dinner and a silent public sale within the Hall of Flags at Lowell Memorial Auditorium adopted by the performances and a stay public sale in MRT’s Liberty Hall dwelling adjoining to the LMA. For tickets and data, go to mrt.org/gala43 or name 978-654-4678.

HANOVER HAPPENINGS: June’s calendar is full at Worcester’s Hanover Theatre and Conservatory. The lineup contains “50 Years of Billy,” a tribute present to America’s “Piano Man” and probably the most celebrated songwriters of the twentieth century. It’s on at 7:30 p.m. Sunday. Next week, the nationwide touring manufacturing of “The Band’s Visit,” performs the Mainstage, June 16-19. With a seductive Tony- and Grammy-winning rating, the present rejoices in music’s potential to make us snort, cry and produce us collectively. Acclaimed veteran musician Gordon Lightfoot arrives at 7:30 p.m. June 24, and the laugh-a-minute romp “Menopause, The Musical” is on at 2 p.m. June 25. Visit thehanovertheatre.org for the complete line-up and ticket data.

SASSY AND SULTRY: Greater Boston Stage Company’s spreading rhythm and humor with the infectious “Ain’t Misbehavin’: The Fats Waller Musical Show” on-stage in Stoneham June 9-26. The high-energy musical celebration transforms the theater into the steamy Savoy Ballroom and incomparable Cotton Club to deliver audiences the songs that made Fats Waller well-known. Tickets $62-$67 for adults; $57-$62 for seniors; and $20 for college students with legitimate ID at https://internet.ovationtix.com/trs/pr/1050914.