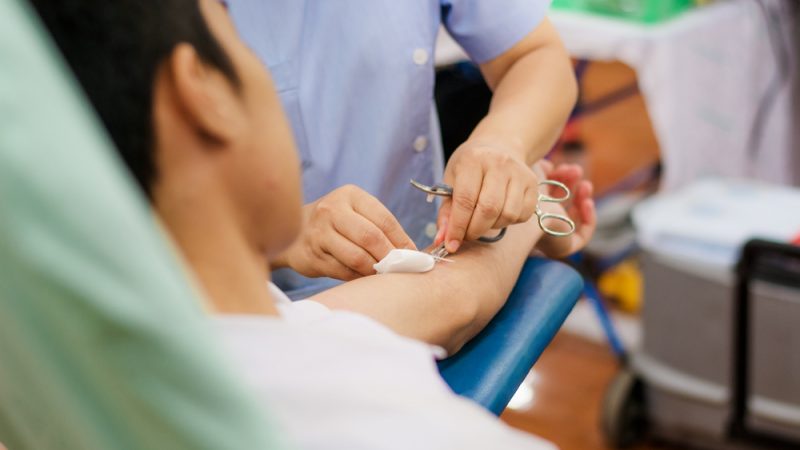 The revision of the EU’s blood directive offers the chance to overhaul outdated restrictions that prevent those in same-sex relationships from becoming blood and plasma donors.

The blood directive was conceived in the 2000s when this donor eligibility requirement was still considered a justifiable safety measure to protect recipients from infectious disease risks.

At that time, a higher prevalence of transfusion-transmitted infections (TTIs), especially for HIV/AIDS, had a high prevalence in the MSM population, while no reliable tests for the virus were available.

Lawmakers interpreted the mere belonging to the MSM category as implying a ‘high risk of acquiring severe infectious diseases’ transmitted by blood, therefore, disposing of their permanent deferral from blood and blood components donations – known as ‘blanket bans’.

The matter has become intrinsically contested, with such exclusion debated in different member states as it becomes considered to be no longer socially acceptable.

Sex between men remains the main mode of transmission of HIV in Western Europe, according to the EU’s infectious disease agency (ECDC). However, the risk of HIV and other TTIs transmission by donations from MSM is significantly reduced by the more sensitive and reliable tests available today.

The topic was brought to the EU’s Court of Justice by a French citizen whose blood donation was refused by a doctor on the basis of a national decree who prevented him from donating if he had had sexual relations with another man.

In its ruling, the Luxembourg-based court noted that the French decree “by imposing a permanent deferral on any man who has had or has sexual relations with another man, introduces into the system of donor selection clear indirect discrimination.”

However, the judges concluded that the decree respected the blood directive and that the compliant’s deferral from blood donations was admitted by the EU law.

Many countries are already changing

The undergoing revision of the blood directive offers a chance to fix the long-standing issue of the permanent deferral.

Several member states have already changed the policy moving to a temporary deferral criterion, meaning that MSM donors are excluded for a defined timeframe after the risk behaviour and having undergone an appropriate test.

The revision of restrictions on MSM donors is based on epidemiological data, as well as the uniform use of very specific nucleic acid tests (NAT) for HIV, Hepatitis B (HBV=, and Hepatitis C (HCV), which can detect each of these viruses within a specific time-period following infection.

Finland implemented a 1-year deferral in 2013, as well as Ireland in 2017. At the beginning of 2022, the French ministry of health decided that MSM are able to donate blood with no preconditions.

From now on, they will simply have to answer a questionnaire in the same way as heterosexuals. The new questionnaire will focus on donors’ “sexual practices” rather than their “sexual orientation”.

In other countries such as Belgium, Germany and Austria, blood donation by homosexuals is still subject to certain conditions. In many cases, the restrictions do not affect women, including women who have sex with women.

Unlike blood for transfusion, plasma undergoes several manufacturing steps which effectively remove and inactivate potential pathogens which may be present in the plasma.

For this reason, transfusion-transmitted pathogens such as Chikungunya, Dengue, West Nile or Zika virus are readily inactivated and removed during the manufacturing of plasma-derived medicinal products (PDMPs).

However, the acceptance or non-acceptance of MSM donors has a significant impact on plasma donations, as well as on the social acceptance and promotion of blood donation.

The specific temporary deferral rules also differ between those countries that are relaxing restrictions on MSM donors.

And the fact that there is no single EU deferral time can complicate things, creating fragmented approaches.

And this “variability across the EU creates particular difficulties for the supply of plasma to medicinal product manufacturing companies working internationally,” the European Commission said in the 2019 evaluation of the EU legal frameworks on blood, tissues and cells.

According to the EU’s association of PDMPs, the current eligibility requirements, as well as the technical requirements for plasma collection, when compared to blood, do not reflect the scientific developments and state of the art technology of plasma manufacturing which have been made over the past decades.

Donor eligibility criteria for manufacturing of PMDPs are expected to be addressed in the revision of the blood, tissue, and cell directive (BTC).