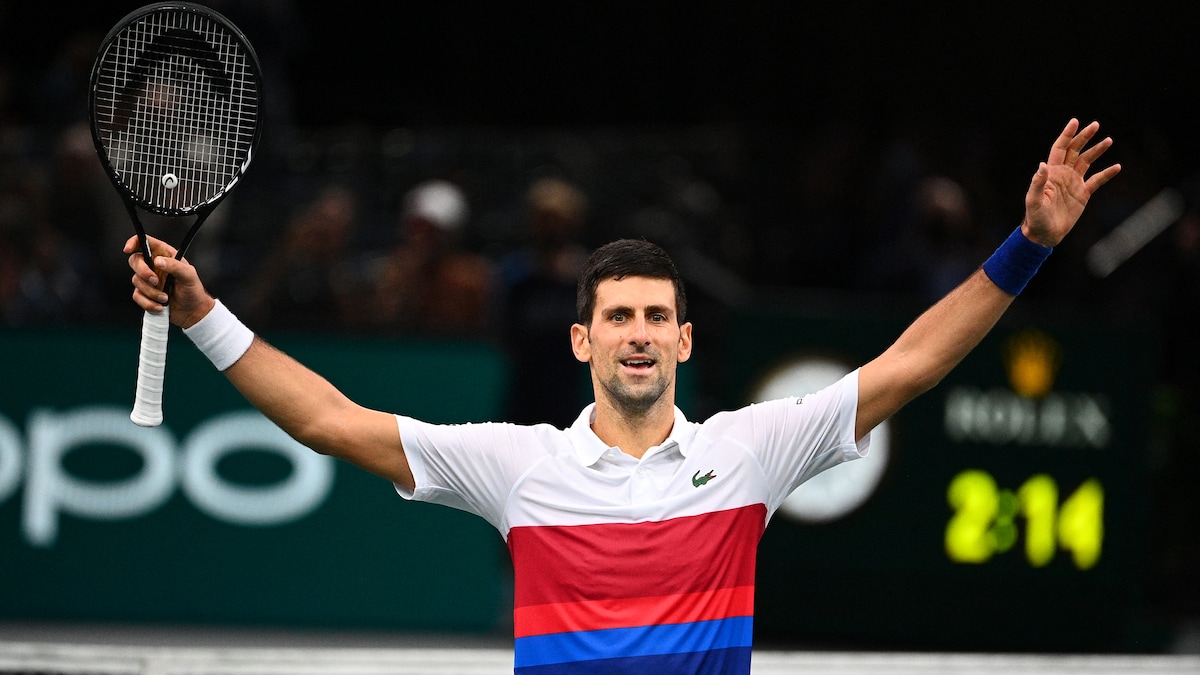 Novak Djokovic is ready to cap a draining year at the ATP Finals as he enters the end-of-year tournament with Roger Federer’sall-time wins record firmly in his sights. Recently crowned the season-ending world number one for a record seventh time, Djokovic just missed out on winning all four Grand Slams in a single year. Defeat in the US Open final to Daniil Medvedev in September came after triumphs at the Australian Open, Roland Garros and then Wimbledon. That left him level with both Federer and Rafael Nadal on 20 Grand Slam wins, but he will equal his long-time Swiss rival’s record of six Finals titles should he prevail in Turin, where the tournament moved over a decade in London.

He is in good form after overcoming world number two Medvedev in the Paris Masters final last weekend, his first tournament following a near two-month break.

“I haven’t played so much as in previous years in terms of the amount of tournaments but I did have a lot of exhausting events that I played, particularly in grand slams,” Djokovic told reporters.

“When I say exhausting I don’t just mean physically but emotionally and mentally, probably unlike any other year that I’ve had.

“It did take a lot out of me and I just felt like I needed that break in order to rejuvenate and try to get ready for a strong finish to the season.”

World number one Djokovic has been drawn with Stefanos Tsitsipas, Andrey Rublev and Casper Ruud in the Green Group at the November 14-21 tournament, which features the world’s top eight ranked players split equally into two groups from which four players qualify for the semi-finals.

The 34-year-old Serb hasn’t won the ATP Finals since 2015 but has neither Federer nor Nadal in his way this year and begins his bid for end-of-season glory against Ruud on Monday afternoon.

“It could be the amount of energy you spend during the season, you maybe don’t have enough in tank for that final push,” said Djokovic as to why his last win was six years ago.

“Playing at the highest level against the top eight players in the world every single match is really high intensity… It could just be the case of a semi-full tank, you’re just not able to perform at your best every match, and that’s what it takes here.”

Djokovic said before the Paris Masters that he would wait for a decision from Tennis Australia regarding players and vaccination status, but made no comment on one of the sport’s hottests issues on Friday.

It looks all but certain that only those players who have been vaccinated will be allowed to compete in the first Grand Slam of the 2022 season which gets underway in Melbourne on January 17.

Medvedev, who takes on Hubert Hurkacz is his opening Red Group match on Sunday, had been coy about whether he would travel to Melbourne, saying he didn’t want to talk about personal medical matters.

But on Tuesday the 25-year-old posted a message on Twitter to the Australian Open’s official account saying “see you in January!”.

“If you’re vaccinated you can go, if you’re not you cannot go so that’s the answer,” said Medvedev.

“I decided for all my career… not to talk about medical, it’s not only about the vaccine, it’s anything that comes to my body or my health… The thing about Australia seems clear and as I said before everyone who is there is vaccinated.”