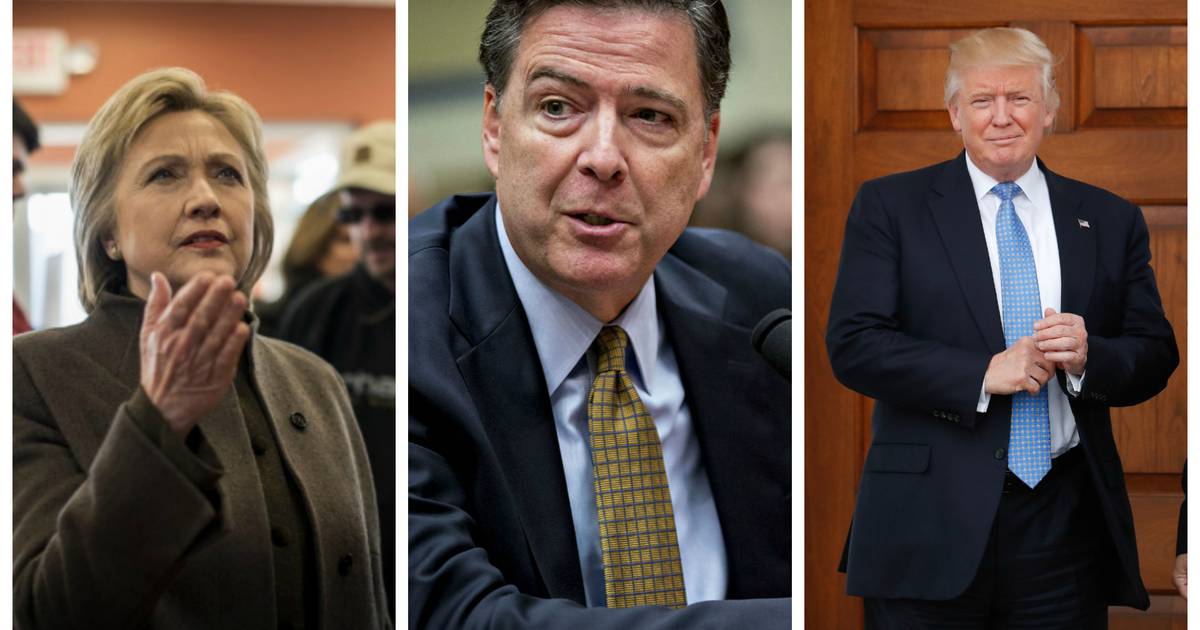 It took many accidents, catastrophes, misjudgments and mistakes for Donald Trump to win the presidency in 2016. Two particularly important errors came from James Comey, then head of the FBI, who was excessively worried about what Trump’s supporters would think of the resolution of the investigation into Hillary Clinton’s emails.

First, in July 2016, Mr. Comey broke protocol to give a news conference in which he criticized Ms. Clinton even while announcing that she’d committed no crime. He reportedly did this because he wanted to protect the reputation of the FBI from inevitable right-wing claims that the investigation had been shut down for political reasons.

Then, on Oct. 28, just days before the election, Mr. Comey broke protocol again, telling Congress that the Clinton investigation had been reopened because of emails found on the laptop of former congressman Anthony Weiner. The Justice Department generally discourages filing charges or taking “overt investigative steps” close to an election if they might influence the result. Mr. Comey disregarded this because, once again, he dreaded a right-wing freakout once news of the reopened investigation emerged.

“The prospect of oversight hearings, led by restive Republicans investigating an FBI ‘cover-up,’ made everyone uneasy,” The New Yorker reported. In Mr. Comey’s memoir, he admitted fearing that concealing the new stage of the investigation — which ended up yielding nothing — would make Ms. Clinton, who he assumed would win, seem “illegitimate.” (He didn’t, of course, feel similarly compelled to make public the investigation into Mr. Trump’s ties to Russia.)

Mr. Comey’s attempts to preempt a conservative firestorm blew up in his face. He helped put Mr. in the White House, where Mr. Trump did generational damage to the rule of law and led us to a place where prominent Republicans are calling for abolishing the FBI.

This should be a lesson about the futility of shaping law enforcement decisions around the sensitivities of Mr. Trump’s base. Yet after the FBI executed a search warrant at Mr. Trump’s beachfront estate this week, some intelligent people have questioned the wisdom of subjecting the former president to the normal operation of the law because of the effect it will have on his most febrile admirers.

Andrew Yang, one of the founders of a new centrist third party, tweeted about the “millions of Americans who will see this as unjust persecution.”

Damon Linker, usually one of the more sensible centrist thinkers, wrote, “Rather than healing the country’s civic wounds, the effort to punish Trump will only deepen them.”

The Atlantic’s Tim Alberta described feeling “nauseous” watching coverage of the raid. “What we must acknowledge — even those of us who believe Trump has committed crimes, in some cases brazenly so, and deserves full prosecution under the law — is that bringing him to justice could have some awful consequences,” he wrote.

In some sense,Mr. Alberta’s words are obviously true; Trumpists are already issuing death threats against the judge who signed off on the warrant, and a Shabbat service at his synagogue was reportedly canceled because of the security risk. The former president relishes his ability to stir up a mob; it’s part of what makes him so dangerous.

We already know, however, that the failure to bring Mr. Trump to justice — for his company’s alleged financial chicanery and his alleged sexual assault, for obstructing Robert Mueller’s special counsel investigation and turning the presidency into a squalid influence-peddling operation, for trying to steal an election and encouraging an insurrection — has been disastrous.

What has strengthened Mr. Trump has not been prosecution but impunity, an impunity that some of those who stormed the Capitol thought, erroneously, applied to them as well. Mr. Trump’s mystique is built on his defiance of rules that bind everyone else. He is reportedly motivated to run for president again in part because the office will protect him from prosecution. If we don’t want the presidency to license crime sprees, we should allow presidents to be indicted, not accept some dubious norm that ex-presidents shouldn’t be.

No doubt, Mr. Trump’s most inflamed fans might act out in horrifying ways; many are heavily armed and speak lustily about civil war. To let this dictate the workings of justice is to accept an insurrectionists’ veto. The far right is constantly threatening violence if it doesn’t get its way. Does anyone truly believe that giving in to its blackmail will make it less aggressive?

It was Mr. Trump himself who signed a law making the removal and retention of classified documents a felony punishable by up to five years in prison. Those who think that it would be too socially disruptive to apply such a statute to him should specify which laws they believe the former president is and is not obliged to obey. And those in charge of enforcing our laws should remember that the caterwauling of the Trump camp is designed to intimidate them, and such intimidation helped him become president in the first place.

Mr. Trump shouldn’t be prosecuted because of politics, but he also shouldn’t be spared because of them. The only relevant question is whether he committed a crime, not what crimes his devotees might commit if he’s held to account.

Michelle Goldberg (Twitter: @michelleinbklyn) is a columnist for The New York Times, where this piece originally appeared.