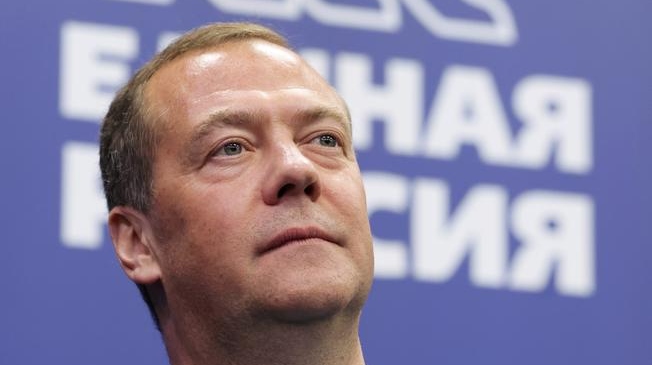 One of Russian President Vladimir Putin’s top allies said on Tuesday (20 September) he favoured holding referendums in two eastern Ukrainian regions in order to formally make them part of Russia, a move that would seriously escalate Moscow’s confrontation with the West.

The statement by Dmitry Medvedev, a former president who is currently deputy chairman of the Security Council, marks a hardening of Russian rhetoric on Ukraine and is the strongest sign yet that the Kremlin is considering going ahead with a plan that Ukraine and the West have said would be illegal.

He made his comments as Putin ponders his next steps in a nearly seven-month-old conflict that has triggered the biggest confrontation with the West since the 1962 Cuban Missile Crisis and after a battlefield defeat in northeast Ukraine.

Officials in the Russian-controlled southern Kherson region on Tuesday also requested a referendum on joining Russia.

Medvedev suggested that incorporating the LPR and DPR into Russia – collectively known as the Donbas – would be an irreversible step once completed. Anyone then attacking them would be assaulting Russia itself which would, under its own law, be entitled to respond in self-defence.

“Encroachment onto Russian territory is a crime which allows you to use all the forces of self–defence,” Medvedev said in a post on Telegram. “This is why these referendums are so feared in Kyiv and the West.”

No future Russian leader be able to constitutionally reverse the outcome of the votes, he wrote.

Washington and the West have so far been careful not to supply Ukraine with weapons that could be used to shell Russian territory, and Medvedev’s interpretation of what de facto annexation would legally mean from Moscow’s point of view looked like a future warning to the West.

“They (the referendums) would completely change the vector of Russia’s development for decades. And not just of our country. The geopolitical transformation of the world would be irreversible once the new territories were incorporated into Russia,” he wrote.

It is unclear how the referendums would be held given that Russian and Russian-backed forces control only around 60% of the Donetsk region while Ukrainian forces are trying to retake Luhansk.

Pro-Russian officials have previously said the referendums could be held electronically and that everything was technically ready for them to go ahead.

Medvedev’s comments came as Ukraine said its troops had retaken the village of Bilohorivka in the Luhansk region and were preparing to recapture all of the province which until now had been fully occupied by Russian forces.

Unverified footage on social media showed Ukrainian forces in the village, which is only 10 km west of the city of Lysychansk, which fell to the Russians after weeks of grinding battles in July.

“There will be fighting for every centimetre,” Luhansk governor Serhiy Gaidai wrote on Telegram. “The enemy is preparing their defence. So we will not simply march in.”

Russia named taking full control of Luhansk and the neighbouring province of Donetsk as primary goals of what it called its “special military operation” in Ukraine, alleging that Russian speakers there were being persecuted and even shelled by Ukrainian government forces, something Kyiv denied.

Ukrainian troops started to push into Luhansk after driving Russian forces out of northeastern Kharkiv province in a lightning counter-offensive this month.

“The occupiers are clearly in a panic,” Ukrainian President Volodymyr Zelenskyy said in a televised address late on Monday, adding that he was now focused on “speed” in liberated areas.

“The speed at which our troops are moving. The speed in restoring normal life,” Zelenskyy said.

The Ukrainian leader also hinted he would use a video address to the United Nations General Assembly on Wednesday to call on countries to accelerate weapons and aid deliveries.

In the south, where another Ukrainian counter-offensive has been making slower progress, Ukraine’s armed forces said they had sunk a barge carrying Russian troops and equipment across a river near Nova Kakhovka in the Kherson region.

“Attempts to build a crossing failed to withstand fire from Ukrainian forces and were halted. The barge … became an addition to the occupiers’ submarine force,” the military said in a statement.

Reuters could not independently verify either side’s battlefield reports.