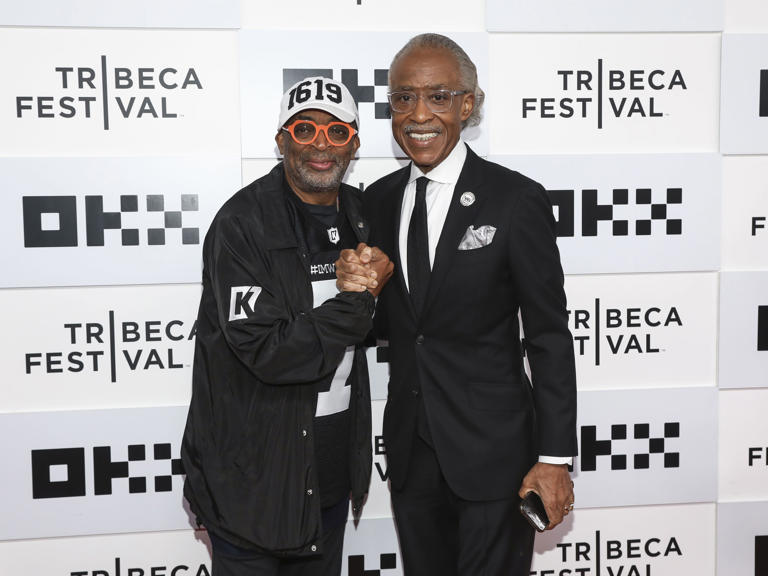 By Jake Coyle,
The Associated Press

On the eve of Juneteenth, the Tribeca Festival came to a close with the documentary “Loudmouth.” The premiere united Civil right giant Rev. Al Sharpton and legendary director, screenwriter and actor, Spike Lee, on the stage— two towering New York figures who have each been vilified and celebrated for careers championing racial justice.

The event was held on June 18 at the Borough of Manhattan Community College. The documentary celebrates Sharpton with the kind of big-screen portrait that has been commonplace for an older generation of civil rights leaders, but had, until “Loudmouth,” eluded the 67-year-old activist.

“Loudmouth” contextualizes Sharpton’s legacy as an extension of Martin Luther King Jr., Malcolm X, the Rev. Jesse Jackson, Rep. John Lewis, and others, while at the same time chronicling his unique longevity despite plenty of naysayers along the way.

“Shoot your best shot,” Sharpton said during a question and answer session held after the film. “I’m still here.”

Lee, a longtime friend who cast Sharpton in a small role in 1992′s “Malcolm X,” cheered on Sharpton for being there “from the get-go, fighting the good fight.”

“Everybody takes blows but you have to get up and keep stepping,” said Lee, who joined Al Sharpton and Executive Producer of the film, John Legend on stage. “And you’re still doing it today.”

“Loudmouth,” which is seeking distribution at Tribeca, was introduced by its co-founder Robert De Niro. He drew a firm distinction between Sharpton and other “loudmouths” on today’s airwaves and at the Jan. 6 hearings in Washington.

“How interesting that the committee and the Rev. are on the same page exposing the lies and the liars who threaten our democracy,” said De Niro. “They want to take away our right to vote and deny us social justice. While Washington deals with the lies and the big lie, tonight you’re in the company of patriots who challenges us to get to the truth.”

“Loudmouth,” directed by Josh Alexander, is framed around a sit-down interview with Sharpton, who chronicles his story as a consistent fight to keep social justice in the headlines. “Nobody calls me to a keep a secret,” Sharpton said at the memorial service for George Floyd.

To Sharpton, that was his purpose — “the blow-up man,” he once called himself — to tirelessly agitate and stir up enough media attention and to spotlight injustice. Of course, that approach earned Sharpton plenty of detractors — almost all of whom are White — who have chided him as a racial opportunist. That was especially after his involvement in the 1987 case of Tawana Brawley, whose allegation was that she had been raped and kidnapped by a group of men in Dutchess County, N.Y. The men were later found to have been fabricated by a special state grand jury.

In the film Sharpton argues that his mission in that case and others were always to give someone their day in court. Ahead of the film, Alexander said Sharpton’s one request was to “get the context right.” And in a litany of other instances, Sharpton has been there to advocate, consult and lend support for Black people. On June 18, family members of Floyd, Eric Garner and others were in the audience.

“It just makes you realize that anybody who’s making noise for justice, especially for an oppressed minority, is always going to be treated as a persona non grata (an unwelcome person) in society,” Legend said. “They’re always going to be unpopular to an extent because they’re fighting to disturb a status quo that protects a lot of people.”

When Legend approached Sharpton about making the documentary, he and producers surprised Sharpton with the idea of it being directed by Alexander, a White, Jewish filmmaker from California. They argued that the film would be more objective from the perspective of a White filmmaker, Sharpton said.

“I said: ‘I’ll tell you what. If it works, I’ll be there to take a bow. If it doesn’t, I’ll be picketing you outside,’” Sharpton said.

Legend — who Sharpton praised as a pop star and a “crossover artist”, was bold in affiliating himself with a figure seen by some as “risque” — said he had been discouraged by what he saw as a backlash to the reckoning that followed Floyd’s death and recent battles over school textbooks. But Legend said he found inspiration watching Sharpton in “Loudmouth.”

“Every time we have progress, there’s a backlash, and the backlash is: ‘Oh, we’ve got to control this narrative,’” said Legend. “Everybody knows how important narrative is and the importance of who’s telling the story and what perspectives are being represented.”

Lee, who mentioned twice about being traumatized by an early school field trip to see “Gone With the Wind,” said “Loudmouth” should be shown in schools. As a chronicle from the front lines of racial tensions in New York, Lee said, it was a valuable reminder.

“You have to show that racism doesn’t really have a particular ZIP code,” said Lee, who wore a “1619” hat. “This is not Shangri-La. There’s a whole lot of messed up here that continues today.”

Sharpton often returned to the question of how much has changed in the last half of the century. Sharpton recently gave eulogies for several victims in Buffalo of last month’s racist mass shooting that killed 10 people in a supermarket. Still, he said he also sees great progress and more Black people in power than ever before.

“We’re not out of the woods yet,” Sharpton said. “But we’ve built enough paths in the woods to believe we can get out.”

Help us Continue to tell OUR Story and join the AFRO family as a member – subscribers are now members!  Join here!