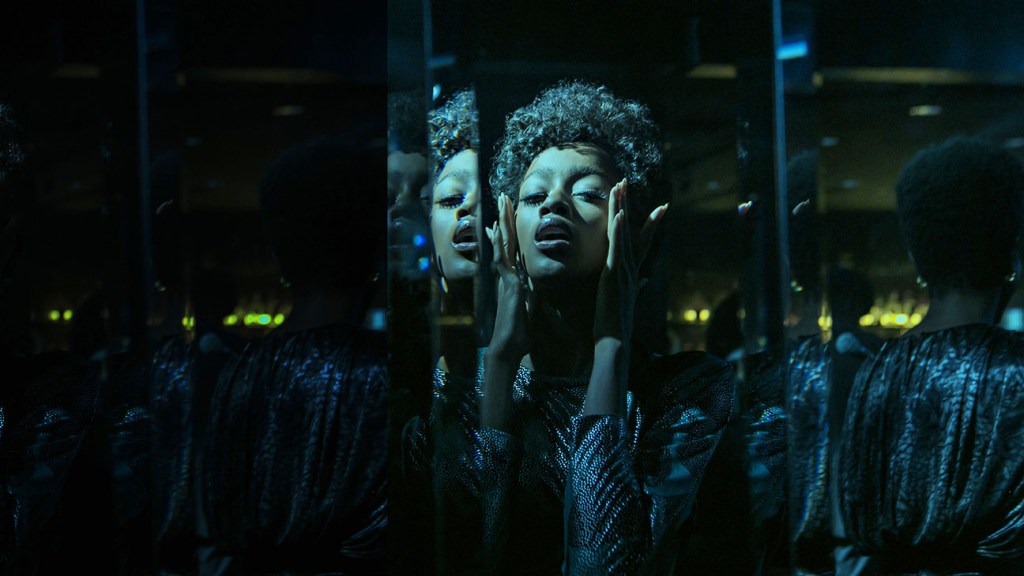 The protagonist of the new Netflix film written by Lena Waithe, Beauty, is an enigma. Her facial expressions are no compass for her feelings. Her eyes stay wide, lips perpetually parted. Tonal variations are scarce too: Grace Marie Bradley, the actress who plays the titular character, delivers her lines in a husky, suggestive whisper. It’s difficult to tell how intentional all this mystery is, which makes the occasional raised eyebrow, playful smirk or tear streaming down the face hard to interpret.

You wonder: Who is Beauty? Is she simply a sheltered girl groomed by domineering parents for stardom? A young adult navigating the bounds of a secret relationship with her girlfriend? A gifted singer exclusively interested in honing her musical talents?

Dreamy and enigmatic to a fault.

And then: What is Beauty? Is it a portrait of a young woman balancing family, love and career? An allegory about the perils of a parasitic music industry? Or a comment on fame and how it changes Beauty and everyone around her?

Stylishly directed by Andrew Dosunmu (Mother of George, Where Is Kyra, Restless City), Beauty, like its protagonist, is searching — for itself and its purpose. The film broadly tells the story of a young singer mere steps away from the spotlight. When offered a lucrative contract by an overzealous label executive (Sharon Stone), Beauty must seriously consider if she is ready to be a star. Fame — even the expectation of it — will alter the already fragile dynamics of her insular world.

Her parents take opposing stances. Mother (a sharp Niecy Nash), a singer who never broke out commercially, wants to protect her daughter from a thirsty industry. She warns Beauty that these white people are just looking for their next target, that they don’t care about her. “You’ll be a fantasy,” she says to her daughter. Father (a cutting Giancarlo Esposito) sees Beauty as a cash cow, a prized possession he’s poured resources into. Her brothers, Abel (Kyle Bary) and Cain (Michael Ward), trust her to do what’s best for the family. It’s Beauty’s girlfriend, Jasmine (Aleyse Shannon), who worries about our protagonist the most. She warns the naïve chanteuse about people taking advantage of her and about the chasm that will inevitably open up between them should Beauty sign that contract.

Beauty tries to do a lot with this straightforward story, but struggles in execution. It’s too billowy to be a study of a young woman on the cusp of fame. The characters — especially Beauty — are vague sketches, their interactions predictable and perfunctory. They’re better suited to an allegory, but Beauty isn’t quite that either. The film contains strokes of well-known stories of young Black artists and their warped, often fatal, relationships with the music industry; Whitney Houston is the most obvious comparison, but there are hints of Michael Jackson, too. But ultimately, this is a film of impressions rather than a larger point or more focused thesis.

In lieu of a throughline, Beauty offers beautiful, indulgent vignettes — aesthetically pleasing and immersive episodes lacking in ideas but full of vibes. Dosunmu’s style is distinguished by a soft color palette dictated by the orange-red glow of dusk and close-ups of Beauty’s immutable face. Scene breaks in the form of muted flash-forwards (and the occasional flashback) and archival footage of the central character’s favorite performers — Donna Summers, the Clark Sisters — add to the film’s ethereal, unreal quality.

A workaday script casts these flourishes in a suspicious light. From what are they trying to divert our attention? Look past them and more questions emerge: What are the stakes of Beauty’s story? Why does her character’s development feel so superficial? And most bizarrely, why, in a drama about music, do we never hear a single note from the star herself?

Beauty signs the contract with Colony Records, which sets off a torrent of new issues between her and her family. She moves to an unspecified city with Jasmine, and this chapter in the couple’s life is fed to us like flashes from a music video. The moments bleed into one another: Cuddling and teasing in bed fade into studio rehearsals; city excursions give way to the star’s manager coaching her on how to avoid questions about race, relationships and sexuality.

As Beauty begins to feel more pressure from her label, the film signals a cataclysmic event on the horizon. But it never comes; Beauty doesn’t commit to any kind of breathtaking climax. The devastating changes telegraphed early in the film are subtle and creeping. Beauty becomes more self-assured, which helps her wrest control of her life and stand up to her father. But she also becomes more alienated from Jasmine and her family. Bradley’s gauzy performance obfuscates instead of clarifies the direction of the starlet’s development.

Fame is a noxious, haunting circumstance in Beauty, but the film doesn’t offer convincing analysis or observations of that phenomenon. It teases and suggests the horrors of the parasitic industry in a manner that leaves one yearning. Had Beauty’s character been more defined, she could have been bridged the gap between what the film clearly itches to say and its more impressionistic formal ambitions. As it stands, Beauty feels too distant, treating its mercurial protagonist just as her mother feared — like a fantasy.