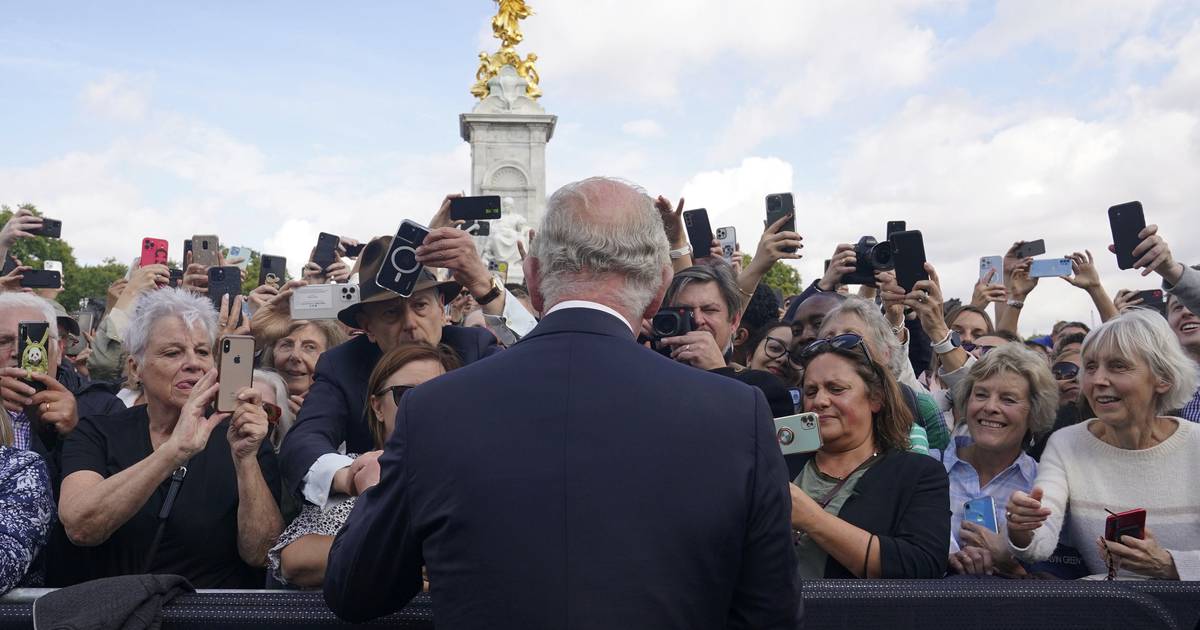 LONDON — As the United Kingdom mourns a beloved queen, the nation is already wondering how King Charles III will reign and whether his monarchy will depart from the traditions of his mother.

If his first full day on the throne is any indication, Charles seemed ready to chart at least a slightly different course.

When Charles traveled to Buckingham Palace for the first time as the new king Friday, his limousine snaked through a sea of spectators then stopped short of the palace gates before he got out and shook hands with well-wishers. Charles looked more like a U.S. president on the campaign trail than the latest steward of a 1,000-year-old hereditary monarchy.

It’s not that Queen Elizabeth II didn’t meet her subjects. She did, often. But this felt different — a bit less formal, a bit more relaxed and personal. Charles spent almost 10 minutes greeting people pressed up against the crowd-control barriers, smiling, waving, accepting condolences and the occasional bouquet of flowers as the audience broke out in a chorus of “God Save the King.”

After inspecting the tributes to his mother lined up outside the palace, he waved once more and walked through the gates with Camilla, the Queen Consort.

“It was impressive, touching, a good move to come out to the crowds,” said Ammar Al-Baldawi, 64, a retiree from Hertfordshire who was among the throngs outside the palace. “I think that’s where the royal family needs to communicate with the people now.”

Charles’ efforts to engage with the public more intimately reflect the fact that he needs their support. There are difficult issues ahead, most pressingly how the 73-year-old king will carry out his role as head of state.

The laws and traditions that govern Britain’s constitutional monarchy dictate that the sovereign must stay out of partisan politics, but Charles has spent much of his adult life speaking out on issues that are important to him, particularly the environment.

His words have caused friction with politicians and business leaders who accused the then-Prince of Wales of meddling in issues on which he should have remained silent.

The question is whether Charles will follow his mother’s example and muffle his personal opinions now that he is king, or use his new platform to reach a broader audience.

In his first speech as monarch, Charles sought to put his critics at ease.

“My life will of course change as I take up my new responsibilities,’’ he said. “It will no longer be possible for me to give so much of my time and energies to the charities and issues for which I care so deeply. But I know this important work will go on in the trusted hands of others.”

Ed Owens, a historian and author of “The Family Firm: Monarchy, Mass Media and the British Public, 1932-53,” said that while Charles will tread a careful path, it’s unlikely he will suddenly stop talking about climate change and the environment — issues where there is a broad consensus about the urgent need for action.

“To not do so would not be true to the image that he has until this moment developed,” Owens said.

John Kerry, the U.S. special envoy for climate, said he hopes Charles will continue speaking out about climate change because it is a universal issue that doesn’t involve ideology. Kerry was in Scotland to meet with the Prince of Wales this week, but the session was canceled when the queen died.

“It doesn’t mean he’s involved in the daily broil of politics or speaking for a specific piece of legislation,” Kerry told the BBC. “But I can’t imagine him not … feeling compelled to use the important role of the monarch, with all the knowledge he has about it, to speak out and urge the world to do the things the world needs to do.”

Constitutional lawyers have debated for years whether Charles has pushed the boundaries of conventions designed to keep the monarchy out of the political fray.

His so-called Black Spider Memos — named for his spidery handwriting — to government ministers have been cited as evidence that he wouldn’t be neutral in his dealings with Parliament.

The debate has also spilled over into fiction.

In the 2014 play “King Charles III,” playwright Mike Bartlett imagines the new king, uncertain of his powers and moved by his conscience, causing a constitutional crisis by refusing to sign a new law restricting press freedom.

It is an illustration of the tensions inherent in a system that evolved from an absolute monarchy to one in which the sovereign plays a largely ceremonial role. While Britain’s unwritten constitution requires that legislation must receive royal assent before it becomes law, this is considered a formality that the monarch cannot refuse.

In an interview for a 2018 documentary broadcast on his 70th birthday, Charles said he would behave differently when he became king because the monarch has a different role than the Prince of Wales.

Even so, he questioned the criticism he has received over the years.

“I’ve always been intrigued if it’s meddling to worry about the inner cities, as I did 40 years ago, and what was happening or not happening there, the conditions in which people were living,” he wondered. “If that’s meddling, I’m very proud of it.”

On another issue facing the new king, Charles has said clearly that he intends to reduce the number of working royals and cut expenses as he seeks to ensure the monarchy better represents modern Britain.

Robert Lacey, a royal historian and adviser on the Netflix series “The Crown,” said this initiative underscores the important role of Prince William, who is now heir to the throne.

William has already made the environment one of his primary issues, and he is likely to take an even more prominent role in this area now that his father is king, Lacey told the BBC.

But there is another clue to the new king’s plans for his reign, and that’s his choice of a name.

But Charles rejected the idea and kept his own name. That’s a “clear message” that the king will continue to champion the causes he backed as Prince of Wales, Lacey said.

It was his father, Prince Philip, who identified ways in which the neutral monarchy could advocate for youth development and the environment — “really important causes that they could push forward without being accused of partisanship,” he said.