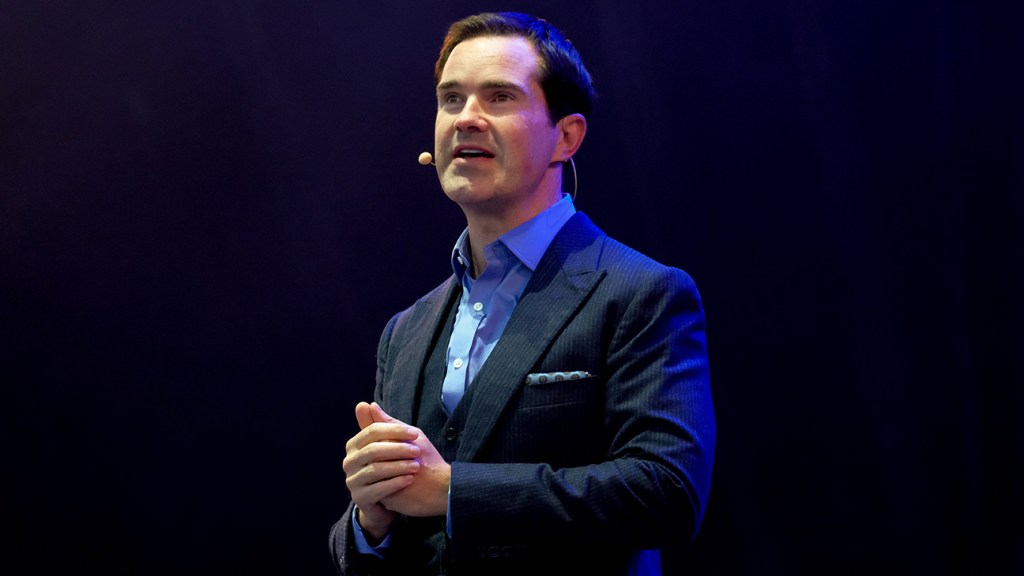 Jimmy Car is facing criticism from U.K. politicians and anti-hate groups for a portion of his latest Netflix comedy special His Dark Materials, in which he discusses the Nazi genocide of Roma during the Holocaust.

During the special which dropped on the streamer Dec. 25, 2021, Carr remarks on Dwarfism, sexual abuse in the Boy Scouts, Bill Cosby and cancel culture among other topics. But in one part of the British-Irish comedian and TV presenter’s hour-long special for the streamer, he brings up the mass murder of the Roma and Sinti during the Holocaust.

“We are absolutely appalled at Jimmy Carr’s comment about persecution suffered by Roma and Sinti people under Nazi oppression, and horrified that gales of laughter followed his remarks,” Olivia Marks-Woldman, the trust’s chief executive, said in a statement posted to Twitter.

Here is a statement from our CEO @OliviaRMW on the abhorrent jokes made by Jimmy Carr about the Roma genocide.

We urge everyone to learn about Nazi persecution of Roma people and follow accounts such as @RomaSupport, @GypsyTravellers and @GypsyTravellerM.https://t.co/lqkdIQ6bWN pic.twitter.com/9SweGA8rOV

“Hundreds of thousands of Roma and Sinti people suffered prejudice, slave labor, sterilization and mass murder simply because of their identity — these are not experiences for mockery,” she added.

An estimated 200,000 to 500,000 Roma and Sinti were murdered by the Nazis during the Holocaust, according to the Trust.

In its own social media statement that was tweeted directly to Carr’s account, The Auschwitz Memorial wrote, “It’s sad to hear words that can fuel prejudice, hurt people & defile memory of their tragedy.”

“Mocking racist genocide has no place in comedy or a decent society,” Sultana wrote, also urging for its removal. “I call on @netflix to remove this grotesque material.”

The U.K.’s culture secretary Nadine Dorries suggested new laws to hold streamers like Netflix accountable for airing content like Carr’s before calling his special statements “not comedy” and “abhorrent” during a Saturday appearance on BBC Breakfast.

“We are looking at legislation via the media bill, which would bring into scope those comments from other video-on-demand streaming outlets like Netflix,” she said, according to the Guardian.

“We don’t have the ability now, legally, to hold Netflix to account for streaming that, but very shortly we will,” she later added.

I have also requested an update from @DCMS on progress to bring streaming platforms under Ofcom regulation.

My full solidarity with GRT communities, today and always. pic.twitter.com/We6MRJVyjb

Jimmy Carr’s “joke” – that a “positive” of the Holocaust was the slaughter of 500,000 Gypsy, Roma and Siniti people – is disgusting beyond words. Mocking racist genocide has no place in comedy or a decent society.

I call on @netflix to remove this grotesque material.

In the special, Carr describes the joke as “fucking funny” and “edgy as hell,” while noting a general ignorance around how the Roma and Sinti were targets of by the Nazi’s deadly campaign.

“It’s a joke about the worst thing that’s ever happened in human history, and people say ‘Never forget.’ Well, this is how I remember. I keep bringing it up,” Carr said. “There is an educational quality. Like everyone in the room knows six million Jewish people lost their lives to the Nazis during the second world war. But a lot of people don’t know, because it’s not really taught in our schools, that the Nazis also killed, in their thousands, Gypsies, homosexuals, disabled people and Jehovah’s Witnesses.”

The special begins with a general note about its contents, with Carr telling the audience, “Trigger warning: Tonight’s show contains jokes about terrible things. Terrible things that may have affected you and the people that you love. But these are just jokes. They’re not terrible things.”

“There’s a huge difference between doing a joke about a rape,” Carr says, pausing for laughter, “And doing a rape … I fucking hope.”

The Hollywood Reporter has reached out to Netflix for comment.

The controversy is the latest in a series of comments on the Holocaust and remarks made in Netflix specials that have stirred online criticism. The View co-host Whoopi Goldberg was suspended from the show for two weeks after comments she made about the Holocaust not being an issue of race, stating the Nazi Germans and Jews were “two white groups of people.” Last fall, Netflix also became embroiled in a widespread controversy over Dave Chappelle’s The Closer special, which was heavily criticized over transphobic jokes and sparked a walkout of Netflix employees.