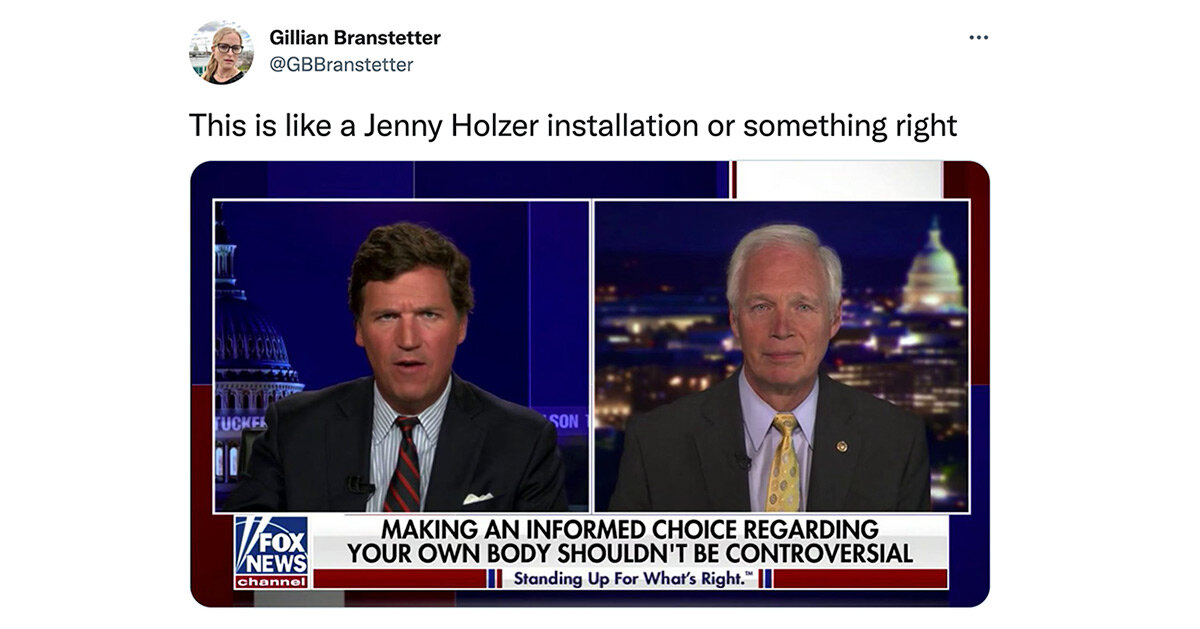 On June 24, 2022, the U.S. Supreme Court officially overturned Roe v. Wade, shocking those who support the autonomy of uterus-bearing individuals in making their own health decisions. The ruling puts an end to federal abortion rights, allowing state legislatures to decide whether the operation is still legal. As a result, it is anticipated that about half of all states will ban or severely restrict access to abortion.

With the need for reproductive resources increasing as a result of the verdict, artist Jenny Holzer created an evocative NFT (non-fungible token) to raise money for important organizations.

The image used in the digital artwork is a screen grab from American talk show and current affairs program Tucker Carlson Tonight, showing the conservative critic questioning a guest, while the chyron spells out: ‘MAKING AN INFORMED CHOICE REGARDING YOUR OWN BODY SHOULDN’T BE CONTROVERSIAL.’ Although the heading was meant to be read as an anti-vaccine remark, the words could also be a pro-choice statement.

Twitter user and ACLU employee Gillian Branstetter saw a resemblance between the chyron text and Jenny Holzer’s Truisms series, which is known for its concise phrasing and sarcastic juxtaposition. Originally presented on the streets of New York in 1977, Holzer’s Truisms nowadays emerge as independent declarations, occasionally depicted in neon, on billboards, or in a variety of merchandising formats. The phrases ‘ABUSE OF POWER COMES AS NO SURPRISE’ and ‘LISTEN WHEN YOUR BODY TALKS’ can be found among them.

A screen capture of Branstetter’s popular tweet is now being offered as an NFT in an effort to collect money for Planned Parenthood, the Center for Reproductive Rights, and PAI. ‘Bodily autonomy and self-determination can be fraught, but privacy and health are pillars of the women’s reproductive rights movement; the fight over them resulted in the establishment of protection beyond choice’, shares the Holzer on an instagram post. ‘Social health is the goal. We must protect the rights of the individual that protect the health of society’, the artist adds. The work was auctioned as an NFT on Foundation, here.