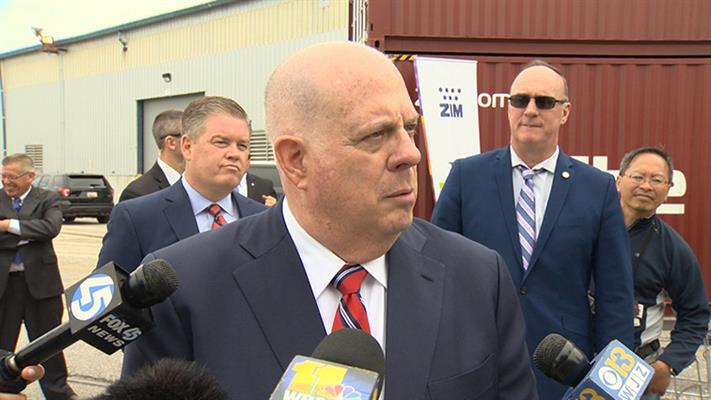 Maryland’s governor criticized metropolis leaders throughout a press convention on Tuesday as he addressed the current violence in Baltimore.

“It’s unconscionable and we’re very concerned about it obviously,” Gov. Larry Hogan stated on Wednesday as he met with reporters at an occasion on the Port of Baltimore.

“We had a meeting a while back with the police commissioner and the mayor and they put in a lot of requests, all of which we granted. We gave them, I think, $48 million, we’ve addressed everything that they have asked us to do, but we continue to have this bloodshed, and I would question whether or not they have to go back and revisit their strategy on fighting the violent crime because it’s obviously not working.”

Baltimore Police are nonetheless investigating two mass shootings that occurred inside seven hours of one another within the metropolis on Tuesday. In a kind of shootings, police say a gunman fired greater than 60 rounds on North Rose Street.

The governor additionally referred to as out elected officers for not passing his Violent Firearms Offender Act through the General Assembly.

I’m reporting reside on @wbalradio this morning from #WestBaltimore, with @C4WBAL & @BryanNehman, as @GovLarryHogan, whereas welcoming a brand new container delivery service to the @portofbalt, he was requested in regards to the violence within the metropolis. He says it’s unconscionable & uncontrolled. pic.twitter.com/vIMlBwrU2N

“We pushed for tougher sentences for repeat violent offenders and people who keep shooting people and it was opposed by everybody in Baltimore City. All the citizens, 90%, were in favor, but all their elected officials opposed it and the bill died. So, I don’t know what it is going to take to take crime seriously.”

The invoice referred to as for harder penalties for individuals who possess unlawful firearms.

According to statistics launched by Baltimore City Police on Wednesday evening, there have been 120 homicides to date this 12 months and 248 non-fatal shootings.