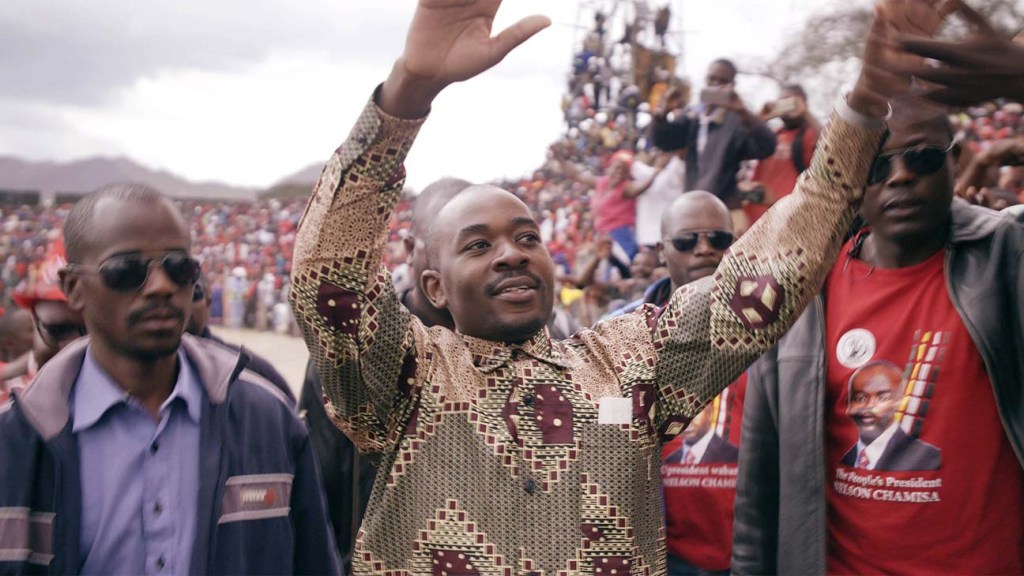 From her home in Copenhagen, Denmark, director Camilla Nielsson is fighting for justice. Justice in Zimbabwe.

The filmmaker has shot two acclaimed documentaries in the landlocked African nation: Democrats, which won the best documentary feature honor at Tribeca in 2015, and President, which premiered in Sundance in January, where it won the World Cinema Documentary Special Jury Award.

The first looks at efforts by the opposition parties allied against long-serving dictator Robert Mugabe to reform the country’s constitution and push Zimbabwe towards democracy. Mugabe’s government banned it. Only in 2018, following Mugabe’s resignation and the election of former Mugabe supporter Emmerson Mnangagwa as the country’s new president, did the country’s courts lift the ban.

President follows that election, documenting the widespread fraud that accompanied it. The film contrasts the campaign of 79-year-old Mnangagwa, known by the moniker “the crocodile,” with that of opposition candidate Nelson Chamisa, 44, running on a promise of real political change.

But when the filmmakers submitted President to Zimbabwe’s censorship board, it banned the doc as well. The constitutional court recently upheld that ban, claiming the film has the potential “to incite violence” ahead of Zimbabwe’s presidential elections next year. President had its U.S. premiere on PBS’ award-winning documentary series POV on Aug. 8. Its future in Zimbabwe, like that of the country’s democratic movement, remains unclear though.

The ban on President follows the conviction of Zimbabwean journalist Jeffrey Moyo, a freelance correspondent for the New York Times who was given a suspended prison sentence of five years for allegedly breaking immigration laws by helping two international reporters obtain press accreditation needed to enter the country. The court ruled the accreditation was fake, a charge denied by the Times.

The Mnangagwa government has also come under fire for the ongoing trial of acclaimed Zimbabwean author and activist Tsitsi Dangarembga (This Mournable Body), who was charged with public incitement to violence, breach of the peace and bigotry in connection with her participation in an anti-government protest in 2020.

Nielsen and her President producer Signe Byrge Sørensen spoke to The Hollywood Reporter via video chat from Copenhagen on their decision to fight the ban, why freedom of speech is under attack in Zimbabwe, as well as their fears that Mnangagwa’s government, elected with the promise of bringing real democracy to the country, has turned towards brutal authoritarianism.

Were you surprised by the ruling that the court in Zimbabwe upheld the ban on President? What do you think is behind this ban?

Signe Byrge Sorensen I don’t think we were surprised given the history with Democrats, which took three years to get un-banned in Zimbabwe. What you see in President, actually, shows the condition of democracy in Zimbabwe, which is also reflected in this court case. We are telling a story about a system that’s not very democratic and not in favor of freedom of speech. So in that sense, it’s not a surprise. But of course, it’s a disappointment because we want the film to be seen exactly by Zimbabweans because it’s their history in the making.

Camilla Nielsson When the current president of Zimbabwe came into power, he promised a different regime. My first film was banned under Mugabe, the former president of Zimbabwe. The new film, President, has been banned in a different political context, where there had been so much hope that things would be different this time. If you’d asked us, when we were making the film, if we thought it would be banned, we would have said no. But during the election, and in the years following, under Mnangagwa’s rule, the country has taken a different trajectory. And it has taken a long time for the court to rule. The film was released on Jan. 21 at Sundance, and we’ve been waiting since to screen the film in the country where it matters most. So it’s also disappointing to have to wait this long, and then for it to be banned.

How hopeful are you that the courts will eventually rule in your favor, as they did with Democrats?

Nielsson I think it’s probably a bit dangerous to speculate, but I think that even if we don’t win the case, the process has a purpose in itself. It’s important to get a paper record of the injustice. And, whether we win or not, it’s also important to speak truth to power when there’s an opportunity. This case will make a precedent, not just for us as storytellers, but also for Zimbabwean filmmakers, journalists and others who are struggling with freedom of speech in Zimbabwe. The democratic space is tightening as we speak: on actors, on writers, on journalists. Any kind of voice that is not in agreement with the government is under severe pressure right now. So in that sense, it’s important for us to challenge this ban.

Sorensen The whole situation is very serious. Especially for journalists, filmmakers and artists in Zimbabwe. I mean, people have been put in prison for a tweet. It’s pretty bad.

Nielsson The brutality of the crackdowns has increased to a degree where we feel it’s our obligation to help the chorus of voices rising in Zimbabwe. Something is obviously wrong in the state and in the government of Emmerson Mnangagwa. It’s also an act of international solidarity: to support Zimbabweans, in their struggle against dictatorship, and for a true and constitutional democracy.

Is there any reason for this crackdown happening now? What’s behind it?

Nielsson Well, when Mugabe was removed from power in early 2018, he had been the president/dictator since independence. So there was a lot of hope that real winds of change would arrive in the country. Mnangagwa was able to represent himself as a newborn democrat overnight. But his political history tells a different story. He has been Mugabe’s right-hand man, some call him his henchman, for almost four decades. So why anyone would expect he would turn the system around and rule in a different way, is unclear.

His crackdown on simple voter registration campaigns amongst young people is threatening to his government, as are his policies. I think it shows, at least one hopes, that this is the last kick of a dying horse. The economical situation is catastrophic. Inflation rates are higher than then they were decades ago. It’s starting to look like a state collapse. He’s trying to sort of retain this veneer that everything is fine in Zimbabwe. And when troubles bubble to the surface, he just cracks down. But it is becoming harder and harder to maintain that veneer.

Given the current situation in Zimbabwe and the crackdown that you have described, do you think you will be able to return there to film again?

Nielsson Well, thank God we can litigate the case from here in Copenhagen. But who knows what happens after that, I guess under a new government if it (will be) safe to go back. But I wouldn’t risk it currently.

Sorensen No. I mean, we shot the film with official permits given by the Ministry of Information. Everything was done according to the rules that govern these things in Zimbabwe. But given the situation and given their reaction to the film and the fact that they are saying that it could potentially “incite violence,” well that’s a pretty serious allegation. I don’t think it’s worth risking that at the moment.

I recently spoke with the Ugandan opposition politician Bobi Wine, and he said, in his country he is becoming convinced that real democracy may only come after a, hopefully peaceful, revolution.

Given what is happening now in Zimbabwe, how optimistic are you that democratic change is possible?

Nielsson I think Bobi Wine and [Zimbabwean opposition leader] Nelson Chamisa are pretty much in the same situation. They are young opposition leaders fighting against the old guard, the liberation crowd that has sung the same tune since independence. But I think that demographically, at some point, there will be a change, democratic change, in Zimbabwe. I think the opposition’s chance for the upcoming election is to make sure that as many young people are registered to vote as possible right now. I think voter registration is vital, especially in the rural areas. If they manage to engage the young, they have a chance.

That’s another issue because after you have had so many stolen elections, you get the feeling that your participation in democracy is useless anyway, so the level of apathy among young voters is high. It’s a big struggle for both Bobi Wine and Nelson Chamisa, and it’s a big battle they’re up against. But I think Chamisa is doing a good job engaging young people, especially in the rural areas in the provinces, getting them engaged in politics and registering to vote. If he manages to do that, I think there will be a limit to the extent of rigging a government can do.

This election that the film portrays in 2018 was “won” by the government party by just 32,000 votes, and that was only after the election commission withheld the results for days. God knows what happened in those days. Since the election, Chamisa has really become a more visible, much more experienced opposition leader. He’s more popular than ever. Maybe I’m naïve, but I’m optimistic. My hope is that he succeeds in engaging the young voter demographic and will be able to overwhelm Mnangagwa’s system so we don’t have another stolen election come 2023.

Is there a role to play for the international community and international media here? There was a lot of coverage, at least in the English press, on Zimbabwe when Mugabe resigned, but since he was removed, interest seems to have dropped away.

Nielsson Well, I think, as you can see in the film, that international observer teams came to the 2018 election for the first time in decades. That was one of the tools that were used to create this thin layer of democracy, this “yes please, come and observe, and we’ll be all transparent.” But I think the international community really failed the Zimbabweans in that election. They came, they observed, but, in my opinion, didn’t really scratch the surface in terms of all the rigging and the voting irregularities that took place. So, in that sense, the international community and election observers’ presence was very damaging to democracy in Zimbabwe, because, in a way, we helped legitimize Mnangagwa’s election by not raising the red flag from what was seen.

But I agree with you that there was much more media attention on Zimbabwe during the coup and after the coup. If you saw Presidents, you’ll remember the press conference with Robert Mugabe when he stepped down. I think there were 400 microphones piled up in front of him. I’ve never seen that many microphones at one press conference. There was so much hype around it, all the big media outlets were there. But once things got muddy, and the Electoral Commission started to delay the result of the [2018] vote, I feel a big part of the international media felt it was getting too complicated and took the next flight home. I think we let the people of Zimbabwe down. I think we can do better in [the upcoming election] in 2023. If we want to really engage, I think there are some serious lessons we have to learn.

Sorensen I also think that a side effect of the coronavirus pandemic has meant that a whole region of Africa has not been well covered by our [Western] media for a while. And the authorities used that to crack down even harder on the opposition, while nobody was listening in and nobody was looking. We also have some responsibility for what happens when we just look away.

This interview has been edited for length and clarity.