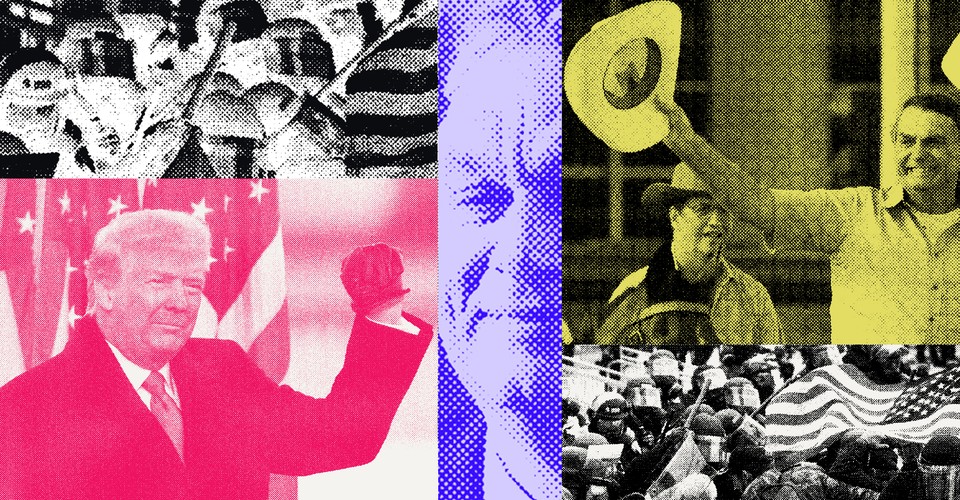 January 6, 2021, didn’t happen just to America. It also happened to the rest of the world. To watch the crisis unfold from overseas, as I did from my flat in London, was to reckon with the reality that perhaps the United States wasn’t as “back [and] ready to lead the world” as Joe Biden had claimed after his victory.

One year on, world leaders facing reelection are looking to Donald Trump’s “Stop the Steal” tactics as a playbook for how they too can sow doubt in the democratic process and, if necessary, subvert an election. U.S. diplomats, who were once tasked with promoting the virtues of American democracy, have lost credibility as liberal democracy’s defenders.

Perhaps the most notable evidence of January 6’s international effects has been the way in which some world leaders have chosen to echo the incendiary rhetoric that led to the crisis. In the past year, politicians in democracies as far afield as Israel, Peru, and Brazil have employed baseless claims of fraud in an apparent bid to forestall their own electoral defeat or, at the very least, to build up enough grievance to fuel a future political comeback. Keiko Fujimori, the daughter of Peru’s former autocratic leader Alberto Fujimori, chalked up her presidential-election loss in June to widespread electoral fraud and tried, unsuccessfully, to have the result reversed. Ousted Israeli Prime Minister Benjamin Netanyahu, who lost his premiership to an opposition coalition last year, has yet to retract his unfounded claim that he was subject to “the greatest election fraud … in the history of democracy” (though his party eventually did). In Brazil, President Jair Bolsonaro appears to be laying the groundwork for his own election-fraud claims should he lose reelection to former Brazilian President Luiz Inácio Lula da Silva later this year, as recent polls project he could.

Trump is not the first world leader who has tried to subvert an election. But by doing so from the seat of American democracy, he has emboldened politicians elsewhere to brazenly do the same. “People will have learned that if you basically say from day one that the vote—if it goes against you—is by definition fraudulent, you can get away with a lot,” Ivo Daalder, the president of the Chicago Council on Global Affairs and a former U.S. ambassador to NATO, told me. “All that stuff becomes easier when what used to be the exemplar, the city on a hill, is showing you the way.”

The risk of further efforts to undermine democracy is high in 2022, when two of Trump’s closest international allies will face reelection: Brazil’s Bolsonaro and Hungary’s Viktor Orbán. Bolsonaro, whom Trump endorsed in October, has followed Trump’s playbook by threatening not to concede if he loses (he previously said that such an outcome could only be the result of fraud) and questioning the integrity of Brazil’s electronic voting system. Orbán and his ruling Fidesz party, which earned Trump’s endorsement this week, have repeatedly claimed that European Union bureaucrats and the international left will interfere in the country’s upcoming parliamentary election.

Hungarian opposition leaders and experts I spoke with told me that Orbán is unlikely to go as far as Trump did in seeking to reverse the election result should his party lose, in large part because he doesn’t need to. The Hungarian leader has spent much of his past 12 years in power securing near-complete control over the country’s institutions and redrawing the electoral map in Fidesz’s favor. Even if he were to be voted out (recent polls give the united opposition a narrow lead), Orbán loyalists would still exert influence over key bodies, including the country’s central bank, its prosecutor’s office, and many of its state universities and cultural institutions. Unless the opposition can secure a parliamentary supermajority, that is unlikely to change.

Orbán is starting to “build the narrative” of electoral interference anyway, Péter Krekó, the director of the Budapest-based think tank Political Capital Institute, told me. For illiberal leaders such as Bolsonaro and Orbán, January 6 “widened the horizon of possibility,” Ruth Ben-Ghiat, an autocracy scholar and the author of Strongmen, told me. For authoritarian regimes such as Russia and China, it provided demonstrable proof that “the place that was a beacon of democracy is in fact liable to its own demise of democracy.”

Prior to January 6, American diplomats would always cite the U.S.’s democratic reputation to encourage other countries to abide by democratic norms and to condemn electoral subversion. Today, that kind of diplomacy is no longer an option, Brett Bruen, a former U.S. diplomat and the former director of global engagement at the White House, told me. “We have lost a lot of moral authority. We have lost the ability to say, ‘Look at us; follow us.’”

America’s democratic crisis has also changed the way in which it engages with many of its closest allies, some of whom have expressed doubts about whether Washington can still be thought of as a reliable partner. As a result, some diplomats have taken to emphasizing countries’ shared interests with the U.S., rather than just their common values, Daalder said. “A lot of diplomats are confronted with the reality that what happened on January 6 really has damaged America’s image in the world and that, therefore, if you want to get stuff done in diplomacy, you don’t talk a lot about democracy—you talk about interests.”

Read: It’s time for Democrats to break the glass

A common frustration expressed by many of the former diplomats I spoke with is that in the year since January 6, little has been done to strengthen American democracy or repair the U.S.’s reputational damage. Although Biden pledged to make renewing democracy a cornerstone of his foreign policy, resulting in a two-day virtual Summit for Democracy last month, his administration has yet to pass any legislation to expand and protect voting rights or the democratic transition of power at home.

“Having a Zoom session to try and fix some major flaws and threats in our democratic system at home and abroad is woefully insufficient,” Bruen said. Dana Shell Smith, a former U.S. ambassador and career diplomat, told me that a failure to shore up American democracy at home would invariably make U.S. diplomats’ jobs “exponentially more difficult.”

“Biden always says it’s not about the example of our power; it’s the power of our example,” Daalder said. Until the Biden administration takes steps to protect American democracy in the long term, its example will remain one of vulnerability.