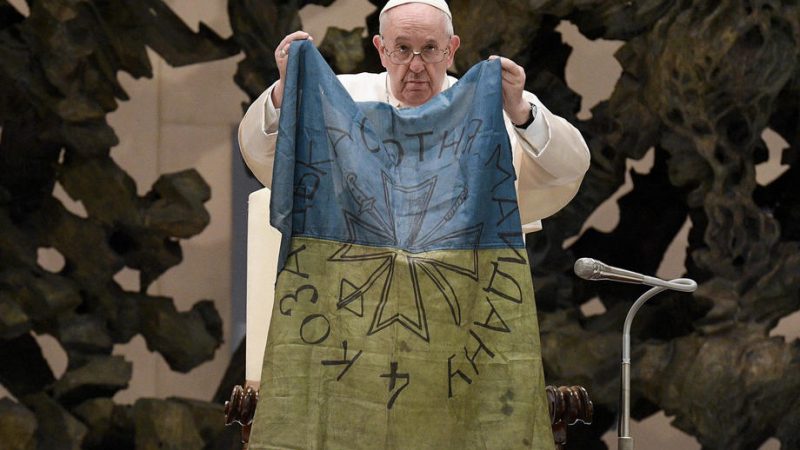 The Pope’s multilateralism in overseas coverage “began with Putin back in September 2013 and ended at the beginning of the war in Ukraine,” Schiavazzi, a journalist specialising in Vatican politics and a professor of Vatican Geopolitics at Link Campus University in Rome, mentioned.

He added that within the first week of the Russian invasion, the Pope “remained equidistant”, explaining that he was “most likely trying to take a mediation role in the conflict”.

However, the Vatican’s tone has change into more and more extra crucial in subsequent weeks.

During his go to to Malta on 2 and three April, the Pope delivered his strongest condemnation to this point.

“Once again, some potentate, sadly caught up in anachronistic claims of nationalist interests, is provoking and fomenting conflicts, while ordinary people sense the need to build a future that will either be shared or not be at all,” he mentioned.

Picking up momentum along with his rhetoric, the Pope went even additional by condemning the inaction of the United Nations whereas displaying a Ukrainian flag from Bucha.

“Today we often speak of ‘geopolitics’, but unfortunately, the dominant logic is that of the strategies of the most powerful States to affirm their interests by extending their area of economic, ideological and military influence”, the Pope mentioned.

According to Schiavazzi, the evolution to heavy criticism occurred as a result of the Pope didn’t receive his desired outcomes from Russia after making an attempt to place himself as a mediator in early March.

“The period of peace in Europe is over,” Schiavazzi mentioned, describing how, now that Europe is at struggle, the Pope considers Putin to characterize the “uncivilised world”.

These phrases mark a shift from the Pope’s beforehand extra delicate tone on Russia’s overseas wars, notably, within the case of Syria, the stance of multilateralism and mediation.

Following Syrian president Bashar Al-Assad’s chemical weapons assault on a college in late 2013, US President Barack Obama gave a speech to the nation, saying that the US should intervene in opposition to such brutalities.

At the time, the Pope wrote a letter to Putin on the event of the G20 summit, urging world leaders to hunt a peaceable answer to the battle.

Following the Pope’s name, Putin wrote an op-ed within the New York Times, asking the United States for extra cooperation in coping with Syria, respecting worldwide legislation and not directly stating the need of a Russian position within the area because the Pope requested.

“Americans were not very happy about this, of course”, mentioned Schiavazzi.

“This call back in 2013 can be seen as the attempt of the Pope to go beyond the US unilateralism on MENA region stability, but instead to contribute to the latter with an international multilateralism approach,” Schiavazzi mirrored.

The Pope’s newest feedback show a distinct course for Vatican City’s overseas coverage from this 2013 shift in the direction of multilateralism. The new rhetoric is extra explicitly against Putin and extra “westernised” in tone – one Schiavazzi described as doubtlessly “changing the world order”.