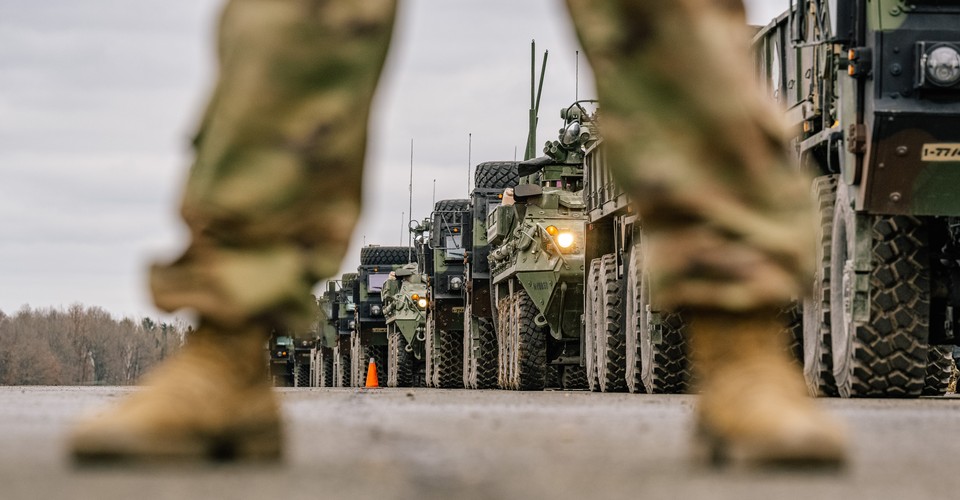 Since the start of the coronavirus pandemic, many countries have passed or invoked laws against misinformation. In the United States, content distributors like Spotify and social-media platforms like Twitter are under pressure from one faction to take action against medical misinformation and from another faction to stay viewpoint-neutral and allow all perspectives to be aired.

Email your answers to conor@theatlantic.com—I’ll publish a selection of them in Friday’s newsletter.

As Russian forces gather on the border with Ukraine, the world is preparing for the possibility of an invasion––and debating how Western powers ought to react to Vladimir Putin’s behavior.

Anne Applebaum argues that the scale of Putin’s ambitions is tremendous:

He wants to destabilize Ukraine, frighten Ukraine. He wants Ukrainian democracy to fail. He wants the Ukrainian economy to collapse. He wants foreign investors to flee. He wants his neighbors—in Belarus, Kazakhstan, even Poland and Hungary—to doubt whether democracy will ever be viable, in the longer term, in their countries too. Farther abroad, he wants to put so much strain on Western and democratic institutions, especially the European Union and NATO, that they break up. He wants to keep dictators in power wherever he can, in Syria, Venezuela, and Iran. He wants to undermine America, to shrink American influence, to remove the power of the democracy rhetoric that so many people in his part of the world still associate with America. He wants America itself to fail.

These are big goals, and they might not be achievable. But Putin’s beloved Soviet Union also had big, unachievable goals. Lenin, Stalin, and their successors wanted to create an international revolution, to subjugate the entire world to the Soviet dictatorship of the proletariat. Ultimately, they failed—but they did a lot of damage while trying. Putin will also fail, but he too can do a lot of damage while trying. And not only in Ukraine.

Stewart M. Patrick characterizes the conflict as a Russian rejection of another nation’s sovereignty:

As Secretary of State Antony Blinken helpfully explained during a Jan. 20 speech in Berlin, Putin is “laying the groundwork for an invasion because he doesn’t believe Ukraine is a sovereign nation.” Putin’s stance repudiates the Budapest Memorandum, a 1994 pledge signed jointly by Russia, the U.S. and United Kingdom, in which they agreed to respect Ukraine’s independence and sovereignty in return for its renunciation of nuclear weapons … The Biden administration and its EU counterparts have labored to present a united front, despite European fears, especially in Germany, that doing so could jeopardize the multibillion-dollar Nord Stream 2 gas pipeline project.

In contrast, David Bromwich argues in The Nation that the conflict is an example of the U.S. applying one standard to its own near-abroad and a different standard to Russia’s sphere of influence:

Ukraine shares a border with Russia the way Mexico and Canada do with the United States. Since 1823, we have claimed the right to defend our hemisphere in accordance with the Monroe Doctrine, and now Russia is putting into practice a similar policy against a militarized Ukraine. The parallels are close; the reasons for a defensive posture, obvious. Yet Secretary of State Antony Blinken has said the US no longer believes that there are spheres of influence. Or rather, there is just one sphere: the ever-expanding terrain of legitimate Western democracies approved by NATO.

In The Wall Street Journal, Walter Russell Mead calls for American boots on the ground. “There is only one option that would stop a Russian invasion—and that is the one that all the serious players in Washington say is off the table: dispatching an American and coalition force to defend Ukraine,” he writes. “Putin is not ready for war with the U.S.; informing his gamble is a well-grounded conviction that America is not committed enough to Ukraine to defend it by force. History may look back on this as a failure of nerve equal to the appeasement of the 1930s.”

There is good reason why America is “not committed enough to Ukraine” to go to war for it. The U.S. has nothing at stake there that could possibly justify taking the enormous risks that a war with Russia involves. Even the most aggressive hawks tacitly admit as much when they claim that the current crisis is just a prelude to worse things later. Mead makes the usual references to the 1930s because he can’t make a straightforward argument that Ukraine is important enough on its own that the U.S. has to defend it.

Russia hawks know they can’t sell a war for Ukraine, so they have to make it into a war for NATO or world order or something big enough to make their insane proposal seem at least slightly defensible. Their own alarmism confirms that they know the U.S. has no vital interests here.

The world of 2008 is gone. Today, an increasingly powerful China seeks hegemony in the Indo-Pacific … Americans’ security and prosperity rest upon our ability to keep that from happening, and so the United States must shift resources to the Indo-Pacific to deny China’s bid for regional domination. This means the United States can no longer carry the heavy burden it once did in other regions of the world—including Europe. To the contrary, we must do less in those secondary theaters in order to prioritize denying China’s hegemonic ambitions in the Indo-Pacific.

This Administration’s support for Ukraine’s membership in NATO defies these realities. The United States has an interest in maintaining Ukraine’s independence, sovereignty, and territorial integrity. And we should urgently deliver to Ukraine assistance it needs to defend itself against Russia’s military buildup and other threats. Our interest is not so strong, however, as to justify committing the United States to go to war with Russia over Ukraine’s fate.

In Commentary, Brian Stewart makes the case that Ukraine’s fate is actually of tremendous importance:

To ensure the continued peace of Europe—since Putin’s aggression will certainly not stop in the Donbass—greater American activism will be required. The alternative to America fulfilling its responsibilities would be a bullying behemoth acting confidently to subvert and pick off its neighbors one by one. A parade of horribles would likely follow any serious example of American retrenchment. An emboldened Russian regime vigorously pressing its claims in the borderlands of Europe would beget the disruption of critical supply chains, including energy resources and food imports to the EU. It would trigger an exodus from east to west, putting further strain on prosperous European states that have still not recovered from the refugee crisis of the last decade. Worst of all, it would unleash frightening new security dilemmas throughout Europe and in other theaters of potential conflict.

This can happen even if Ukraine is not actually dismembered by a wider Russian occupation. If Western powers conspire to prevent armed conflict by giving Russia an effective veto over Ukraine’s accession to the European Union or NATO, or if Putin is permitted to dictate the defensive capabilities of its neighbors already under the NATO umbrella, the principle of collective security and the linchpin of European order since 1945 would be nullified.

Tom McTague argues that the reemergence of Russia and China as aggressive powers in a newly multipolar world poses an imaginative challenge for those who assume the future means progress:

Suddenly, we are forced to confront the prospect that in the future we may not have “progressed” toward some more enlightened, just, and universal order. Instead, the future might be more particular, competitive, national, or perhaps even civilizational. And if that is the case, what happens if we are on the wrong side of history, not because we were necessarily wrong but because we just got beat?

At Reason, J. D. Tuccille points out that the American public is tired of war, perhaps so much so that they will help to constrain their leaders from taking an interventionist approach to Ukraine. “This country just finished (mostly) one unpleasant overseas conflict and the public shows no enthusiasm for embarking on another one that looks even less promising,” he writes. “Ultimately, the best hope for peace with Russia might be the U.S. population’s deep weariness with war.”

Many people would say climate change. Tyler Cowen worries about that problem but flags another one as his pick for the central political problem of our day:

How will we stop our new and often splendid technologies from being weaponized against us? I use the term weaponization quite literally—drone attacks, cyberattacks, hostile uses of artificial intelligence, and attacks from space, bioweapons and more. It’s good that the world is emerging from a period of technological stagnation, but therein lies a danger: It is a general principle of world history that new technologies, even the most beneficial ones, are eventually used either as weapons themselves or as instruments of warfare. That was true of the horse, the railroad, the airplane and, of course, nuclear power.

It likely will be true for these new developments, too …

Most current ideologies are unprepared for this coming new world. These problems do not have obvious solutions, nor do they offer any obvious way to confer political advantage.

The Feel of Different Decades

The essayist and cultural critic Chuck Klosterman posits that the 1990s marked the end of an era––or, perhaps, the end of eras:

If you show someone an obscure film from 1965 and then an obscure film from 1995, anyone viewing those clips will be able to recognize which one is older. But I do not think that would be the case if you showed someone a movie from 1990 and a movie from now—the difference would seem much less. Nowadays, it’s very difficult to see something from, say, 2005 and get the sense that it was 15 or 16 years ago. Time seems to be microscoping.

Provocation of the Week

Josh Barro argues in his newsletter, Very Serious, that the availability of vaccines changes the moral landscape of the pandemic:

Deaths are overwhelmingly more likely in people who have chosen not to be vaccinated … the vaccines change the nature of our collective responsibility—once individuals have the tools to protect themselves and the death rate among people who have taken available precautions has fallen drastically, the moral obligation of others to disrupt their own lives to affect the death rate decreases accordingly. With highly effective pharmaceutical interventions that only some people are willing to receive, COVID remains a tragedy but ceases to be an emergency.

The country of Denmark appears to be approaching the pandemic that way.

Thanks for your contributions. I read every one that you send. By submitting an email, you’ve agreed to let us use it—in part or in full—in the newsletter and on our website. Published feedback may include a writer’s full name, city, and state, unless otherwise requested in your initial note.