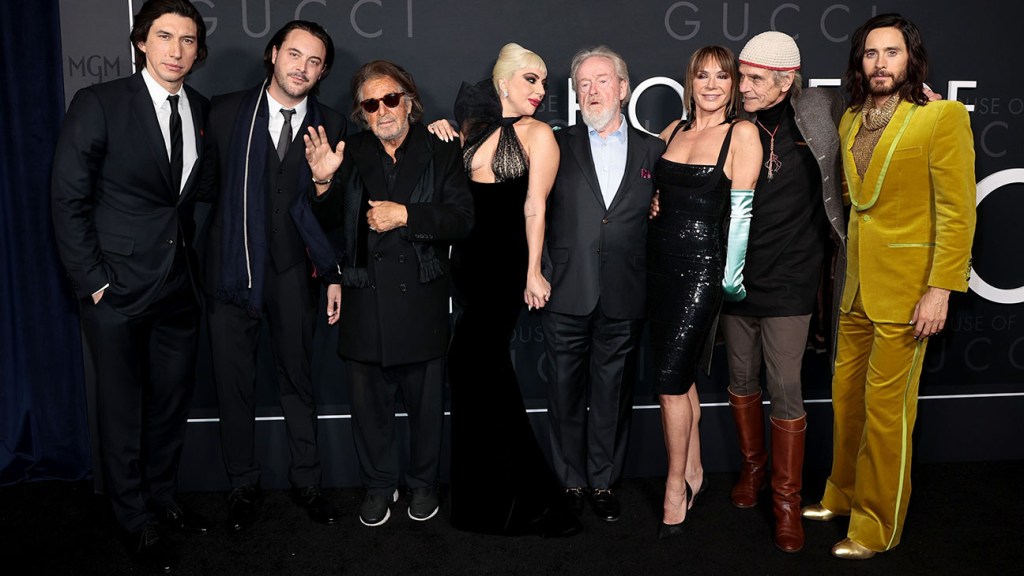 As Hollywood events return to full force in New York and Los Angeles amid the coronavirus pandemic, here’s a look at the week’s biggest premieres, parties and openings, including red carpets for House of Gucci (on both coasts), Ghostbusters: Afterlife, King Richard, Hawkeye and Scarlett Johansson’s American Cinematheque tribute.

Bruised, following a disgraced MMA fighter’s return to the ring amid the unexpected return of the young son she gave up, premiered at Hollywood’s AFI Fest on Saturday night with star and first-time director Halle Berry. Berry, appearing alongside costars Shamier Anderson, Danny Boyd Jr. and Valentina Shevchenko, said taking on the grueling on-camera performance while also helming her first film was “one of the biggest challenges of my career,” and in a post-screening Q&A with Ava DuVernay she spoke about her path going forward.

“It’s hard to say what will actually be in my future but I will say this — I know that women of color have to keep telling their stories because we have a definitive point of view,” Berry told the crowd at the TCL Chinese Theatre. “For so long, our stories have been told by men or white men or even white women. And I think it’s really important that we continue to tell our own stories through our own lens and make them valuable.”

After five nights of starry events, Hollywood’s AFI Fest closed out on Sunday with the premiere of Warner Bros.’ King Richard, plus two very special guests — the film’s subjects, Venus and Serena Williams. The sisters — who are both executive producers on the story of their journey to tennis stardom, fueled by father Richard and his extensive plans for their careers — walked the red carpet alongside Saniyya Sidney, who plays a young Venus, and Demi Singleton, who plays a young Serena, as well as Will Smith and Aunjanue Ellis, who play their parents. “We’re so grateful and so honored to be here, this obviously couldn’t have happened without this incredible story, this incredible team that we have — Will, everyone that was a part of the movie has been so amazing,” Serena told the crowd inside the screening. “So many people here have been a part of that team effort and just thank you from the bottom of our hearts. As you’ll see tonight it takes a team to make this happen.”

Elle Fanning and Nicholas Hoult debuted the second season of their hit Hulu comedy The Great at L.A.’s Sunset Room Hollywood on Sunday, where they were joined by creator Tony McNamara and costars Gwilym Lee, Sacha Dhawan, Bayo Gbadamosi and Belinda Bromilow.

Lady Gaga, Adam Driver, Al Pacino, Jared Leto, Jeremy Irons, Salma Hayek and director Ridley Scott continued their international House of Gucci tour with the New York premiere on Tuesday (with some of the cast continuing onto the L.A. celebration two days later). “Great scripts attract great actors, and we have a formidable cast,” Scott said ahead of the screening, describing the film as “a very posh-world satire.” And though the Gucci family provides the backdrop, Gaga’s Patrizia Reggiani will be taking center stage, as screenwriter Roberto Bentivegna told THR: “It was always going to be her story.” – Christy Pina

Two days after their NYC premiere, Lady Gaga, Adam Driver, Jared Leto, Al Pacino and Ridley Scott took House of Gucci to the west coast, premiering at the newly opened Academy Museum on Thursday night, where Leto reminisced on the dramatic transformation he underwent to play Paolo Gucci: “I was sad to see Paolo go.”

Hamilton Behind the Camera Awards

Kristen Stewart, Regina King, Maggie Gyllenhaal, Kirsten Dunst and Jamie Dornan kicked off award season Saturday night by honoring those who work behind the camera during the 11th annual Hamilton Behind the Camera Awards. Hosted by Insecure‘s Yvonne Orji, the show recognized those behind Spencer, The Harder They Fall, The Lost Daughter, Belfast, Dune and CODA at the Avalon Hollywood, with Mahershala Ali, Awkwafina, Maggie Gyllenhaal, Jake Gyllenhaal, Javier Bardem, Denis Villeneuve, Simon Rex and Marlee Matlin also on hand.

Dopesick stars Michael Keaton, Peter Sarsgaard, Will Poulter, John Hoogenakker, and creator Danny Strong gathered at NeueHouse Hollywood on Monday for a sneak peek of the series finale, followed by a Q&A.

Kevin Hart hosted a screening of his new Netflix limited series True Story at The Whitby in NYC on Thursday, where he was joined by writer Eric Newman, costar Billy Zane and Matthew Broderick.

After its first six episodes came out earlier this year, Gossip Girl is back with the second half of its first season, which it premiered in NYC on Thursday. Timed to the holiday, HBO Max hosted a Friendsgiving-themed pop-up in Soho, converting a five-story townhouse into a show-themed experience, with appearances from stars Jordan Alexander, Evan Mock, Eli Brown, Emily Alyn Lind and more.

GQ Men of the Year party