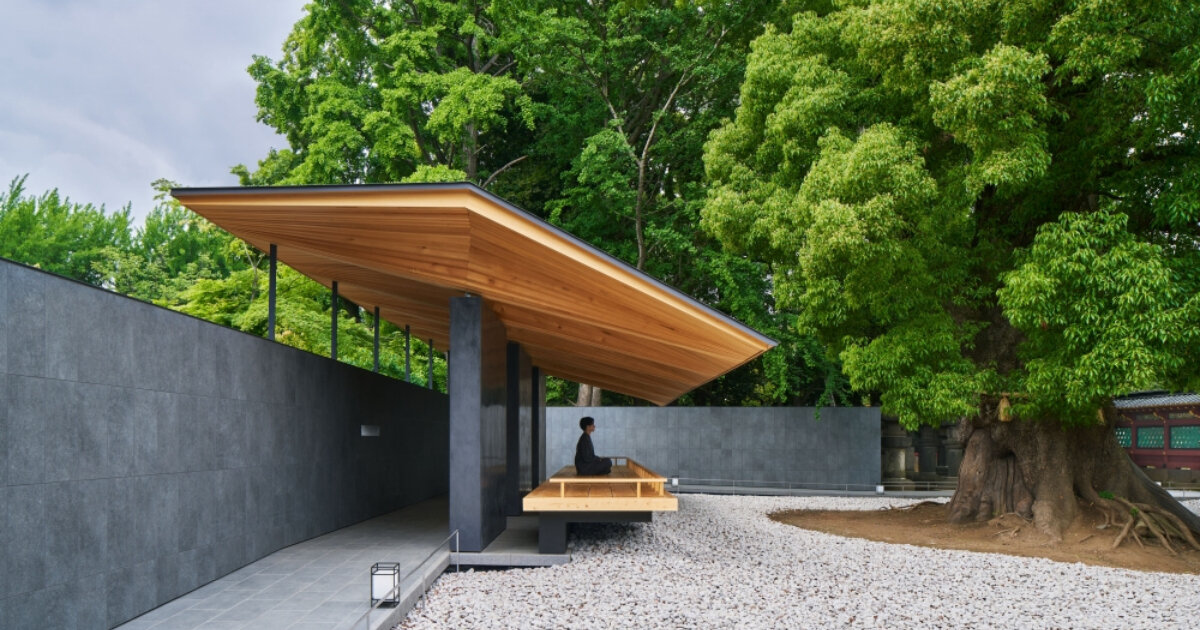 ueno toshogu shrine juyosho as a garden for praying

Japanese firm Hiroshi Nakamura & NAP designed meditation spaces and pavilions in Ueno Toshogu Shrine (built in 1627 as a shrine dedicated to Tokugawa Ieyasu) in Tokyo, Japan to invoke the nature of ‘a garden for praying.’ The first element that caught the team’s attention was the ginkgo trees surrounding the shrine, which are dubbed to have fire-resistant attributes. Of the ginkgo trees the team chanced upon during the site visit, one of the eldest was severely corroded and in danger of collapsing any minute. Before any accident could even occur, Nakamura and the site’s administration decided to cut it down.

But the Japanese architect could not see the felled tree put to waste. Instead of setting it aside, he revived the gingko tree by sawing it into boards and using them for the design’s roof, a 3-meter cantilever with a cross-sectional shape. Nakamura transformed the felled ginkgo tree into slabs of wood for the roof architecture that protects the main shrine once again. The original plan was for the Japanese architect to construct a space where visitors could receive amulets and talismans, but upon visiting the site, the desire to curate a place of prayer with the 600-year-old tree at the forefront of the blueprint came to Nakamura.

Nakamura approached the layout by creating two buildings to surround the tree. The first pinpoints the Seishin-sho where it greets visitors with its open space. The Shinpujuyo-sho, a cloister-like garden that encompasses both the open and sheltered shrines. He calls his and his team’s redesign as a place of stillness where visitors can worship and meditate with the sacred, ginkgo tree in front of them inside the shrine. The hooded sanctum outside the main shrine places the visitors among nature and the tranquility of the compound, with the decades-old ginkgo tree standing strong before them. A charcoal-colored platform lifts the wooden plank below the diamond-shaped canopy that Nakamura and his team intentionally crafted.

Nakamura transformed the felled ginkgo tree into slabs for the roof

Diamond-shaped grid point for the god of the shrine

A reflection of the assimilation of the inside and outside, Ueno Toshogu Shrine by Hiroshi Nakamura & NAP architects invite visitors to internalize their prayers and beliefs while allowing their surroundings to take care of their peaceful state of mind. In an Instagram post, Nakamura writes, ‘from the distance, one can see the double rhombus fence, which is the barrier that protects the shrine. We reinterpreted the grid to construct the roof structure of this hall of worship. The two directions that make up the diamond-shaped grid point to the important directions for the god that this shrine enshrines. At the same time, this structure allows deep eaves to emerge on all four sides of the building.’

the place is a space for praying