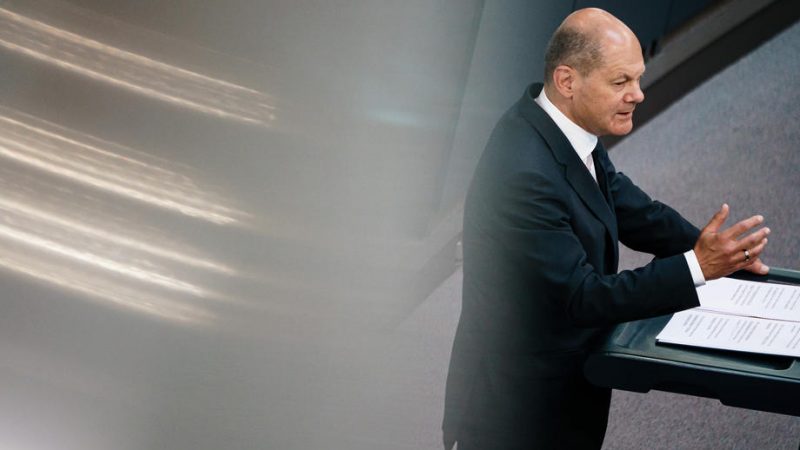 While German Chancellor Scholz has unequivocally supported Ukraine and Moldova’s bids for EU membership and urged EU leaders to accelerate the accession process of the Western Balkans, he stressed on Wednesday (22 June) that enlargement must be tied to institutional reform of the EU.

Germany has been a long-standing supporter of welcoming the Western Balkans into the bloc. Ahead of tomorrow’s European Council meeting, where EU leaders will decide on the accession bid of Ukraine and Moldova, Scholz stressed that successful enlargement is intrinsically linked to the institutional reform of the EU.

“The European Union must commit to the European future of its neighbourhood and to the necessary internal reforms,” Scholz emphasised during his government statement in the Bundestag on Wednesday.

To prepare for the accession of new members, the EU would have to revamp its internal structures and procedures.

As many policy areas – most notably foreign policy – are still governed by unanimous voting systems, Germany fears that the EU’s capacity to act could be greatly diminished if new members join the bloc.

However, EU enlargement is currently a geopolitical necessity from Berlin’s perspective, which makes institutional reforms a pressing issue.

“The decision to grant candidate status to Ukraine and Moldova is Europe’s answer to the Zeitenwende. The countries of the Western Balkans deserve the same clear answer,” Scholz stressed.

The trajectory of EU reform

The debate on EU reform has gained traction after the conclusions of the Conference on the Future of Europe in early May. Germany, France and Italy are particularly eager to press forward with the reform process.

French President Emmanuel Macron already pushed for a convention that could lead to treaty changes in early May. A similar path was also envisioned in the German coalition agreement, which called for using the conference’s outcomes as a “constitutional moment” for the EU that should lead to “further development towards a federal European state”.

However, the proposal was met with considerable resistance from Nordic and eastern European member states – with 13 EU governments criticizing the move in May.

While some of these more hesitant EU countries have since softened their resistance – most notably the Czech Republic which will hold the rotating EU Council presidency from July onwards – the stakes for EU reform remain considerably high.

However, experts have already emphasised that EU enlargement could be a bargaining chip that could ultimately lead to treaty reform. The member states most critical of EU reform are also the keenest to accelerate the accession of the Western Balkans as well as Ukraine and Moldova, which could open up gateways for institutional reform and potential packaging deals.

The push for EU reform ahead of accession rounds is not unheard of, as almost every bigger accession round was accompanied by some degree of institutional reforms.

For Germany, a fully-fledged treaty reform is, however, not the only option on the table. The current treaty framework does already allow to trigger substantial changes in the EU’s institutional set-up – most notably regarding the introduction of qualified majority voting in areas that currently require unanimity.

“I am campaigning intensively for more decisions to be taken by qualified majority in future, for example in foreign policy,” Scholz said regarding the institutional reforms and the prospect of enlargement.

A similar position has also been taken by other EU members. Next to France and Italy, Spanish Prime Minister Pedro Sánchez emphasised that EU enlargement would require the abolishment of unanimity in the EU’s foreign policy.

Enlargement could be bargaining chip to trigger EU-Reform

While the calls for EU reform are gaining momentum, several member-states oppose the proposal for treaty change. In the end, EU enlargement could be the main bargaining chip to launch the reform process.

Europe is engulfed in a discussion for EU …