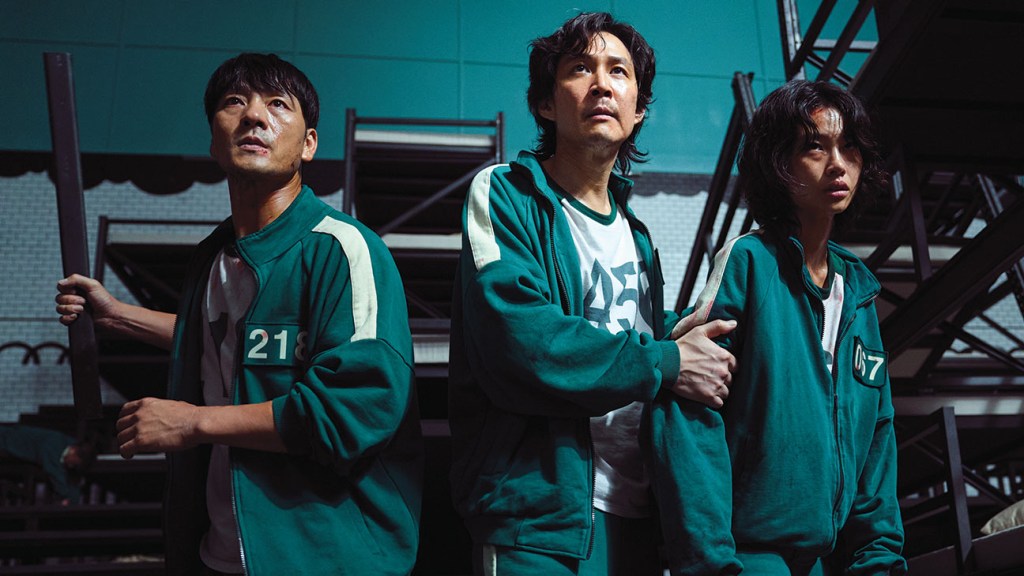 DANIEL FIENBERG In mid-October, Netflix CEO Reed Hastings did an earnings interview dressed in one of the trademark teal tracksuits from the South Korean sensation Squid Game. Were you to stage a snapshot for television in the fall of 2021, you couldn’t contrive a more perfect image: a billionaire executive wearing a costume from a series about the life-and-death desperation of economic inequality. And he was doing so in an attempt to raise stockholder enthusiasm and boost that uniform’s promotional second life as a Walmart tie-in. Somebody is going to cash in on Squid Game, and it won’t be anyone who, like the series’ characters, is in such dire financial straits that they find themselves playing kids’ games where the options are unimaginable wealth if you win, and carnage if you don’t.

The intersection of economic aspiration and economic desperation was everywhere on TV this fall. The two most discussed shows were that subtitled smash satirizing the gap between the soulless rich and the near-suicidal poor and HBO’s long-awaited third season of Succession, which satirizes the soulless rich while fetishizing their private jets, palatial apartments and colorful deployment of obscenities. This follows a summer in which my two favorite shows — FX on Hulu’s Reservation Dogs and HBO’s The White Lotus — illustrated comparable disparities.

Angie, is there something in the Perrier, or is this just a coincidence?

ANGIE HAN Why not both? There’s a bit of luck in the fact that these two shows have emerged as the most talked-about ones of the fall — especially Squid Game, which seemingly no one saw coming. But no, I don’t think it’s a coincidence that class-conscious shows more broadly seem to be taking off in the U.S. at a time when income inequality is about as bad, and as visible, as it’s ever been.

In that context, Squid Game and Succession are two sides of the same coin. Both are concerned with showing how money warps people, robbing them of their dignity, their compassion, their morality. And both pull it off by creating characters who feel painfully, unassailably human. You can hate the Roys and ache for them at the same time. You can feel sympathy for the Squid Game contestants and still appreciate how messy and flawed and downright unlikable they can be. That’s how you write a show that takes aim at the whole system, and not just individual heroes or villains existing within it.

It’s a balance I don’t think every show strikes quite as well. I loved Maid and found it impossible not to root for Margaret Qualley’s Alex — but I couldn’t help noticing that she’s very much written as the “right” kind of poor person, who’s not going to seriously challenge our assumptions about who does or doesn’t deserve comfort and security.

What makes or breaks a show’s exploration of class for you, Dan?

FIENBERG Maid works because it gets the details right, showing every step of the economic ladder and how the system is designed to remove rungs just when you need them most. It reveals a legal system that benefits those with the resources to treat it as a long con as well as the various government safety nets that are so full of gaping holes that those who need them most easily slip through. It also works because Qualley excels at welcome notes of broad comedy that keep Maid from becoming poverty porn and because she wordlessly conveys the sort of nuance that too many writers would just as soon patch over with exposition.

Look at the dueling Rust Belt miserabilism of Hulu’s Dopesick and Showtime’s American Rust, dramas that lead with their research or their low-lighting atmosphere instead of any sort of authentic character-building.

Dopesick occasionally gets away with it because Kaitlyn Dever is exceptional at avoiding blue-collar condescension. American Rust suggests mainly that the writers have seen The Deer Hunter and that the actors should be lauded for the illusion that they’re not wearing makeup. The opioid epidemic and how it enriches Big Pharma and has turned swaths of Middle America into wasteland should make it the most important and wide-ranging story of our moment. But rather than creating compelling drama from this awful truth, these two shows made me want to read a good nonfiction book instead.

The key is probably, as you suggest, character. If you want to make a documentary, make a documentary. Otherwise, build characters an audience will invest in. And that doesn’t have to mean “likable.” Yes, a show like Fox’s The Big Leap — call it Squid Game with a parasitic reality show offering its own version of blood sport — succeeds mainly because every character, even Scott Foley’s amoral producer, is as eager to please as a video of a forlorn dog that traveled 3,000 miles to find its original owners. But nobody would accuse any member of the Roy family of pandering for affection. Whether it’s Connor’s hubris or Roman’s perversity or Shiv’s duplicity, I just want to see what they do next.

Meanwhile, there are huge swaths of people whose lives don’t lend themselves to either extreme. Class can sometimes seem invisible in stories about people who are middle class — comfortable enough not to have to think about it too hard, but not so pampered that they seem out of touch. But if we’re talking about how fall TV deals with class, I think it’s worth looking beyond just the shows that expose the opposite ends of the spectrum.

Take The Baby-Sitters Club. Its Stoneybrook, Connecticut, isn’t a super-divided community; the characters range somewhere between lower- and upper-middle class. But I appreciated that the second season touches upon class anxiety in ways even kids can understand, with stories like Kristy’s move to a posher neighborhood, where she faces different expectations and rules of behavior. Or Mallory’s worry that her friends are helping her out with a family birthday party because they see her as a charity case.

Likewise, The Wonder Years is specific about the Williams family as a Black middle-class family in 1960s Alabama. Their economic status is inextricable from our understanding of Dean’s hopes of being the “Great Uniter” by bringing Black and white kids together, or Kim’s interest in Black Panther Party activism.

Plus, these shows feel like reminders that you can be smart about that stuff and also fun and funny and sweet. We’ve talked a lot about some of the season’s darkest shows; which ones filled you with joy?

FIENBERG You just mentioned my favorite! ABC’s The Wonder Years is a miracle show. In a moment of soulless reboots and remakes, Saladin K. Patterson has used an established brand name to tell a personal story shaped by specificity, one that nobody would have let him do if it were called Regional Black Middle-Class Life After the Reverend King’s Assassination. And during a fall in which Apple TV+ kept going after big-ticket sci-fi audiences, my favorite of their new shows is Acapulco, an ’80s-set coming-of-age story. The working-class young man at its center hopes his job at a Mexican oceanside resort will be his gateway to wealth, or at least to paying for his mother’s medical bills.

HAN It’s hardly news that specificity is key to good storytelling, but I think it’s demonstrated so clearly in many of the shows we’re talking about. My favorite new Apple TV+ show of the fall — and one of my favorite new shows of the fall, period — is Swagger, which also deals with a young man (a kid, really) with big dreams of moving up in the world as a basketball player. This is a show that has paid attention to such crucial details as how its characters fit into a larger community and what they might think or joke about when we’re not watching them. That’s why it can tackle sensitive issues like race, class and abuse without feeling all Very Special Episode-y — Swagger is coming at these matters from the perspective of characters it has taken the time to understand on a bone-deep level.

Shoot, we never got around to Foundation or Ghosts or season three of You. But perhaps it’s time to turn our attention to what’s coming up next season … ah, a Joe Millionaire reboot, you say? See you back here in a few months for another conversation about economic anxiety on television, I guess.

This story first appeared in the Nov. 10 issue of The Hollywood Reporter magazine. Click here to subscribe.