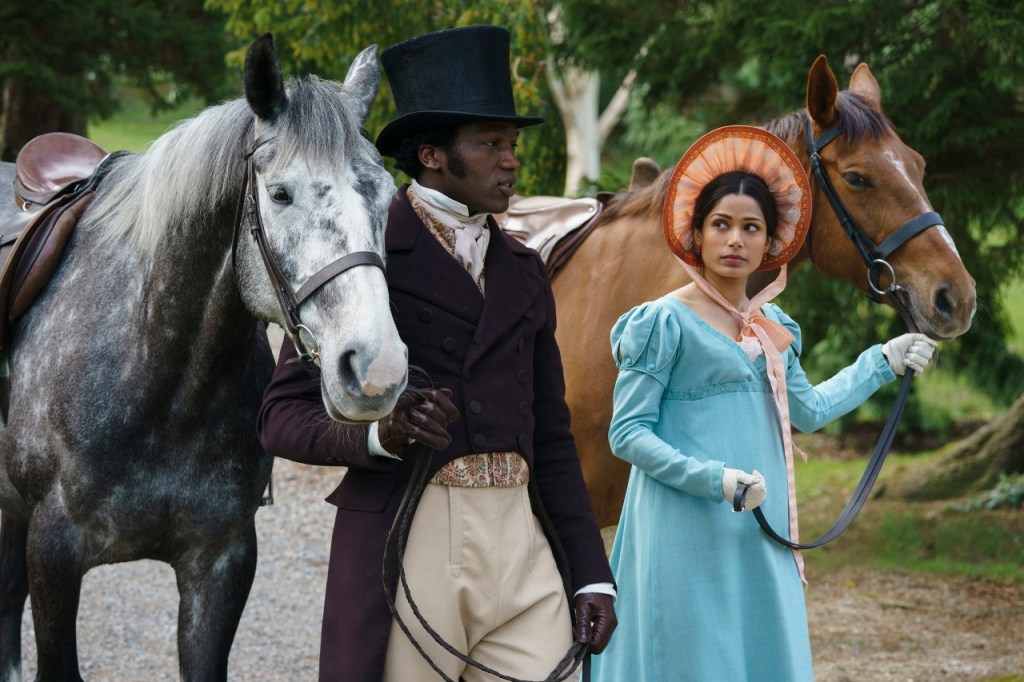 A romantic comedy of manners with a multiracial cast set in London’s 1818 Regency era, “Malcolm” only sounds as if it’s a spin-off of the Netflix hit “Bridgerton.”

The short was meant “to drum up financiers for a feature-length film” only the pandemic squashed that — until “Bridgerton” arrived.

“People saw the potential of a Regency period romance in a different light,” Pinto noted of this story, which begins with Mr. Malcolm (Sope Dirisu) courting Julia Thistlewaite (Zawe Ashton).

She is furious when he rejects her, prompting a revenge plot centered on Pinto’s Selina Dalton, who is from the country and a childhood friend of Julia’s.

“Julia thinks the best person to take revenge on Mr. Malcolm is Selena, because she believes Selena has the education Mr. Malcolm would be impressed by,” Pinto explained. “She could train her to flutter her eyelids and make Mr. Malcolm fall in love with her.

“Selina is part of Julia’s ploy but is unaware of what she’s walking into. Only Mr. Malcolm is so charming and so real that she sees through all of the facade that he puts on in society, and really starts falling in love with him. This is obviously going to be a problem for Julia because she didn’t mean for Selena to really fall in love with Mr. Malcolm.

“So Selena has her own little hill to climb: She comes to the city looking to reconnect with her friend and also maybe find love along the way. But she least expects to find it with someone like Mr. Malcolm, which is a fun little twist in the tale.”

Mumbai-born, Pinto achieved immediate international stardom with the Oscar-winning “Slumdog Millionaire” followed by “Rise of the Planet of the Apes” (2011).

She’s since had an education maintaining her career.

“One of the smartest things anyone ever said to me” — it was Dustin Hoffman! — “was that this career, the dream that we’ve chosen for ourselves, is all about peaks and valleys.

“Peaks are great. Valleys, of course, you feel very low and dejected. But I discovered that it’s in the valleys that I find my next calling. When there’s been a really low moment, that’s when I went out and started producing.

“I’ve learned in order for me to feel satisfied with having an international career, I have to take charge myself.”