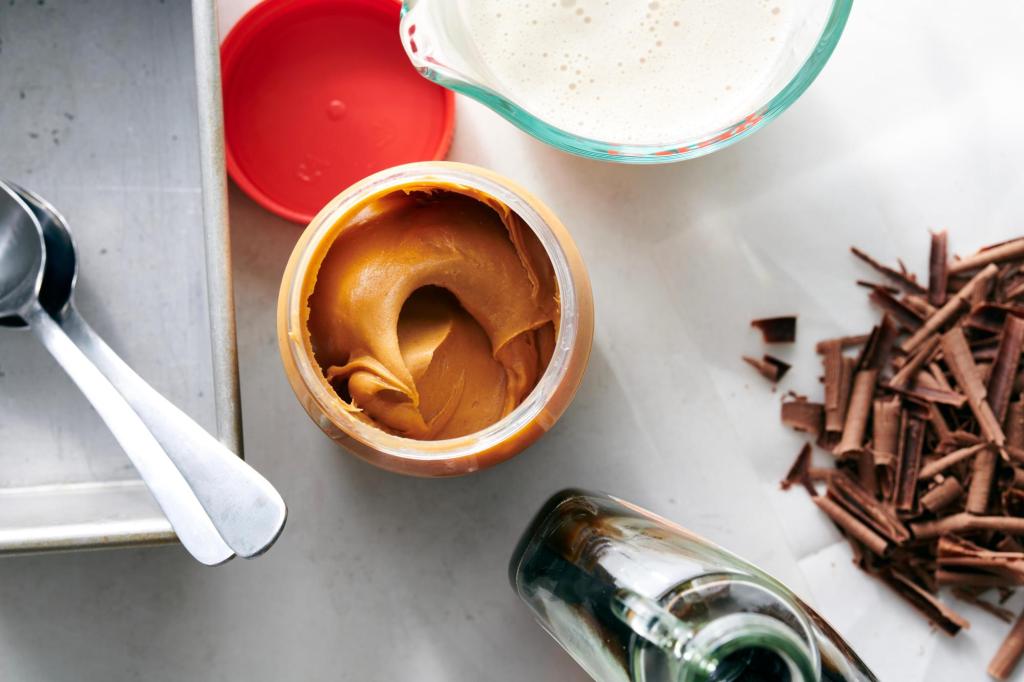 The usual path to homemade vegan ice cream is slicked with dairy-free milk — almond, coconut, cashew, hemp. But there’s another option that gives you an even richer, plusher result: oat creamer.

With their inherent starchiness, oats can help thicken and stabilize frozen desserts, keeping ice crystals at bay. Many vegan ice cream recipes call for added starch, like arrowroot powder or cornstarch, but oat creamer, a relative newcomer to the alternative milk market, eliminates this need.

Another advantage is oat creamer’s mild, subtle taste. Unlike, say, assertive coconut milk, it lets the flavor of the more important ingredients shine.

In this easy, no-churn peanut butter-maple ice cream, the oat creamer and the nut butter are whirled in a blender with maple syrup, a pinch of salt and a splash of vanilla. Then, the mixture is transferred to a metal loaf pan and thrown into the freezer, only to be pulled out a few hours later — a creamy frozen dessert that’s like the inside of a peanut butter cup melting silkily on your tongue.

The only actual cooking involved is simmering the maple syrup for a few minutes to condense it. Doing so both heightens the maple flavor and evaporates excess water, which can lead to iciness.

Other nut butters (almond, cashew, hazelnut) will also work, if you feel like experimenting. Just make sure to choose ones without added sugar or risk a more cloying flavor.

As with any ice cream — vegan or dairy — scooping is always going to be far easier if you take the container out of the freezer at least 10 minutes and up to 30 minutes before serving. This allows the ice cream to soften slightly, but without collapsing into pudding.

If you wanted to really play up the peanut butter cup link, you could serve this topped with chocolate of some variety: sprinkles, chips, shavings, fudge sauce, cookie crumbs. But I love to savor scoops unadorned. That way I can fully appreciate the silky texture, a difficult thing to achieve in homemade vegan ice cream. Until now, that is.

1. In a small saucepan over medium-low heat, simmer maple syrup, stirring occasionally, until the mixture reduces by a third, 8 to 12 minutes. Remove from heat and let syrup cool completely, stirring it occasionally as it cools. You should have about 1/2 cup.

2. Place syrup, creamer, peanut butter, vanilla and salt in a blender or food processor (or use an immersion blender), and blend until smooth, 30 seconds to 2 minutes. Pour ice cream into a loaf pan.

3. Cover and place in the freezer to harden overnight or for at least 4 to 6 hours. Remove pan from the freezer at least 10 minutes before scooping and serving, topped with chocolate shavings or sprinkles, if you like.

Tip: You can substitute other nut butters (almond, cashew, hazelnut) for the peanut butter. Just make sure to choose ones without added sugar or it may end up too sweet.

This article originally appeared in The New York Times.