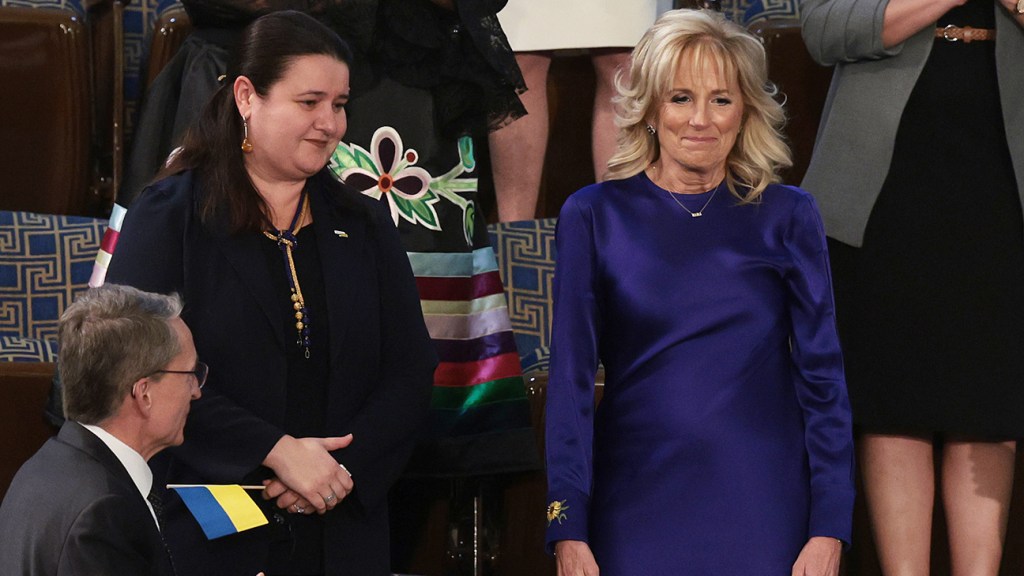 First Lady Jill Biden honored Ukraine on Tuesday evening, March 1, with the dress she wore to President Biden’s State of the Union speech, a long-sleeved sheath in a hue meant to evoke the blue of that country’s flag.

From the Pre-Fall 2022 collection of designer Sally LaPointe, the dress is crafted of double-faced satin and was recently acquired by Dr. Biden’s team. A representative for the designer confirmed that it was not custom-designed for the First Lady or for the occasion, and indeed this is the first time Dr. Biden is confirmed in a design from the New York-based label. “As an American designer and as an American woman, it was a huge honor to have dressed Dr. Jill Biden for the State of The Union Address tonight,” LaPointe told The Hollywood Reporter exclusively.

A unique detail, also believed to be a tribute, appears to have been added to the dress recently. An embroidered sunflower — the national flower of Ukraine and a growing symbol of its citizens’ resistance to Vladimir Putin’s invasion — could be seen on the right sleeve near the wrist. LaPointe’s representative confirmed that her studio did not produce this embellishment.

Among Dr. Biden’s guests was Oksana Markarova, ambassador of Ukraine to the United States, who was one of many attendees holding a miniature flag of Ukraine in the House Chamber of the Capitol Building. Markarova put her hand on her heart when she was introduced by President Biden.

Dr. Biden was far from alone in signaling her support of Ukrainians via sartorial choices seen at the State of the Union. Among the women in attendance Tuesday, many wore one or both of the Ukraine flag’s shades of blue and yellow, including Senator Amy Klobuchar, Indiana representative Victoria Spartz, and Michigan representative Brenda Lawrence.

Many men in the audience likewise chose to take part in the night’s dominant color theme, wearing blue or yellow ties. California representative Eric Swalwell was among several people sporting scarves in the colors of the Ukrainian flag, while House minority leader Kevin McCarthy wore a Ukrainian lapel pin and pocket square. The trend also extended into State of the Union coverage, with MSNBC’s Nicolle Wallace garnering attention on Twitter for the blue and yellow floral blouse she wore Tuesday night, which many assumed to be a sign of support for Ukrainians.