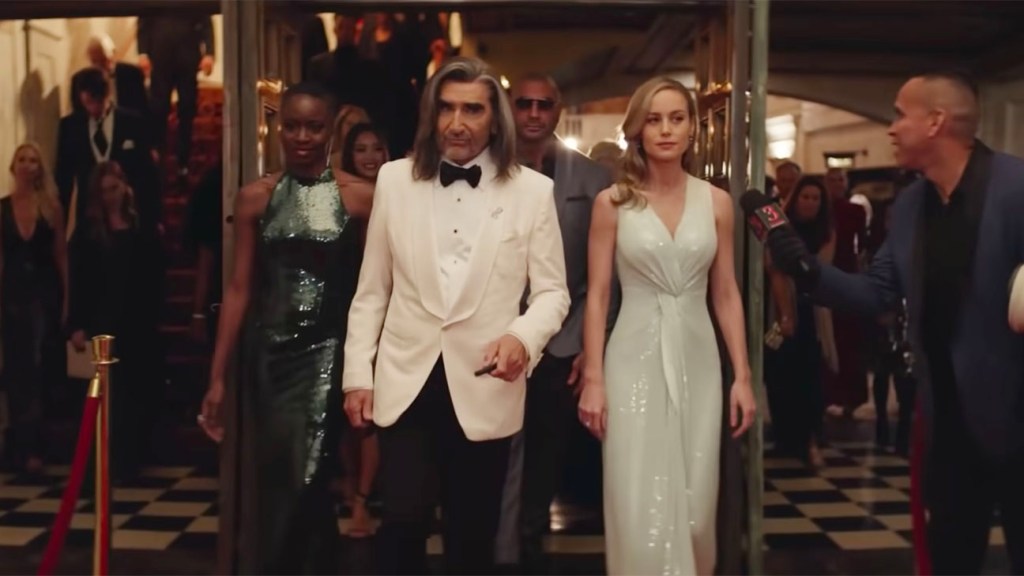 Eugene Levy’s newest role is far away from his beloved run on Schitt’s Creek. As a matter of fact, Levy could spin laps around Johnny Rose, literally, courtesy of Nissan.

The spot opens with Levy walking across a studio lot on what seems to be a regular day until he happens upon Larson and the Z. Intrigued by the car, Levy takes it for a spin — driving modestly at first until he embraces the full “Thrill Driver” persona. The joy ride transforms into an action movie, with Gurira and Bautista playing Levy’s co-stars, and he also gets a makeover complete with sunglasses; long, flowing hair; knuckle tattoos; five o’clock shadow and a black leather jacket. In true action hero mode, he delivers the one-liner, “Cock-a-doodle-do,” before performing a dangerous car stunt. Before it ends, Levy is snapped back to reality and finds himself alongside Gurira, Bautista, O’Hara and Larson in a packed movie theater watching the film’s premiere.

“It’s not often something like this gets presented to you,” Levy told The Hollywood Reporter of the opportunity. “[The] premise alone was unbelievably exciting.”

The commercial is Levy’s first Super Bowl ad, and it comes a year after son, Dan Levy, starred opposite a gaggle of M&Ms in a big game spot of his own and on the heels of a Capital One commercial he did with daughter, Sarah Levy. In advance of the Nissan ad debut, The Hollywood Reporter caught up with Levy about what he looks for in ads (with or without his kids), his transformation into action hero and the rumors about a possible Schitt’s Creek film.

We’ve never seen you like this. What was your first thought when the concept was presented to you?

It’s not often something like this gets presented to you, where you have a body of work that you’re known for, but they’re actually trying to make you into something you never thought you would be, which is an action hero. That premise alone was unbelievably exciting. A lot of credit goes to our hairstylist, Ana Sorys, who worked on Schitt’s Creek for a number of years with us. It was her vision for this look, and it was a complicated idea that had to be executed beautifully or I don’t think it would’ve worked. It was executed beautifully on all fronts.

What was the experience of filming a high-profile spot like this?

[Director Craig Gillespie], who has done action so well in other spots, had such a cool demeanor on set that he kept everything low-key and fun. I never felt any pressure at all about, “Oh my God, am I gonna be able to pull this off?” because he kept everything so light and pleasant and fun. It was truly a fun day and a half for me. Normally when you’re sitting in a car for a day and a half, it’s usually kind of a claustrophobic experience, but honestly, there were a lot of laughs. I credit Craig for setting that tone.

The spot is titled Thrill Driver — what kind of driver are you?

I would say I’m a great driver. My wife might disagree with that. I guess maybe I tend to go a little fast, but I’ll hold up my driving record to anybody’s.

I loved the spots with Betty White [for Snickers]. That was an amazing, funny spot and kind of the best one in the bunch. My son, Dan, had an M&M commercial last year that I thought was pretty good. That was really something, I loved that one. Those were my two faves so far.

We’ve seen you pop up in a few ads over the years, even recently with your daughter. How do you decide what to say yes to?

I love the Capital One spot because I love those ads, you know? I worked with [Samuel L. Jackson] many years ago. Great guy. Just to be able to say, “What’s in your wallet?” has always been one of those things. The idea of doing it with my daughter was really appealing because we said right up front, this has to be a scene. It can’t be a commercial where we’re kind of pushing a message down people’s throats. It’s gotta be a pleasant scene, very reflective of Schitt’s Creek. They said, “That’s fine, that’s what we’re looking for, too.” The idea of being able to do that little scene with Sarah was exciting. You want to make sure there’s just the right tone of humor. You want to make sure that it reflects who you are and reflects your sensibility. Certainly, this Nissan spot did that for me. It was just designed that way. I didn’t really have to do that much. That’s what kind of [made it] special.

You’re debuting in a Super Bowl ad one year after your son had his M&Ms spot featured during the Super Bowl. Will the Levys be together to watch the big game on Feb. 13?

It’s quite possible if I can get him more interested in football, but I will be watching it. I will be home and probably watching with my family, my daughter, Sarah, and her husband, Graham. We’ll see whether Dan actually can make it, but I wouldn’t bet money on it.

Who are you rooting for — Rams or the Bengals?

There’s always been talk that there will be a get-together at some point with the cast, whether it’s a movie or a sort of special or something. That is always gonna be kept alive. But there’s nothing definitive in the foreseeable future, in the near future, let’s put it that way.