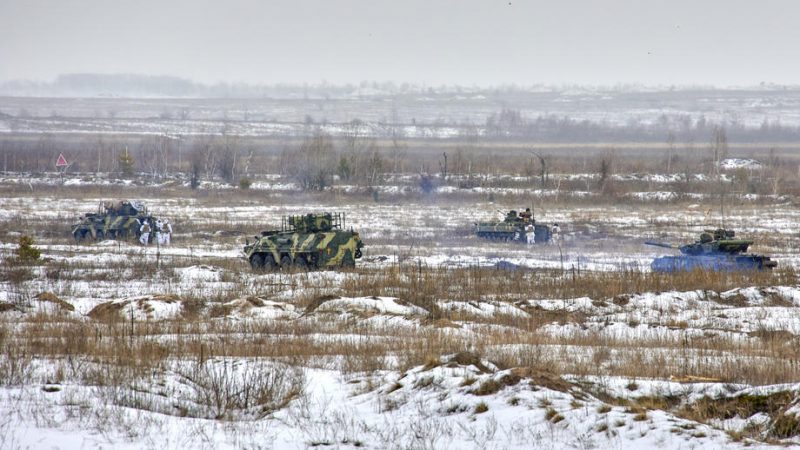 The European Union’s diplomatic service told its non-essential staff in Ukraine on Friday (11 February) to leave the country as several EU countries issued warnings over growing fears of a Russian invasion and US President Joe Biden said “things could go crazy quickly”.

“We are not evacuating. For the time being, the non-essential staff has been given the opportunity to telework from outside the country,” the EU’s lead foreign affairs spokesperson, Peter Stano, told reporters.

“We continue to assess the situation as it develops in line with the duty of care we have towards our staff and in close consultation and coordination with the EU member states,” he added.

A few weeks ago, EU diplomats said they regretted the US decision to evacuate diplomats’ families from Kyiv at that point in time as it could be interpreted as a sign that the West accepts such a scenario.

‘Stay calm’ EU tells US as Ukraine braces for the worst

While Ukraine is bracing for the worst, a possible Russian invasion, EU diplomats on Monday (24 January) regretted the US decision to evacuate diplomats’ families from Kyiv could be interpreted as a sign that the West accepts such a scenario.

The comments came as the Netherlands, Latvia and Estonia urged their citizens to leave Ukraine, among the first European member states to do so.

At the same time, non-EU countries UK and Norway joined Washington in urging their nationals in Ukraine to leave the country as soon as possible.

Britain’s Foreign Office said on Friday evening it now “advises against all travel” to Ukraine and said “British nationals in Ukraine should leave now while commercial means are still available”.

“Since January 2022, the build-up of Russian forces on Ukraine’s border has increased the threat of military action,” it stressed, adding that “any Russian military action in Ukraine would severely affect the British Embassy Kyiv’s ability to provide any consular assistance”.

The Norwegian Ministry of Foreign Affairs cited the “serious and unpredictable security situation” as it called on its nationals to leave Ukraine. It also advised against any trip to Russia “closer than 250 km from the Ukrainian border”, and also to Belarus, except the capital Minsk.

The announcements came as several US media reports quoted Western defence officials as saying the US believes Russian President Vladimir Putin has decided to invade Ukraine and has communicated that decision to the Russian military.

US President Joe Biden’s national security adviser, Jake Sullivan, was quoted by the New York Times as saying “we continue to see signs of Russian escalation, including new forces arriving at the Ukrainian border,”

Sullivan said an invasion could begin “during the Olympics,” which are scheduled to end next week, and warned that all Americans should leave Ukraine in the next 24 to 48 hours.

He later clarified that the White House has not concluded that Putin gave the order to invade.

Meanwhile, a virtual meeting to discuss the situation was convened for late on Friday with the leaders of the United States, UK, Italy, Poland, Romania, France, Germany, the European Council, the European Commission and NATO.

At the same time, NATO ambassadors convened in Brussels for an extraordinary meeting, according to diplomatic sources.

“We won’t go into the details of the discussions but Allies continue to consult closely about Russia’s continued military build-up in and around Ukraine,” a NATO official said when asked by EURACTIV about the purpose of the talks.

“All Allies have been clear that Russia must de-escalate,” the NATO official added.

US Secretary of State Antony Blinken said earlier on Friday Russia was amassing yet more troops near Ukraine and an invasion could come at any time, perhaps before the end of this month’s Winter Olympics.

In his starkest warning to Americans to date, President Biden said he would not send troops to rescue US citizens in the event of a Russian assault.

Russia is now massing yet more troops near Ukraine and an invasion could come at any time, perhaps before the end of this month’s Winter Olympics, US Secretary of State Antony Blinken said on Friday.