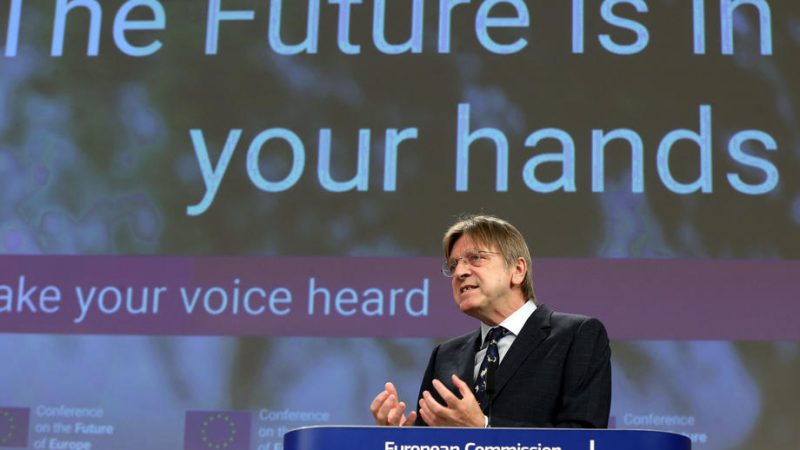 Despite participants’ fears that the Conference on the Future of Europe (CoFoE) is not making headlines and therefore might not be as impactful as hoped, a European Parliament spokesperson has reassured them that the media is listening and their voices will be heard.

The CoFoE is an EU democracy experiment where citizens from the 27 member states discuss and suggest policy proposals through local events, panels, and an online platform. At the conclusion of the panel rounds, proposals will be submitted to EU lawmakers for consideration.

While panel participants in the conference are happy to take part, over half said in a recent online discussion that they had not seen any media coverage. This has prompted fears that their proposals might not be taken seriously due to a lack of public pressure.

Answering questions sent by EURACTIV, a spokesperson dealing with the event, said that while the conference has not been “breaking news”, there has been steady media interest.

“Many key journalists and media have been very interested in following this unprecedented democratic exercise and in speaking with the citizens taking part. A lot of coverage has also been in the local and regional media,” they said.

Additionally, they expressed hopes that coverage would pick up as the panel’s recommendations move into the political spotlight in December and January.

“Our data on ad hoc accreditation shows that close to 300 journalists overall came to the inaugural event, the two plenary sessions, and the first round of sessions for the four European citizens Panels.”

From these, the spokesperson said, “around 3000 news reports were identified during the first three months of the process” with a further 620 in September and October.

Furthermore, the spokesperson wanted to reassure participants that mechanisms are in place to ensure that both citizens and MEPs voices will be heard.

Over half of the online panel participants on Friday (5 November) said they had not seen media coverage of CoFoE and noted that interest at national level was lacking.

“I tried to speak about this to media representatives, but here in Cyprus, Europe seems like something far away,” one participant said.

Asides from media disinterest, some participants lamented a lack of time for discussion and the apparent cramming of too many topics into a short time window.

“There are too many topics to discuss, and there is no time at the end of group discussions to make a proper sum up. There is not enough time to speak about proposals, only keywords or general ideas,” said one of the citizens involved in the initiative.

Despite these stumbling blocks, the majority were happy with how CoFoE is progressing.

“I spoke about the conference to friends and relatives, who were fascinated by the whole thing. They are also interested in how the work will continue,” one of the participants enthused.

Participants felt that the institutions had a genuine interest in hearing what they had to say and wanted to involve them in policymaking. In addition, almost all said they had told friends and family about the conference.

“I also told a journalist about my experience, and he wrote an article about it,” a participant said during the discussion.

How does it work?

The four thematic panels embrace a wide range of topics: the first is related to social aspects of education, employment and digitalisation, the second to democracy, rights and security, the third to the environment, climate change, and health, and the last one to foreign policy, and migration.

Each panel met for a first session in Strasbourg during September and October, where people could discuss the assigned themes in separate groups and plenary. Participants had the opportunity to debate with experts and with MEPs and EU officials involved in the conference.

In November, all panels will meet online every weekend to continue the discussions started in Strasbourg. Then, they will meet in different European cities for the third session.

To round it off, all the panels will present their proposals to MEPs in Strasbourg: 20 “ambassadors” have been selected randomly to complete this task.

CoFoE represents a significant occasion for citizens to be heard and contribute to EU institutions’ running. Still, for participant confidence to grow, the concerns over media coverage need to be resolved.