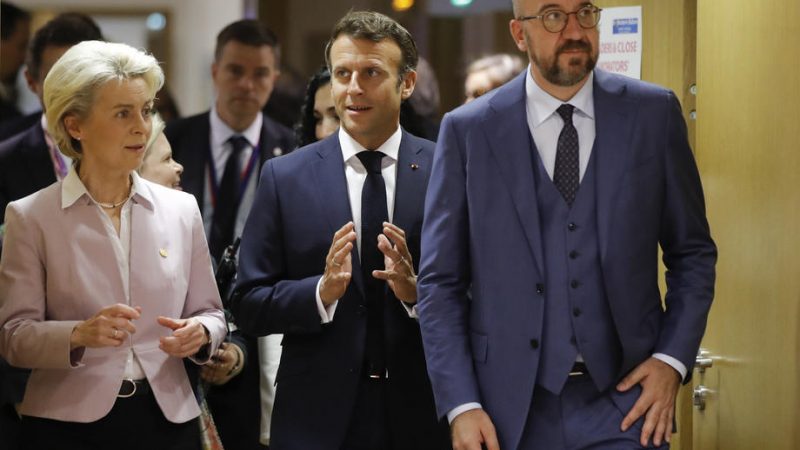 Although this is the first step in a long process, it is seen as a significant morale boost, especially for Ukraine, which has applied to become an EU candidate only days after Russia invaded the country on 24 February.

“A historic moment,” European Council President Charles Michel said after the decision. “Today marks a crucial step on your path towards the EU.”

According to the EU’s accession process, it could take Ukraine and neighbouring Moldova years to qualify for actual membership, and the decision is a symbolic step that reflects the bloc’s intention to send a political signal to the troubled region.

The European Commission has laid out a series of conditions for Kyiv and Chisinau to fulfil, including on bolstering the rule of law and fighting corruption, before they can progress to the next stage, which is the start of actual accession talks.

“I am convinced that they will move as swiftly as possible and work as hard as possible to implement the necessary reforms,” European Commission President Ursula von der Leyen told reporters after the decision.

EU diplomats and officials agree that Ukraine’s EU membership bid would not have moved forward as quickly as it has but for the war.

Ukrainian President Volodymyr Zelenskyy commended EU leaders’ for their decision to grant Ukraine candidate status and described it as “a unique and historical moment” in Ukraine-EU relations.

The EU’s chief diplomat Josep Borrell and Ukraine’s Foreign minister Dmytro Kuleba said in a joint statement Thursday’s decision “marks the beginning of a long journey that we will walk together”.

“We will immediately launch the preparation for the integration of Ukraine into European structures and ultimate membership into the European Union,” they said.

“Russia’s military aggression will not succeed in depriving people in Europe of the right to live a normal, decent life. Ukraine will win. Europe will prevail,” they added.

EU leaders also agreed to offer Georgia a “European perspective” but said it must carry out a raft of steps before it can become a candidate.

The granting of candidate status does not equal the beginning of accession negotiations, which would also require unanimous approval from all EU member states.

Turkey was granted candidate status in 1999 and opened accession negotiations in 2005, while North Macedonia became a candidate in 2005 but remains in the bloc’s waiting room, just like its Western Balkan neighbour Albania.

Bosnia-Herzegovina and Kosovo, two other countries in the region, have been “potential candidates” for years.

Speaking alongside the two EU leaders, French President Emmanuel Macron said the EU has taken “giant steps” to get both countries ready for candidate status in time for the EU summit.

“We owe it to the Ukrainian people,” he added.

He hinted at his “European Political Community” as a relevant and effective tool to keep the EU’s neighbours strategically close whilst going through the “slow steps” of accession, and avoid “enlargement fatigue”.