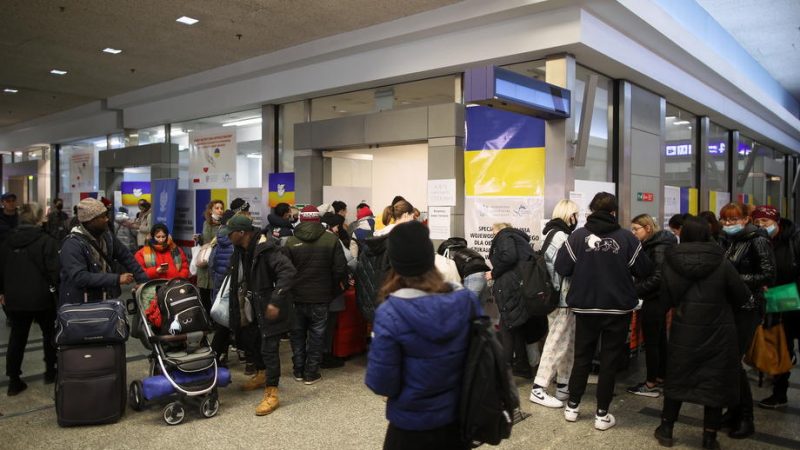 The European Commission has proposed that those fleeing the war in Ukraine should be granted “temporary protection” in the EU, while border checks should be simplified. EU interior ministers will decide on the matter on Thursday.

The proposal put forth by the Commission on Wednesday (2 March) is meant to “offer quick and effective assistance to people fleeing the war in Ukraine” and would see the 2001 Temporary Protection Directive activated for the first time.

For as long as the directive remains in force, Ukrainians could stay in the EU without going through a formal asylum application. They would also be given access to education, healthcare, and the labour market.

“Europe stands by those in need of protection,” European Commission president, Ursula von der Leyen, said about the launch of the proposal. “All those fleeing Putin’s bombs are welcome in Europe”.

While the proposal first needs to be approved by the member states, the Commission is optimistic that the 27 home affairs ministers will decide in favour during their meeting on Thursday.

While two or three national delegations had questioned whether the EU-level measure would be necessary on top of national ones, there was widespread support for the proposal among member states, a senior Commission official said.

However, an EU diplomat stressed that the ministers would only vote in principle during the meeting, while a formal decision on activating temporary protection could only follow after additional technical preparations, expected to take several days.

Under current rules, Ukrainian citizens can enter the EU visa-free but only stay for 90 days. If activated, the temporary protection status would apply for one year but could be extended to three.

However, the directive would not apply to all third-country nationals, most of which would be assisted in repatriation by the EU rather than being given a residence permit.

According to the Commission, there are currently around 600 refugees arriving in the EU every hour. The new measures would allow member states to temporarily relax border checks for anyone coming from Ukraine, regardless of their nationality, to simplify the entry process.

“We are working to facilitate efficient crossings at the borders for people and their pets, with the necessary security checks,” Commission vice-president Margaritas Schinas said.

To reduce waiting times at the border, member states would perform border checks after the arriving Ukrainian refugees have been transferred to a safe location.

This way, it would be possible to cross the border even without a biometric passport, “or any passport at all,” the Commission official said. “While there would still be a check of, for example, fingerprints against all national and European databases, (…) this does not necessarily take place at the border,” they added.

According to the Commission, special rules could also ease restrictions on vulnerable groups, such as children.

The proposal also includes measures to enhance burden and responsibility sharing between the member-states. The directive provides solidarity measures in the form of relocation and material assistance, which aim at relieving the pressure from member states bordering Ukraine.

However, the relocation and assistance for host states remain voluntary. Instead of setting out quotas for relocation, the Commission placed its bets on a more “fluid approach,” an EU-Commission official has said.

Member states can outline their reception capacities through the so-called Solidarity Platform, and the Commission will then coordinate with other countries to ensure a balance of efforts.

However, member states aim to relieve Eastern EU countries primarily via material assistance rather than through relocations.

“Nobody is talking about relocation at this stage,” an EU diplomat said, as the countries most affected are not seeking relocation thus far.

Furthermore, Ukrainians can travel throughout the bloc under the visa-free regime and will likely move to the regions with the most significant Ukrainian diaspora.

While the solidarity scheme is voluntary, the Commission is confident that member states are willing to participate in this process.

Most EU countries – among them Germany and France – have already indicated that they would be willing to admit refugees to assist the EU’s Eastern members if needed.

“The spirit of solidarity you see at the moment is a strong one,” a Commission senior official said on Wednesday.